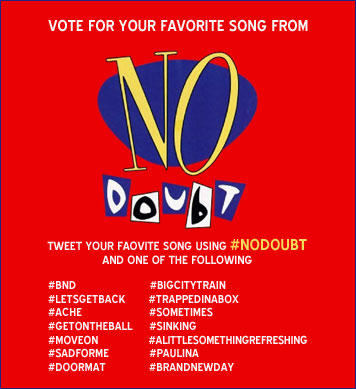 How awesome is this?! No Doubt announced on the official site that as they are rehearsing and putting together a setlist for their upcoming Gibson shows,they want the fans to share their favorite pre-Tragic Kingdom song! We can vote for our favorite songs from the self-titled and Beacon Street Collection albums on Twitter and facebook by following the instructions below-be sure to vote for your favorite and hopefully No Doubt will perform it live!

2,) Facebook – Vote for your favorite song from The Beacon Street Collection in the poll right here.