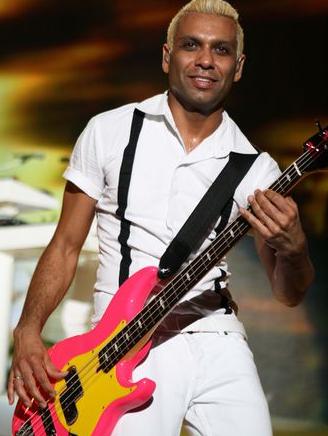 Tony recently gave an interview to OC Weekly in which he talked about the new No Doubt album and he and Erin’s new baby girl,Coco-it’s sweet to read Tony’s quotes about his daughter and great to have more confirmation that the album will be out sometime this year(followed by a tour!)

Early this week we caught up with Tony Kanal to talk about Sublime’s Bradley Nowell (watch out for OC Weekly’s 15th death anniversary tribute to the late, great frontman tomorrow).

Kanal had all sorts of stories to tell, but these days, he’s all about his four-month-old baby girl, Coco Reese Lakshmi Kanal. “Once you have a baby it’s a whole different world,” he said. “It’s the best thing that ever happened to me,” he gushed. “It’s so amazing.”

He also talked about their upcoming album, which he says is “super exciting.”
As we all know, No Doubt is busy working on the new album right now. So when is that dropping? “We wrote all last year, and we’ve been recording all this year,” Kanal said. “We took a break in February cause I had a baby, Tom had his third son, and Adrian is having a baby next month!”

So what’s the likelihood that any of the No Doubt babies will form their own band when they get older? Kanal laughs out loud. “We’ll see what happens.”

Then he adds, “I don’t know if I want Coco to be a musician. I think I want her to be a scientist.”