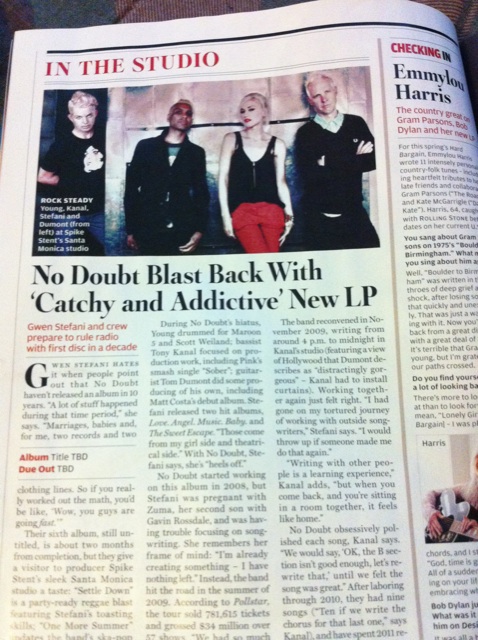 Thanks SO much to Christal for the scan and Beacon Street Online for the partial transcription,there is a new one-page No Doubt article in the new issue of Rolling Stone(Katy Perry is on the cover.) The article features a new photo of the band that was taken on June 3,and mentions that the album is about two months from being completed;the article also gives more of a description of ”One More Summer” and Settle Down”! It’s so exciting to see these new interviews and know that the wait is almost over! In the meantime,if anyone who gets the new Rolling Stone would like to share an HQ scan of the ND article,feel free to send it in!

*UPDATE JUNE 23* Thanks so much to @NODOUBTNEWS for sharing bigger scans of the article,we were able to post a full transcription of the interview!! No Doubt Blast Back with ‘Catchy and Addictive’ New LP

Album Title: TBD (To Be Determined)

Due Out: To Be Determined

Gwen Stefani hates it when people point out that No Doubt haven’t released an album in 10 years. “A lot of stuff happened during that time period,” she says. “Marriage,babies and for me,two records and two clothing lines. So if you really worked out the math,you’d be like,‘Wow,you guys are going fast.’ ”

Their sixth album,still untitled,is about two months from completion, but they give a visitor to producer Spike Stent’s sleek Santa Monica studio a taste:“Settle Down” is a party-ready reggae blast featuring Stefani’s toasting skills;“One More Summer” updates the band’s ska-pop sound with pounding dance beats,arena-size guitars,and a beyond-catchy chorus:”One more summer/One more weekend/I’m your lover/You’re my weakness”. Drummer Adrian Young tells his bandmates he can’t wait to play the song live: ”I might lose control and shit all over myself.”

During No Doubt’s hiatus,Young drummed for Maroon 5 and Scott Weiland;bassist Tony Kanal focused on production work, including Pink’s smash single “Sober”;guitarist Tom Dumont did some producing of his own,including Matt Costa’s debut album. Stefani released two hit albums,Love.Angel.Music.Baby. and The Sweet Escape. “Those come from my girl side and theatrical side.” With No Doubt,Stefani says,she’s “heels off.”

No Doubt started working on this album in 2008,but Stefani was pregnant with Zuma,her second son with Gavin Rossdale,and was having trouble focusing on songwriting. She remembers her frame of mind:“I’m already creating something —I have nothing left.” Instead,the band hit the road in the summer of 2009. According to Pollstar,the tour sold 781,615 tickets and grossed $34 million of 57 shows. “We had so much fun”,Stefani says. ”Backstage,we had all the nannies and the babies and the blowup swimming pools”. (The four members of No Doubt now have eight children between them. [EIT edit-This article was written before the arrival of baby Magnolia Young.] Dumont remembers his son Ace,then three,acclimating to life on the road. ”He’d say,’Daddy,where’s catering?’ ”)

The band recovened in November 2009, writing from around 4 p.m. to midnight in Kanal’s studio(featuring a view of Hollywood that Dumont describes as “distractiongly gorgeous” —Kanal had to install curtains). Working together again just felt right. “I had gone on my tortured journey of working with outside songwriters,” Stefani says. “I would throw up if someone made me do that again.”

“Writing with other people is a learning experience,” Kanal adds,“but when you come back,and you’re sitting in a room together, it feels like home.”

No Doubt obsessively polished each song,Kanal says. “We would say, ‘OK,the B section isn’t good enough,let’s re-write that,’ until we felt the song was great. After laboring through 2010, they had nine songs (“Ten if we write the chorus for that last one”, says Kanal),and have spent 2011 recording them with Stent.

”It’s so exciting to have a record coming out”,Stefani says,almost vibrating with glee. ”And we all want the same thing:for it to be modern,catchy and addictive.Once you make music that connects with people,it’s like you taste blood-you can’t go back”.-Gavin Edwards

EDIT-Kind of off-topic,but in the cover story of the same Rolling Stone issue,Katy Perry mentions how gracious Gwen was to her when Katy first came to LA and met her;Katy has an opposite opinion of another female artist who remained nameless,lol.

“I remember coming to L.A. for the first time and meeting Gwen Stefani and how gracious and wonderful she was.”

“Then I met another favorite artist of mine and what a c–t she was. It ruined my dreams of that person, that c–t. I will always be a fan of the person who was gracious.”

6 thoughts on “New No Doubt Article in Rolling Stone!”