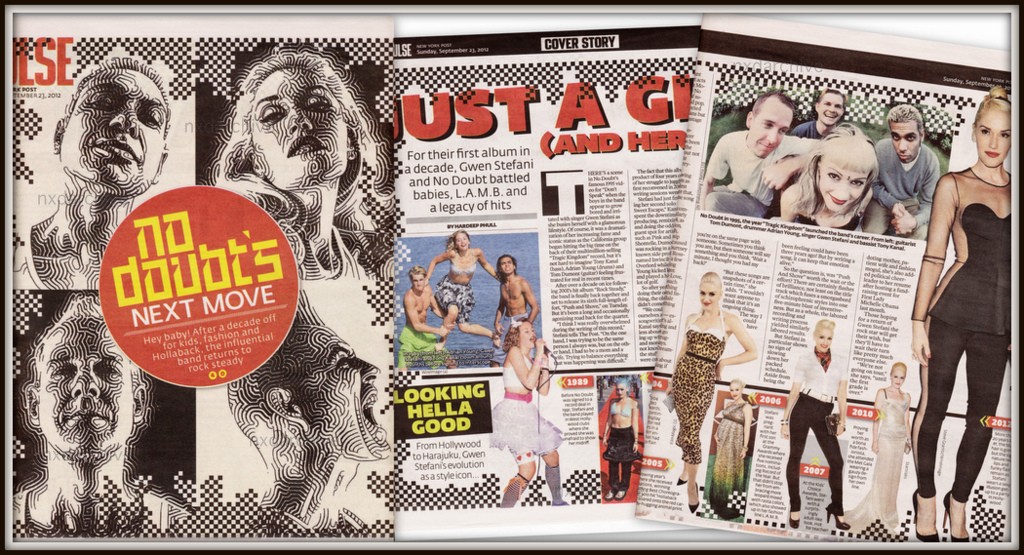 UPDATE: Thanks so much to nxdarchive for sharing a scan of the article from today’s New York Post!!

Check out a new No Doubt interview with The New York Post.

There’s a scene in No Doubt’s famous 1995 video for “Don’t Speak” when the boys in the band appear to grow bored and irritated with singer Gwen Stefani as she busies herself with a glamorous lifestyle. Of course, it was a dramatization of her increasing fame and iconic status as the California group began hitting the big time on the back of their multimillion-selling “Tragic Kingdom” record, but it’s not hard to imagine Tony Kanal (bass), Adrian Young (drums) and Tom Dumont (guitar) feeling frustrated for real in recent times.

After over a decade on ice following 2001’s hit album “Rock Steady,” the band is finally back together and set to release its sixth full-length effort, “Push and Shove,” on Tuesday. But it’s been a long and occasionally agonizing road back for the quartet.

“I think I was really overwhelmed during the writing of this record,” Stefani tells The Post. “On the one hand, I was trying to be the same person I always was, but on the other hand, I had to be a mom and a wife. Trying to balance everything that was happening was difficult.”

The fact that this album is the product of four years of toil is proof of her struggle to juggle. The group first reconvened in 2008 but early writing sessions went nowhere fast.

Stefani had just finished promoting her second solo album, “The Sweet Escape,” Kanal had spent the downtime producing, remixing and doing the odd guest spot for artists such as Pink and Shontelle, Dumont was rocking in a little known side project named Invincible Overlord while Young kicked back and played a hell of a lot of golf.

So after years of doing their own thing, the old magic didn’t come easily.

“We couldn’t find ourselves as far as songwriting goes,” Kanal says. “It was less about coming up with stuff and more about not knowing if the stuff we were coming up with was any good. The last time we made a record, we were in a completely different situation. We’d be at the studio all night, then go straight to a club and party and get inspired to get back into the studio and write more material.”

Scheduling around Stefani didn’t help matters. The singer was occupied with her clothing lines, L.A.M.B. and Harajuku Lovers, and soon became pregnant with her second child with husband Gavin Rossdale of grunge-rock band Bush.

The guys had their own families brewing. Dumont and wife Mieke now have three boys, ages 6, 4 and 1. Kanal and his girlfriend, actress Erin Lokitz, have an 18-month-old girl. Young and wife Nina have a 10-year-old son and a 15-month-old daughter.

It was a combination that meant the No Doubt reunion was looking impossible until the band decided to try giving their creativity a jolt by going on tour in 2009. A 100-day jaunt across America, with support acts as varied as Paramore, Janelle Monae and even Katy Perry, saw No Doubt unleashing its brand of supercharged ska, dancehall and pop.

The tour not only reconnected them with their millions of fans but the energy they mustered onstage helped reunite the group.

“That was the defining moment,” recalls British producer Mark “Spike” Stent, who has been in league with the band for the past decade. “They started out not really knowing what to write about, but after the tour, everything started to gel.”

“It really got the juices flowing again,” agrees Kanal. “As soon as we got home we wrote our first song, “Undercover,” and after that, I think we averaged about one song a month.”

Stefani, however, still had commitments elsewhere, particularly to newborn son Zuma, now 4, as well as her first child, Kingston, now 6. Her family life, though, hasn’t always been rosy. Gossip about Rossdale’s past flings caused disquiet, especially when Courtney Love told Howard Stern that Rossdale had slept with her “and a few other people” after committing himself to the No Doubt singer.

Stefani, in stark contrast to Love, remains typically coy about such rumors but admits that if nothing else, the occasional friction and fissures between her and Rossdale have at least given her something to write about.

“If you’re in a relationship — especially a long-term one — it’s always evolving and you always go through struggles,” she says. “The song ‘Dreaming the Same Dream’ is about questioning if you’re on the same page with someone. Sometimes you think you are, but then someone will say something and you think, ‘Wait a minute, I thought you had my back?’

“But these songs are snapshots of a certain time,” she adds. “I wouldn’t want anyone to think that it’s an ongoing thing. The way I could have been feeling could have been three years ago! But by writing a song, it can keep that emotion alive.”

So the question is, was “Push And Shove” worth the wait or the effort? There are certainly flashes of brilliance, not least on the title track which fuses a smorgasbord of schizophrenic styles into one five-minute blast of inventiveness. But as a whole, the labored recording and writing process yielded similarly labored results.

But Stefani in particular shows no sign of slowing down her packed schedule. Aside from being the doting mother, patient wife and fashion mogul, she’s also added political cheerleader to her resume after hosting a fundraising event for First Lady Michelle Obama last month.

Those hoping for a return of Gwen Stefani the rock star will get their wish, but they’ll have to wait their turn like pretty much everyone else.

“We’re not going on tour,” she says, “until the first grade is over.”