Thanks so much to Courtney(whose photos and story we had posted HERE) for sharing more details about Gwen’s Harajuku-themed tea party at Royal/T Cafe on June 7;she revealed that every guest at the tea party received different items in their gift bags-and they all sounded awesome!! (Courtney says she received a sample L.A.M.B. top that resembled the one Gwen wore to the 2006 American Music Awards-and it was likely THE one,since it came from Gwen’s closet!) Other items included various L.A.M.B. items and Harajuku Lovers goodies.Some lucky fans were also able to win prizes in a raffle that benefitted Save the Children’s Japan Fund.

Everyone had something different. I had a white L.A.M.B top (a sample, “from Gwen’s closet”), a Harajuku Lovers notebook, and a printed out note explaining what’s in the bag. Sis had a picture of No Doubt (that she got autographed that night!) and HL notebook. The lady next to me got black L.A.M.B sweats and a ND pic. There was a raffle done at each table. 10 people per table, 5 winners got a prize. A lady at my table won a really cool L.A.M.B t-shirt that had a quote from Magic’s in the Make up on it. A guy won a tank top (women’s, of course). I won HL perfume, but I gave it to my sister since I brought her for her 21st bday. Girl had to get a prize since I’m the one who got Gwen’s shirt! I’ve been hoping to see everyone’s loot.

Thanks as well to Emily for sharing her photos from the event: 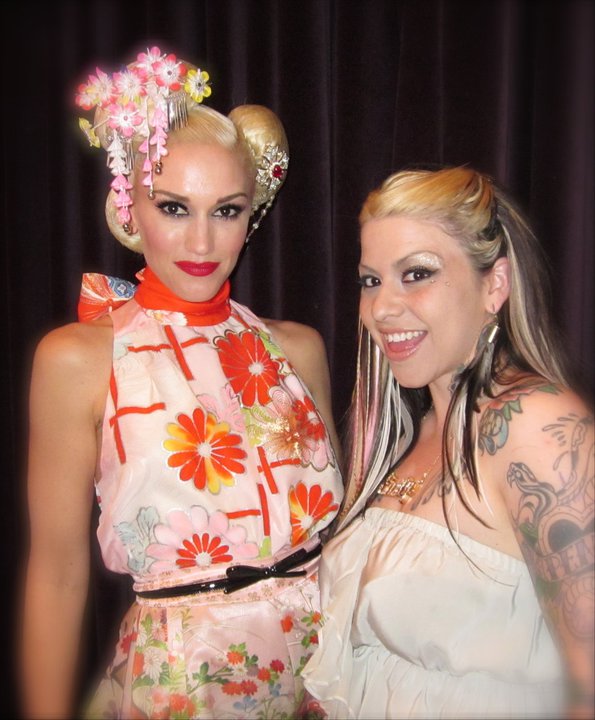