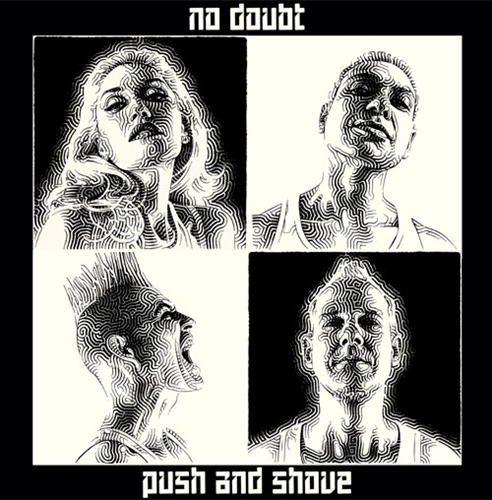 Billboard.com has posted an exclusive article on the Push And Shove cover art,with quotes from artist El Mac and Tom on the process. The article also features quotes from producer Spike Stent on working on the album with the band. The site also mentions that No Doubt’s Billboard cover story will be available to read on August 13.

How long did it take to make No Doubt’s “Push and Shove”? “I told my mate when I first left for L.A., ‘See you in six weeks,’ ” U.K. producer/engineer Mark “Spike” Stent says. “Five years later, literally almost to the day, I’m still here.”

In August, 2007, Stent – who co-produced 5 tracks on 2001’s “Rock Stready” (and also mixed and produced on Gwen Stefani’s solo albums) – first flew to Los Angeles to discuss a new record with the band. One meeting turned into two years of planning as each member’s families continued to expand.

Once writing and recording began in earnest in 2009, Stent played referee among the band to make sure each member’s input was being heard. One thing everyone agreed upon: it had to be a record that could translate live.

“Everyone wanted it to feel like it was a band playing this rather than everything just programmed and sampled,” Stent says. “My angle was to work with all the 80s influences they love but also trying to make it a modern record as well.”

Just as the music on “Push and Shove” is a return to No Doubt’s roots, so is the album’s cover, as Billboard exclusively reveals here. The four custom portraits were photographed and then rendered manually into paintings by Los Angeles street artist El Mac, known for his murals across Hollywood and L.A.’s Mid-City.

El Mac’s work had been a longtime favorite of Stefani, who has collected several of the artist’s pieces over the years and tapped him to work on the album cover earlier this year. The portraits may look simple, but were actually a long labor of love for El Mac.

“It was a month and a half of non-stop work – barely sleeping, barely doing anything but just painting. It was an epic job for me,” El Mac recalls. “It’s a tricky photo-realistic way of painting the patterns because they have to look right up close but have a different experience when you look at them from far away. There was a lot of back and forth.”

The results thrilled guitarist Tom Dumont, who hopes the original portraits make it to an L.A. art gallery at some point after the album’s release. “We’re all very interested in contemporary art and street art,” he says. “so to now have a footprint in that world is so cool.”