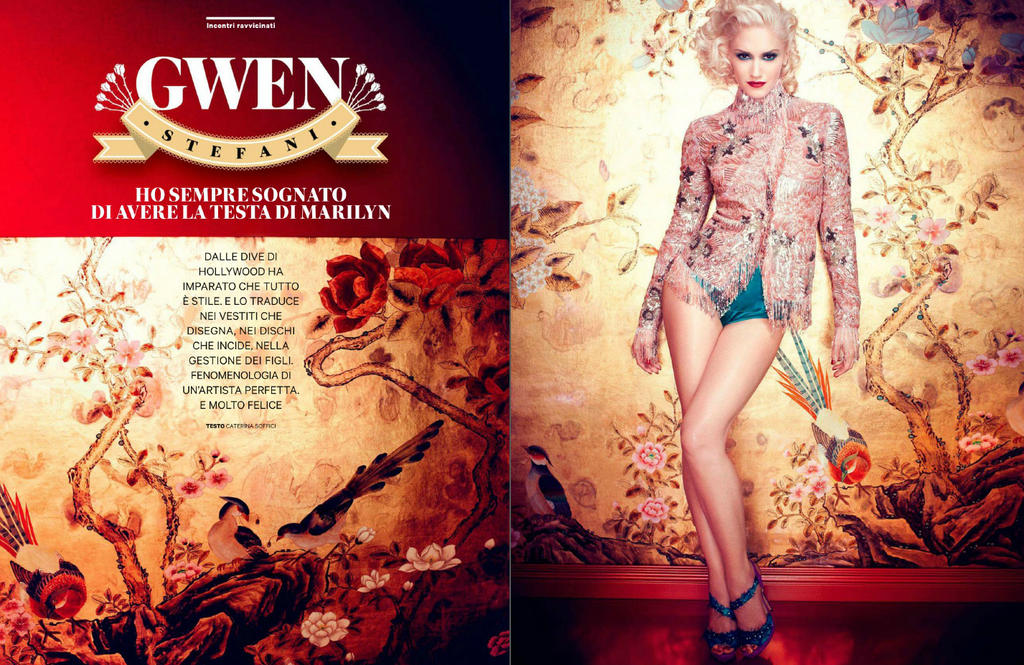 Thanks to justnodoubt for the scan,there is a 5-page Gwen spread in the December issue of Italy’s Amica Magazine;the photos are from Gwen’s November 2011 InStyle photoshoot.

UPDATE: Thanks again to justnodoubt for sharing the rest of the scans and thanks to Francesca for the translation of Gwen’s new interview. 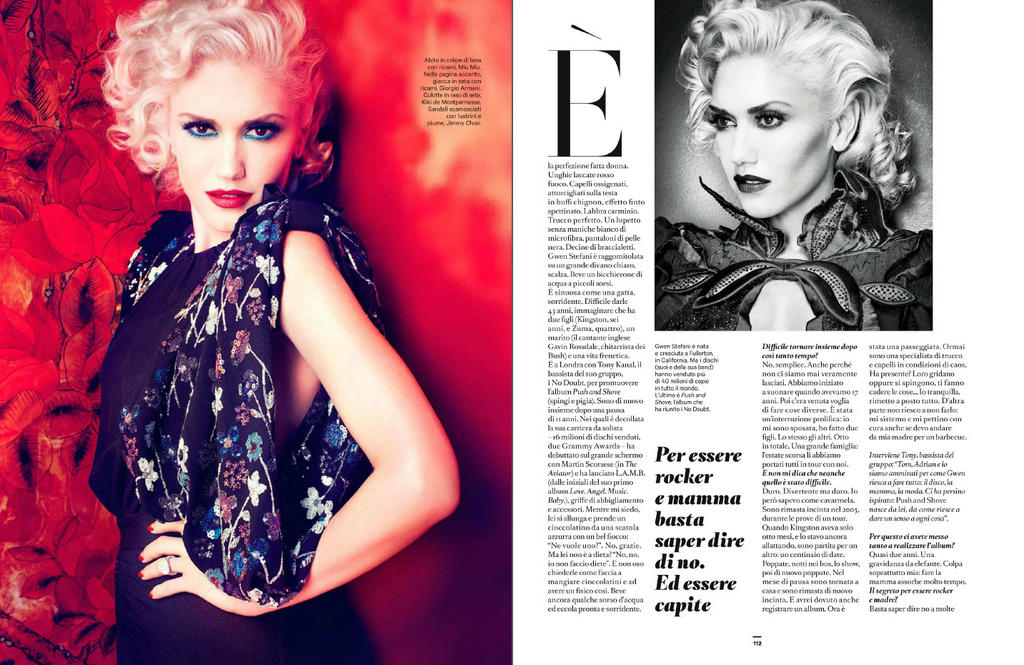 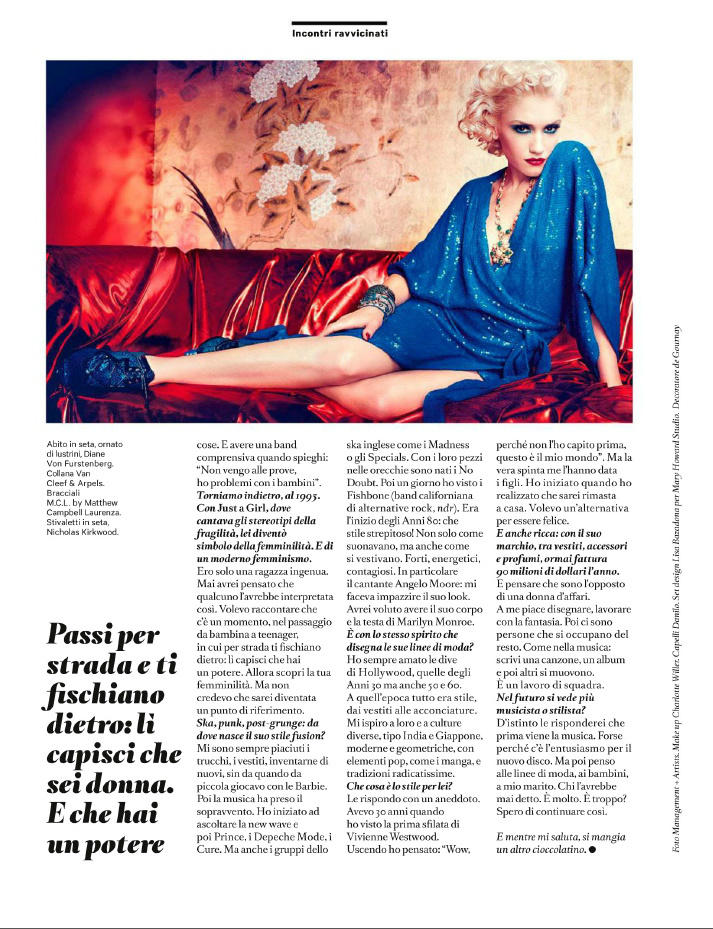 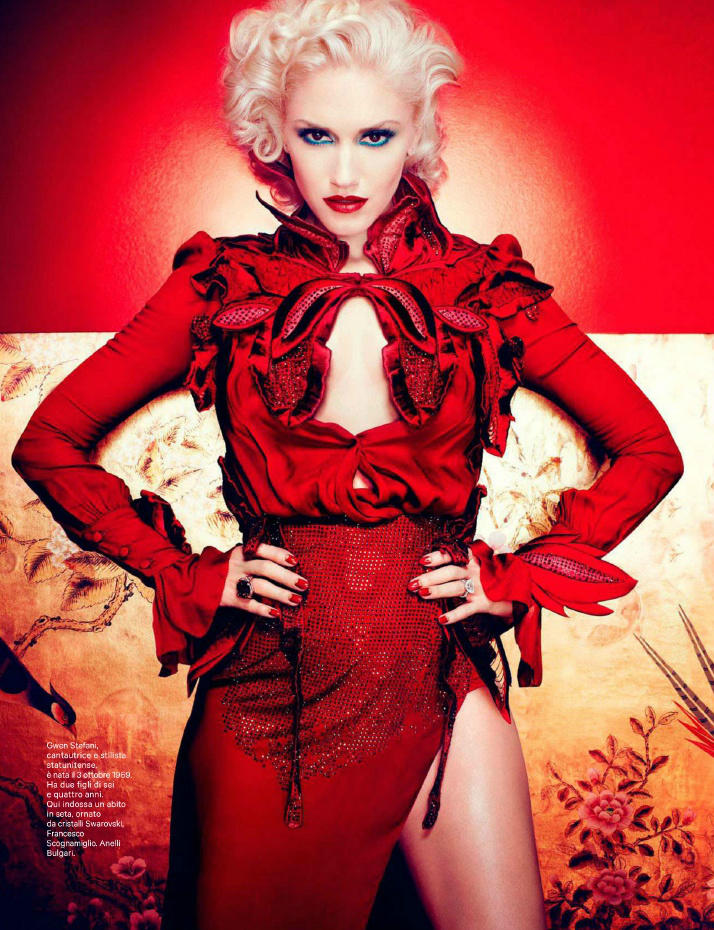 From the Hollywood Diva she learned theat style is everything. And she translated it into the dresses she designs. Into the songs she records, into her childreen education. Fenomenology of a perfect artist. And very happy.

She is perfection made woman. Red-fire lacquered nail. Bleached hair twisted in funy chignon, in a fake uncombed effect. Carmine lips. Perfect make up. White microfiber sleeveless turtle neck, black leather pants. Dozen bracelets. Gwen Stefani is curled up on a light couch, barefoot. She sips a big glass of water.She is sinuos like a smiling cat. It’s hard to say she is 43, two kids (Kingston 6 years, Zuma 4), a husband (british singer Gavin Rossdale, guitarist of Bush) and a frentic life. She is in London with Tony Kanal, the bassist of her band, No Doubt, to promote the new album Push and Shove. They are back together after a 11 years break. During which her solo carreer took off – 16 millions records sold, two Grammy Awards – she made a movie debut with Martin Scorsese (The Aviator) and she launched her fashion and accessories brand L.A.M.B (Love.Angel.Music.Baby). While I sit, she reaches a blue box with a nice ribbon and she takes a chocolate: “Do you want one?”. No thanks. Aren’t you on a diet? “No, no, I don’t do diets”. And I do not dare to ask how she is able to eat chocolate and have such an amazing body. She sips some more water and she is ready and smiling.

Is it hard to get back together after such a long time?

No, easy. Even though we never really got apart. We started playing when we were 17. Then we wanted to make different things. It was a very prductive break: I got married, had two kids. Same did the guys. Eight in total. A big family: last summer we took them in tour with us.

Hard. Funny but hard. I knew how to manage that. I got pregnant in 2005, during a tour rehearsals. When Kingston had only 8 months, and I was still breastfeeding him, I left for another tour: about a hundred dates. Nursing, nights in bus, the show, then again breastfeedig. In the break month i got back home and i got pregnant again. I would had also to record the new album. It wasn’t easy. Now I’m a make-up and hair expert in chaotic situations. You know what i mean? They scream, they push each other, make thing falling…I keep quiet, and i put everything back in order. I can’t don’t do that: I fix myself and I comb my hair even if I have to go to my mother for a barbecue.

Tony: “Tom, Adrian ad me we are admired for how she can make everything work: record, mom, and fashion. She inspired us: Push and Shove, comes from her, from how she can give sense to everything”.

That’s why it tooks so much to make the record?

Almost two years. An elephant pregnancy. It’s mainly my fault: it takes a lot of time to be a mum.

The secret of being a rockstar and a mother?

You need to say no to many things. And have a comprehensive band when you say “I can’t make it to rehearsals, kids problems”.

Let’s get back to1995. With Just a Girl when you sang the stereotypes of fragility, you became the symbol of femininity. And of a modern feminism.

I was just a naive girl. I would never thought that someone would interpret it that way. I wanted to tell that there’s a moment, in the passage between childhood and teenager, where they whistle at you in the street: that’s when you realize that you have a power. Then you discover your feminity. But I never thought I would become a reference point.

Ska, punk, post-grunge: were does this fusion style comes from?

I’ve always loved make up, dresses, invent new ones, since I was a little girl playing with Barbie. Then music took over. I started to listen to the new wave ant then Prince, The Depeche Mode, the Cure. But also the british ska band like Madness or The Specials. With their music in the ears No Doubt were born. Then one day I saw the Fishbone. It was the beginning of the 80’s: what a wonderful style! Not only how they played, but also the way they used to dress. Strong, energetic, contagious, Expecially the singer Angelo Moore: I was crazy for his look. I wanted to have his body and the head of Marilyn Monroe.

It’s with the same spirit that you design your fashion brand?

I’ve always loved the Hollywood divas, those of the 30’s, and the 50’s and 60’s. In that periods everything was style, from dresses to hairstyles. I’m inspired by them and by different cultures, like India and Japan, modern and geometric, with pop elements, like manga and ancient traditions.

What is style for you?

I answer with an anecdote. I was 30 years old when I saw my first Vivienne Wastwood fashion show. Exiting I thought : “Wow, why I didn’t get it earlier, this is my world”. But the real push was given by my kids. I started when I realized I was staying home. I wanted an alternative to be happy.

And also rich: with your brand, clothes, accessories and perfumes, she has a yearly turnover of 90 millions dollars.

I’m exactly the opposite of a business woman. I love design, work with fantasy.Then there are people who take care of the rest. Like in music: you write a song, a record, then people make it work. It’s a team work.

How do you see yourself in the future?Musician or designer?

Instinctively I would answer music comes first. Maybe It’s for the enthusiasm of the new record. Then I think about my fashion lines, the kids, and my husband. Who’d ever say that! It’s much. Is it too mush?

And while she waves goodbye she eats another chocolate.