Thanks so much to justnodoubt for the scan,check out a short new Tom interview featured in the December issue of Guitar Player Magazine! In the article,Tom shares his four rules of playing rhythm guitar-click on the scan to see it in full size. 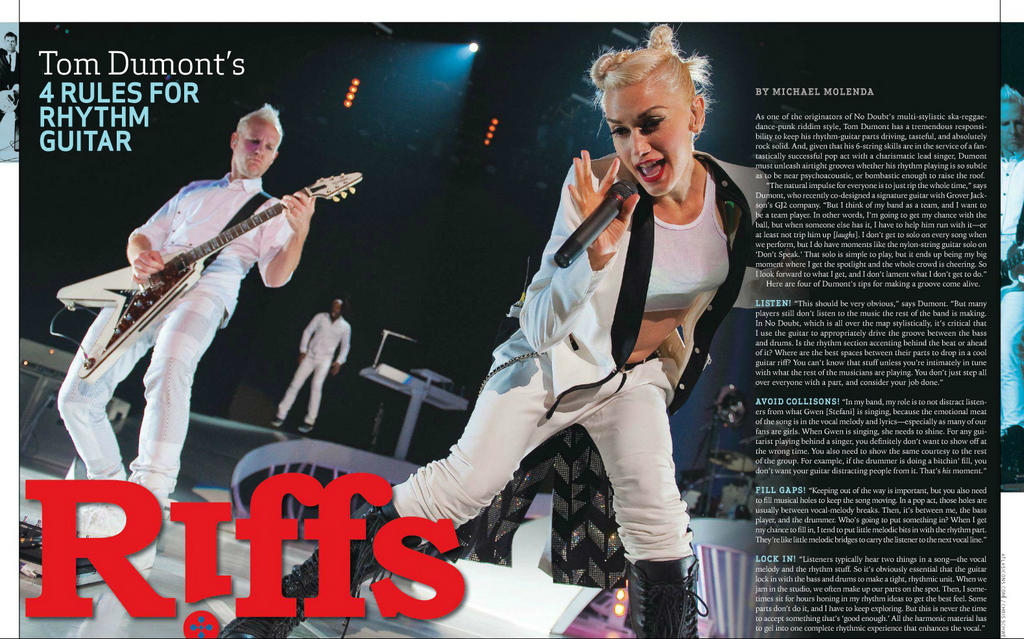 As one of the originators of No Doubt’s multi-stylistic ska-reggae-dance-punk riddim style,Tom Dumont has a tremendous responsibility to keep his rhythm guitar parts driving,tasteful and absolutely rock solid. And,given that his six-string skills are in the service of a fantastically successful pop act with a charismatic lead singer,Dumont must unleash airtight grooves whether his rhythm playing is so subtle as to be near psychoacoustic,or bombastic enough to raise the roof.
‘’The natural impulse for everyone is to just rip the whole time’’,says Dumont,who recently co-designed a signature guitar with Grover Jackson’s GJ2 company. ‘’But I think of my band as a team,and I want to be a team player. In other words,I’m going to get my chance with the ball,but when someone else has it,I have to help him run with it-or at least not trip him up [laughs]. I don’t get to solo on every song when we perform,but I do have moments,like the nylon-string guitar solo on ‘Don’t Speak’. That solo is simple to play,but it ends up being my big moment where I get the spotlight and the whole crowd is cheering. So I lok forward to what I get,and I don’t lament what I don’t get to do.’’

Here are four of Tom’s tips for making a great groove come alive:

LISTEN! ‘’This should be very obvious’’,says Tom. ‘’But many players still don’t listen to the music the rest of the band is making. In No Doubt,which is all the map stylistically,it’s critical that I use the guitar to appropriately drive the groove between the bass and drums. Is the rhythm section accenting behind the beat or ahead of it? Where are the best spaces between their parts to drop in a cool guitar riff? You can’t know that stuff unless you’re intimately in tune with what the rest of musicians are playing. You don’t just step all over everyone with a part,and consider your job done.’’

AVOID COLLISIONS! ‘’In my band,my role is to not distract listeners from what Gwen is singing,because the emotional meat of the song is the vocal melody and lyrics-especially as many of our fans are girls. When Gwen is singing,she needs to shine. For any guitarist playing behind a singer,you definitely don’t want to show off at the wrong time. You also need to show the same courtesy to the rest of the group. For example,if the drummer is doing a bitchin’ fill,you don’t want your guitar distracting people from it. That’s his moment.’’

FILL GAPS! ‘’Keeping out of the way is important,but you also need to fill musical holes to keep the song moving. In a pop act,those holes are usually between vocal-melody breaks. Then,it’s between me,the bass player,and the drummer. Who’s going to put something in? When I get my chance to fill in,I need to put little melodic bits in with the rhythm part. They’re like little melodic bridges to carry the listener to the next vocal line.’’

LOCK IN! ‘’Listeners typically hear two things in a song-the vocal melody and the rhythm stuff. So it’s obviously essential that the guitar lock in with the bass and the drums to make a tight,rhythmic unit. When we jam in the studio,we often make up our parts on the spot. Then,I sometimes sit for hours honing in on my rhythm ideas to get the best feel. Some parts don’t do it,and I have to keep exploring. But this is never the time to accept something that’s ‘good enough.’ All the harmonic material has to get into one complete rhythmic experience that enhances the vocal.’’