UPDATE 2: StyleBlazer has posted more quotes from Gwen about the inspiration for the Spring 2014 collection. In addition to the vintage military jumpsuit she happened across at a flea market,Gwen says that she also took inspiration from ”this amazing Jim Naughten photo of these Namibian boys from the Hereo Tribe who had made their own uniforms in blue and red.” Gwen goes on to say this about the collection: “The clothing is strong and feminine with a mixture of both glamorous and tomboyish elements. I love that, putting a twist on practical pieces.” We love it,too!!

Two very unlikely themes converged into one for L.A.M.B.’s Spring 2014 collection. “The starting off point for this collection was largely a vintage flea market jumpsuit that had amazing pocket details and zips everywhere,” said designer, Gwen Stefani who utilized zippers for spurts of interest. “The second inspiration I found was this amazing Jim Naughten photo of these Namibian boys from the Hereo Tribe who had made their own uniforms in blue and red.”

Distinct from her previous work, Spring 2014 shows a maturity and control that Stefani has grown in to. Merging her personal taste with trends, she’s created mass appeal with pieces catered toward every type of modern woman. Aside from cargo jumpers, the collection boasts airy dress, multiple prints, asymmetrical skirts and tailored cigarette slacks.

“The clothing is strong and feminine with a mixture of both glamorous and tomboyish elements. I love that, putting a twist on practical pieces.”

UPDATE: Style.com has now posted a glowing review of the collection with quotes from Gwen about the inspiration for Spring 2014.

Earlier this year, punk suddenly became the new black, making Gwen Stefani’s rebellious personal style relevant (not to mention commercially viable) all over again. That’s good news for her L.A.M.B. line, which aims to capture the singer’s inimitable fashion sense and attitude—or “Gwenitude,” as her design team calls it. The jumping-off point for the contemporary label’s Spring collection was a , which had amazing pocket details and zips everywhere. “It was incredible,” she said via e-mail. “I love finding that one thing that gets me excited when starting a new season.” Surely enough, a utilitarian all-in-one done in soft chambray was one of the highlights here, and its relaxed silhouette was echoed throughout on silk drop-crotch trousers and cargo track pants toughened up with hardware accents.

Elsewhere, a series of safety orange pieces including a cool biker jacket and architectural shorts cut from a spongy double crepe added a zesty pop of color. Overall, though, this was a subdued lineup, and Stefani admitted it was a bit of a departure. “It’s a quieter collection than in the past—somewhat streamlined.” An on-trend sheer maxi dress featuring a grunge floral print tapped into her new softer side.

YAY,thanks to Style.com for posting photos of the entire Spring 2014 L.A.M.B. collection!!! We are in love with all of the 24 looks! Congrats to Gwen and her L.A.M.B. team on yet another fierce,fabulous collection! 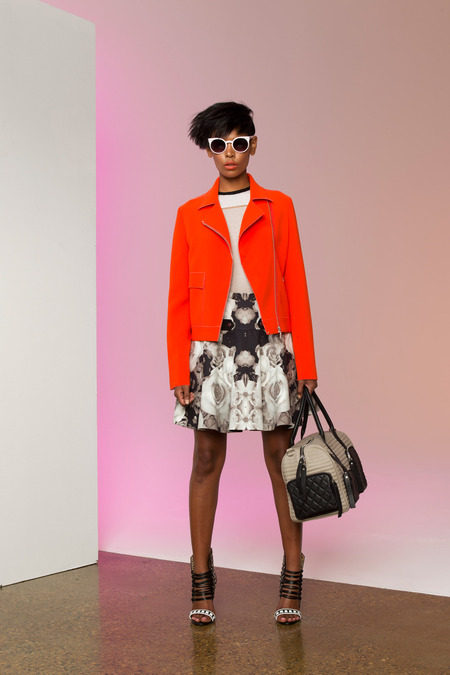 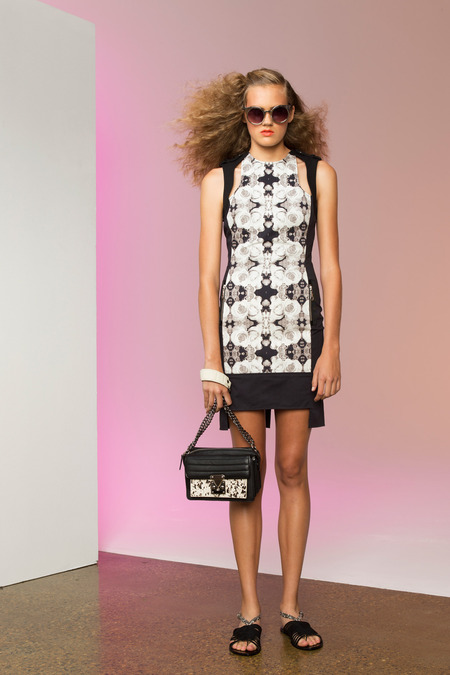 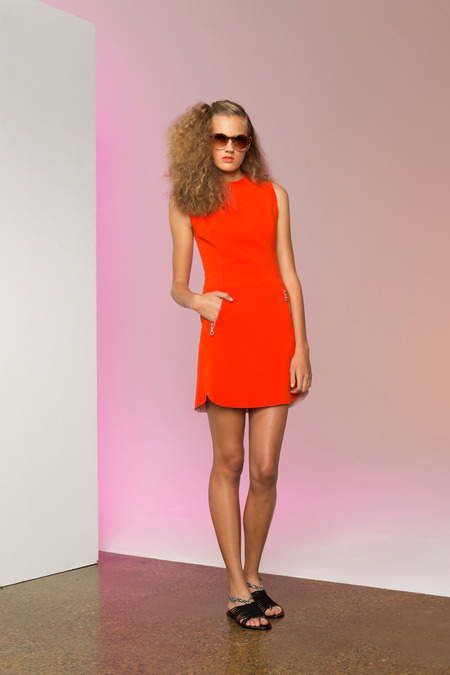 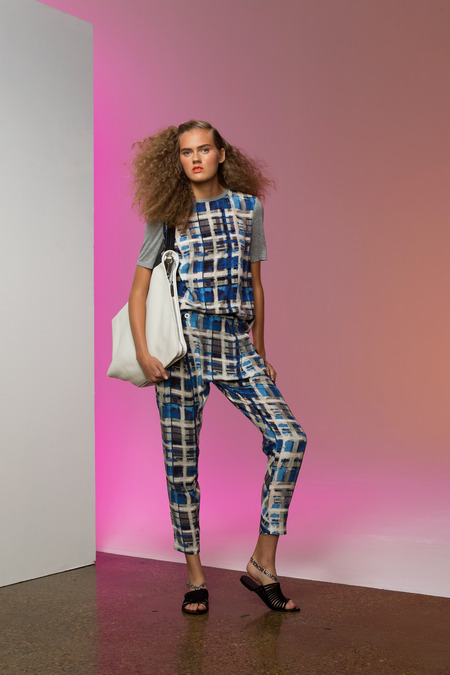 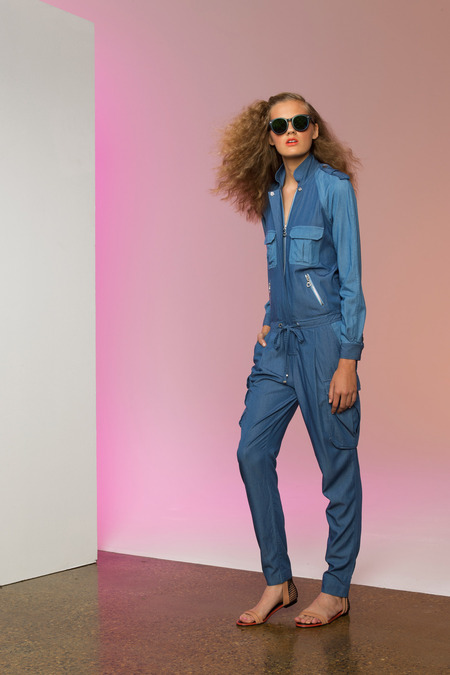 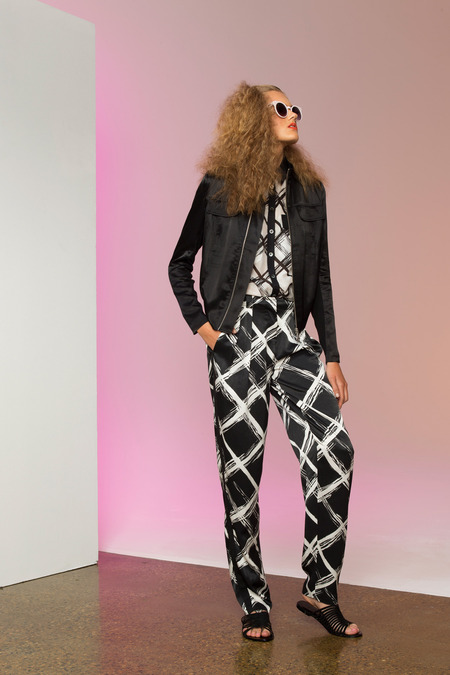 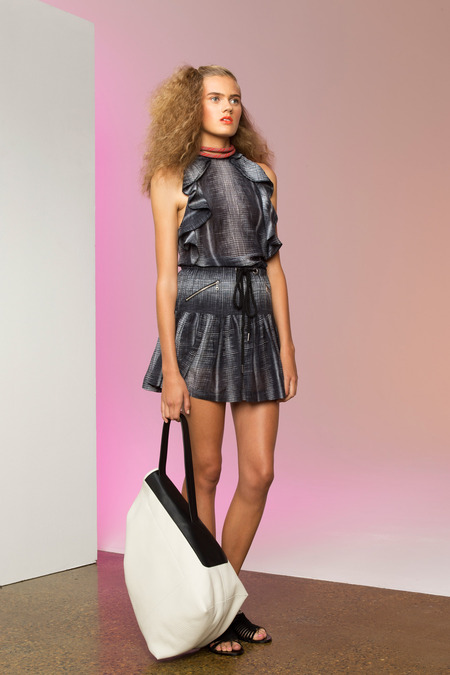 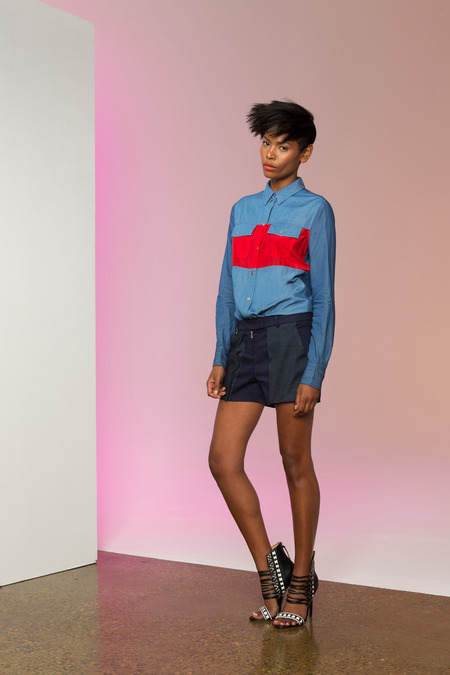