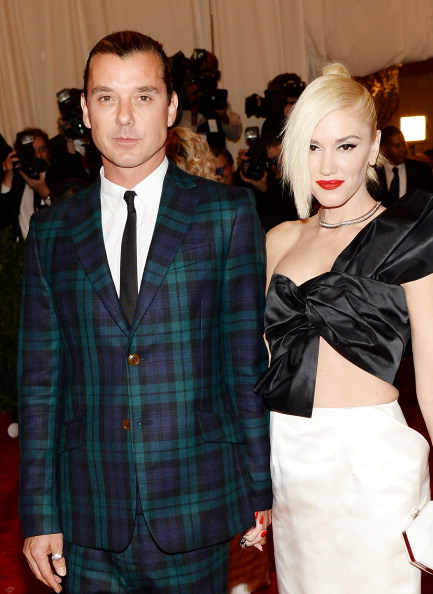 In a new interview with UK’s Metro Showbiz following his win at today’s Ivor Novello Awards in London (much congratulations to him!),Gavin talked about his marriage to Gwen,admitting that sometimes he feels they have no privacy but gushed that they have ”a great partnership and we have great kids and we really like each other”. He went on to say that although there are days when Gwen says she feels ”ropey”,he’s never seen that;he also said that while he and Gwen have no further plans to duet,their performance together of Bush’s song ”Glycerine” at last year’s KROQ Almost Acoustic Christmas was ”pretty special”.

The former Bush singer made a rare public appearance at The 58th Ivor Novello Awards in London to be honoured for his international success but opened up about the couple’s marriage in his wife’s absence.

‘She wanted to be here but she is in America,’ said the 47-year-old rocker.

Surviving constant rumours about their romance and the bombshell that 24-year-old model Daisy Lowe was his love child, Gav admitted keeping their woes under wraps has been tough.

His and Gwen’s secret to weathering the storms? ‘We just have a great partnership and we have great kids and we really like each other,’ he said.

And it seems a few little compliments about the mother of his two boys never does any harm after the No Doubt singer recently complained she struggles at times to look her best.

‘She has days where she says she feels ropey but I’ve never seen that,’ he said.

The slicked back star’s upbeat outlook on his marriage to Gwen came after she recently admitted it was a ‘miracle’ they had lasted hinting at ‘these wars that go on’.

‘My biggest accomplishment is my marriage so far. Because it’s hard, everyone knows it’s hard,’ said Mrs Rossdale.

There are fun times too for the couple, says Gavin who says he likes jamming with Gwen at his gigs but ruled out a duet.

‘We just played in Los Angeles and she came on stage for a song called Glycerine, which she sang with me and that was a pretty special night,’ he said. As for partying he says they ‘just choose the time when it’s fun’.

As for Gav he said he was ‘honoured and humbled and just shocked’ to be recognised for his song writing at the prestigious industry bash at London’s Grosvenor House in Park Lane.

Rossdale promised fans he won’t rest on his laurels and has 12 new songs on the way.

‘I’m really into it,’ he said of his new album. ‘It’s really exciting and powerful.’