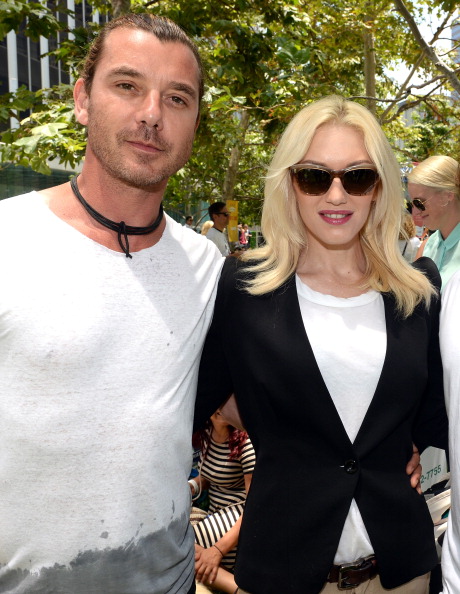 In an interview this morning with Ryan Seacrest to promote his new movie ”The Bling Ring”,Gavin sweetly complimented Gwen’s ability to ”make any day fun, especially kind of days like Father’s Day, Mother’s Day, Independence Day, anything that is a special day, that’s right up to her in the house.” Gavin also teased that he has no problem with Gwen’s signature red lipstick rubbing off on him. You can listen to the interview below.
Gavin Rossdale says Gwen Stefani is the queen of fun.

The Bush frontman, who has been married to the No Doubt singer for more than 10 years, is looking forward to seeing what she and their sons, Kingston, six, and Zuma, four, have planned to celebrate Father’s Day on Sunday (16.06.13) because she knows how to have a good time.

The 47-year-old rocker told Ryan Seacrest on his KIIS-FM show on Thursday (13.06.13): ”They’re still at the age where they tell me about the surprises. Like, ‘Don’t go in that room your surprise is in there’ … but I don’t know what to expect [this weekend] and Gwen is always really good at that stuff. She knows how to make any day fun, especially kind of days like Father’s Day, Mother’s Day, Independence Day, anything that is a special day, that’s right up to her in the house.”

The ‘Bling Ring’ star, who recently returned home to Los Angeles from tour, tries not to spoil his sons by bringing them home gifts.

He explained: ”I try not to in the sense because I don’t want them to get used to it. But of course I do, and as soon as I walk through the door that’s always the first question, so it’s nice to feel loved and missed, so I bring stuff.”

Gavin also revealed that he has no problem with his wife’s signature red lipstick.

He said: ”No, I don’t worry about that. You know there’s plenty of ways, soap and water is fine … it’s all worth it!