We have a treat for you guys. I got a chance to interview Tosha Jones, the winner of Adrian’s Push and Shove Drum Contest! We have uploaded pictures of the article as well as a transcribed version. Make sure to scroll to the bottom to check out cool videos and links to Tosha’s website and band Spare Parts for Broken Hearts. If you like what you hear they will be playing the Vans Warped Tour at the Fairplex in Pomona, California on Friday, June 21st.  Enjoy the article No Doubters <3 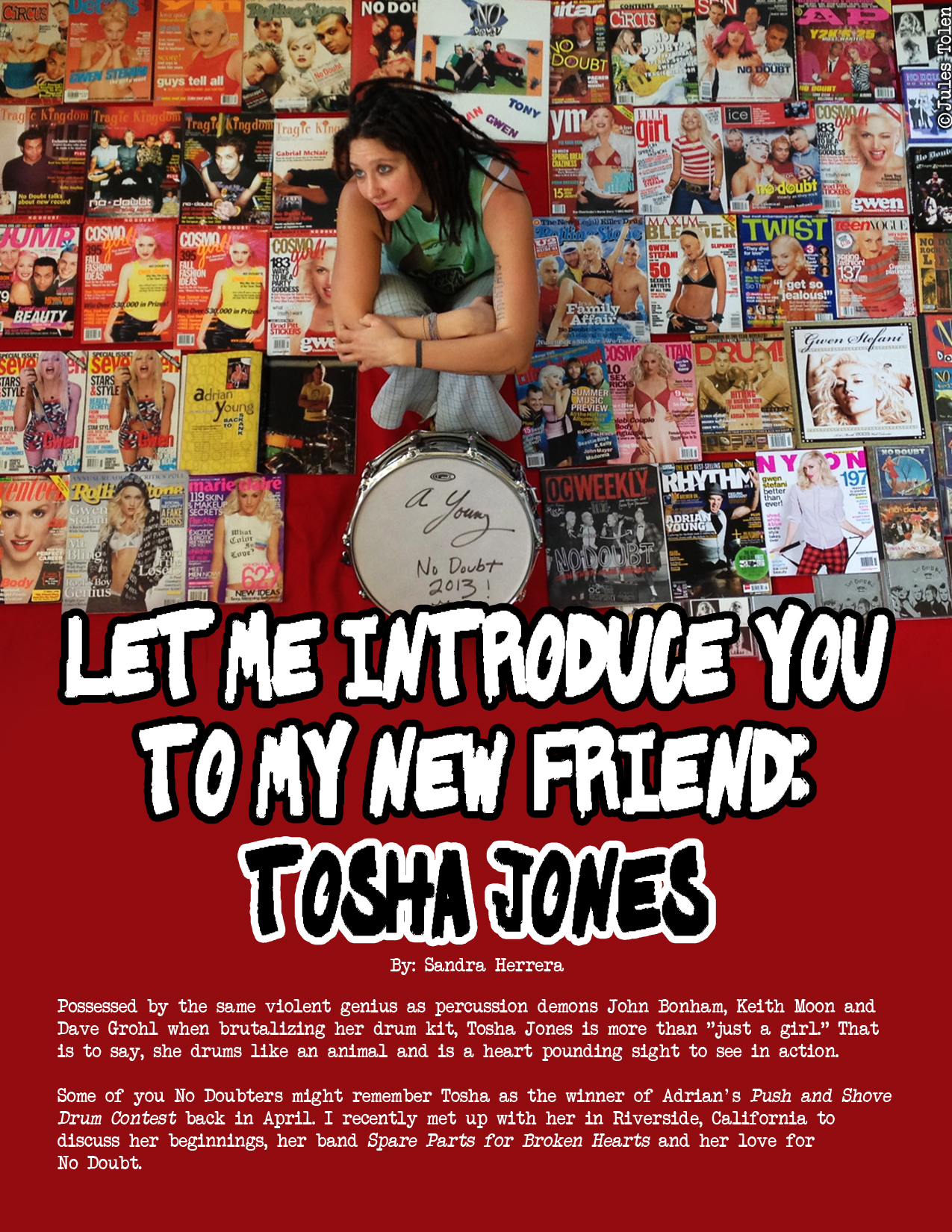 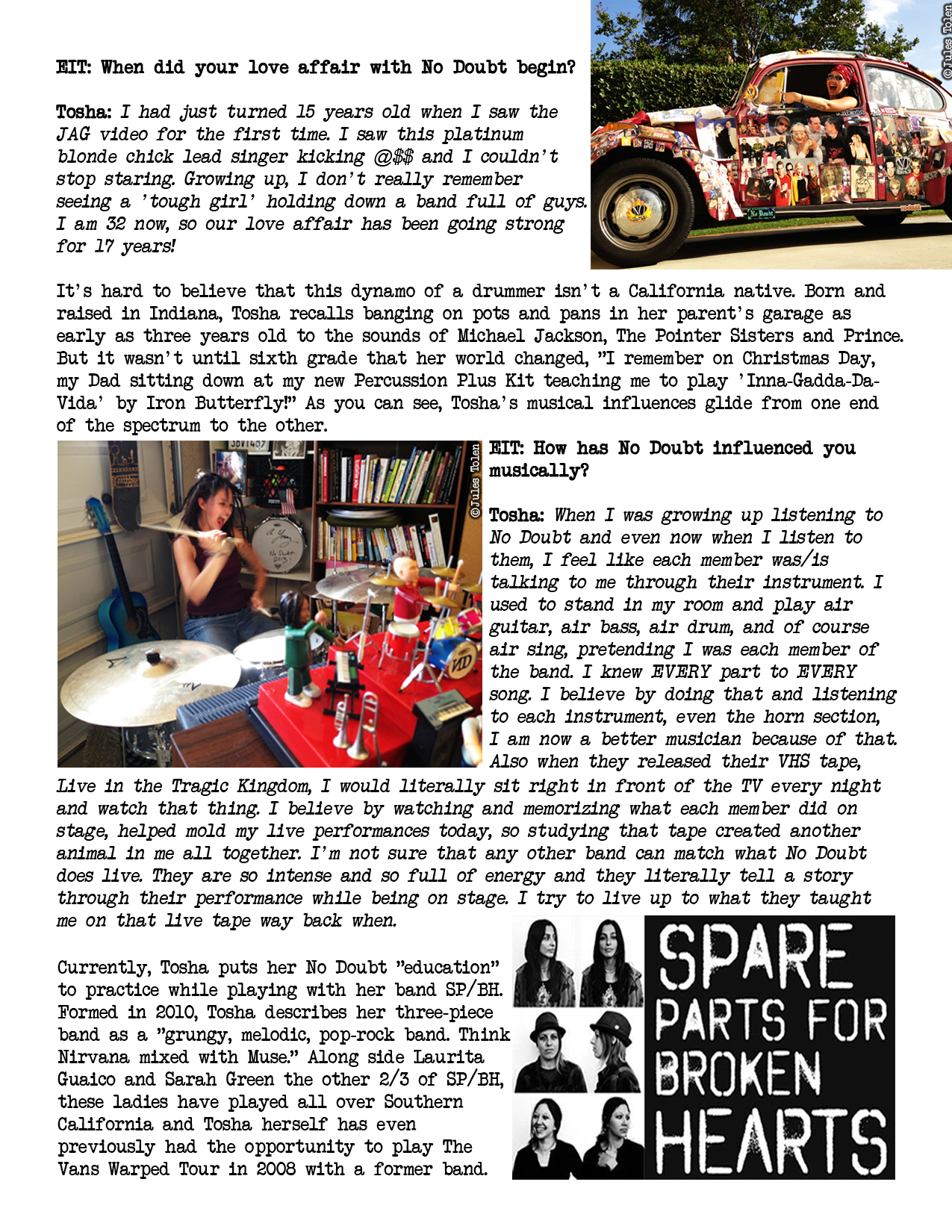 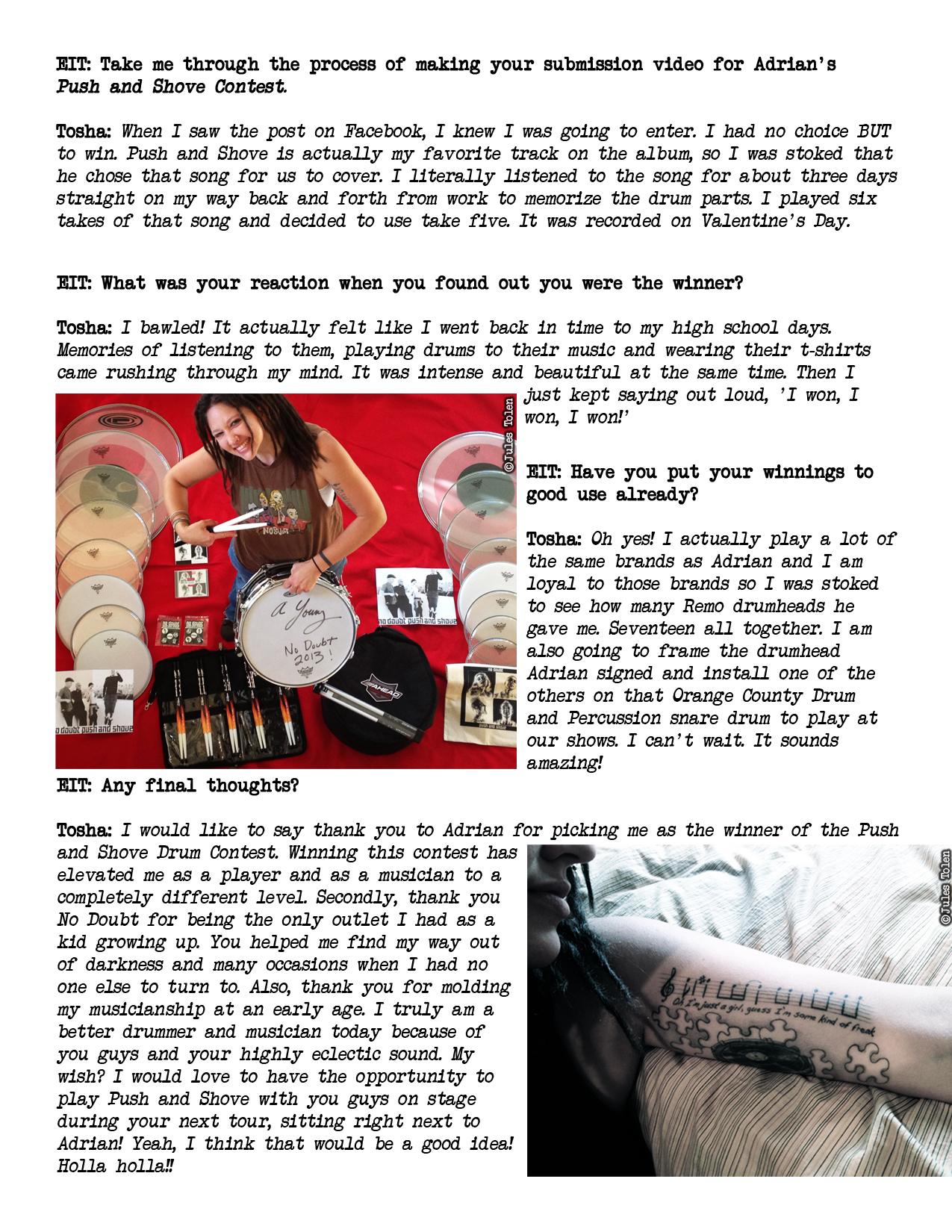 Let Me Introduce You To My New Friend: Tosha Jones

Possessed by the same violent genius as percussion demons John Bonham, Keith Moon and Dave Grohl when brutalizing her drum kit, Tosha Jones is more than “just a girl.” That is to say, she drums like an animal and is a heart-pounding sight to see in action.

Some of you No Doubters might remember Tosha as the winner of Adrian’s Push and Shove Drum Contest back in April. I recently met up with her in Riverside, California to discuss her beginnings, her band Spare Parts for Broken Hearts and her love for No Doubt.

EIT: When did your love affair with No Doubt begin?

Tosha: I had just turned 15 years old when I saw the JAG video for the first time. I saw this platinum blonde chick lead singer kicking @$$ and I couldn’t stop staring. Growing up, I don’t really remember seeing a ‘tough girl’ holding down a band full of guys. I am 32 now, so our love affair has been going strong for 17 years!

It’s hard to believe that this dynamo of a drummer isn’t a California native. Born and raised in Indiana, Tosha recalls banging on pots and pans in her parent’s garage as early as three years old to the sounds of Michael Jackson, The Pointer Sisters and Prince. But it wasn’t until sixth grade that her world changed, “I remember on Christmas Day, my Dad sitting down at my new Percussion Plus Kit teaching me to play ‘Inna-Gadda-Da-Vida’ by Iron Butterfly!” As you can see, Tosha’s musical influences glide from one end of the spectrum to the other.

EIT: How has No Doubt influenced you musically?

Tosha: When I was growing up listening to No Doubt and even now when I listen to them, I feel like each member was/is talking to me through their instrument. I used to stand in my room and play air guitar, air bass, air drum, and of course, air sing, pretending I was each member of the band. I knew EVERY part to EVERY song. I believe by doing that and listening to each instrument, even the horn section, I am now a better musician because of that. Also when they released their VHS tape, Live in the Tragic Kingdom, I would literally sit right in front of the TV every night and watch that thing. I believe by watching and memorizing what each member did on stage, helped mold my live performances today, so studying that tape created another animal in me all together. I’m not sure that any other band can match what No Doubt does live. They are so intense and so full of energy and they literally tell a story through their performance while being on stage. I try to live up to what they taught me on that live tape way back when.

Currently, Tosha puts her No Doubt “education” to practice while playing with her band SP/BH. Formed in 2010, Tosha describes her three-piece band as a “grungy, melodic, pop-rock band. Think Nirvana mixed with Muse.” Along side Laurita Guaico and Sarah Green the other 2/3 of SP/BH, these ladies have played all over Southern California, and Tosha herself has even previously had the opportunity to play The Vans Warped Tour back in 2008 with a former band.

EIT: Take me through the process of making your submission video for Adrian’s Push and Shove Drum contest.

Tosha: When I saw the post of Facebook, I knew I was going to enter. I had no choice BUT to win. Push and Shove is actually my favorite track on the album, so I was stoked that he chose that song for us to cover. I literally listened to the song for about three days straight on my way back and forth from work to memorize the drum parts. I played six takes of that song and decided to use take five. It was recorded on Valentine’s Day.

EIT: What was your reaction when you found out you were the winner?

Tosha: I bawled! It actually felt like I went back in time to my high school days. Memories of listening to them, playing drums to their music and wearing their t-shirts came rushing through my mind. It was intense and beautiful at the same time. Then I just kept saying out loud, ‘I won, I won, I won!’

EIT: Have you put your winnings to good use already?

Tosha: Oh yes! I actually play a lot of the same brands as Adrian and I am loyal to those brands so I was stoked to see how many Remo drumheads he gave me. Seventeen all together. I am also going to frame the drumhead Adrian signed and install one of the other drumheads on that Orange County Drum and Percussion snare drum to play at our shows. I can’t wait. It sounds amazing!

Tosha: I would like to say thank you to Adrian for picking me as the winner of the Push and Shove Drum Contest. Winning this contest has elevated me as a player and as a musician to a completely different level. Secondly, thank you No Doubt for being the only outlet I had as a kid growing up. You helped me find my way out of darkness and many occasions when I had no one else to turn to. Also, thank you for molding my musicianship at an early age. I truly am a better drummer and musician today because of you guys and your highly eclectic sound. My wish? I would love to have the opportunity to play Push and Shove with you guys on stage during your next tour, sitting right next to Adrian! Yeah, I think that would be a good idea! Holla holla!!

To read more about Tosha visit her website at www.toshajones.com or at  www.sparepartsforbrokenhearts.com

You can also check out Tosha’s winning drum video