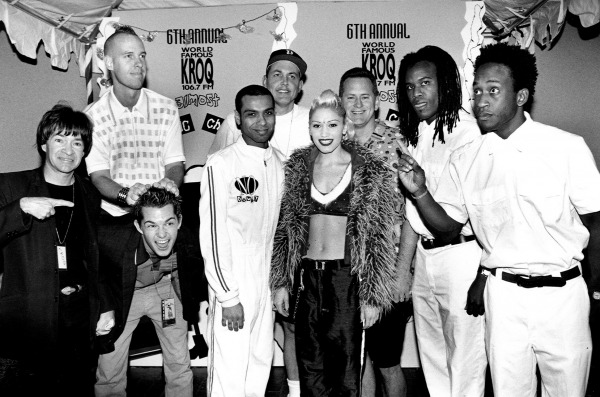 Salt Lake City,Utah-based TV and radio station KSL has included No Doubt in its compilation of the best alt rock bands of the 1990s. It’s cool how they laud ND for launching a ska revival in the 90s and mention how the band’s songwriting, musicianship and creativity have led them to still be relevant today. You can also vote for No Doubt on the KSL site for Best Band of the 90s.

For most GenXers, the music of the 1990s hold a special place in their flannel covered hearts. Not only did the music define their experiences during that decade, the 1990s gave birth to a new genre of music called alternative rock.

It was music that couldn’t be labeled pop or rock; it was different enough to not be either. Radio stations didn’t know what to call the new sounds nor did record stores, which led to the label of “alternative rock.”

Listed below are just five out of many amazing alternative rock bands that began in and rocked the 1990s. This is not an all-inclusive list, but just a small selection of some of the music and pop culture’s biggest heavy hitters that changed society.

If there were space for a Top 10 list, these bands also would be included: Sublime, Dave Matthews Band, Garbage, Bush and The Cranberries.

From Sunny Anaheim, Calif., came the ska-soaked rock of No Doubt. Its first release in 1992, the self-titled debut, spun wheels trying to compete with the grunge revolution.

The next release “The Beacon Street Collection”, a series of outtakes from the last sessions, faired better. Yet, it was “Tragic Kingdom” that helped spur a ska revival in 1995.

By 1995, the grunge scene was fading, after the Cobain’s death. No Dobut’s “Tragic Kingdom,” produced by Matthew Wilder of “Nothing Going to Break Your Stride” fame, showcased bouncy, catchy blend of third-wave ska, punk, rock and pop into a perfect punch to take over the airwaves of the world.

The band helped bring mainstream attention to other ska bands like Save Ferris, and Buck O’ Nine.

At the 1997 Grammy Awards, No Doubt were nominated for both Best New Artist and Best Rock Album. The album has sold over 20 million copies worldwide and is one of the best selling albums in history and was certified diamond by the Recording Industry Association of America in the United States and Canada by February 1999.

With a dynamic line up featuring Gwen Stefani, the band’s relationships were also front and center, mostly notably with the former relationship between Stefani and Tony Kanal.

The band continued to have commercial and critical success into the early 2000s with subsequent hit singles, albums and solo projects. While the mainstream interest in the ska movement faded, No Doubt’s songwriting, musicianship and creativity help it stay fresh and stay relevant.