We posted earlier that No Doubt was on Kevin and Bean this morning. Check out the podcast: 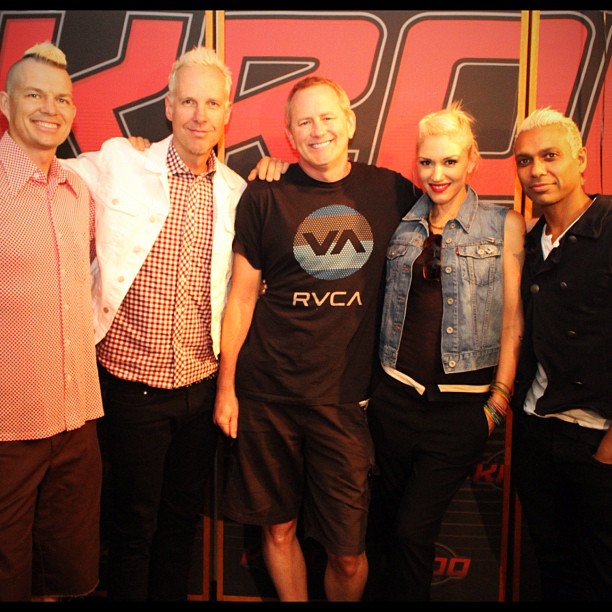 Here is the article: http://kroq.cbslocal.com/2012/09/04/no-doubt-bake-cookies-talk-with-kevin-bean-about-new-album-taking-their-kids-to-the-pool/#.UEaS9yiXAfg.twitter

In the beginning years of No Doubt’s roller-coaster 26-year spanning career, there were both tragic moments with the “big fish in a small pond” kingdom of the Anaheim, California music scene and exciting ones–ones that make lead singer Gwen Stefani really appreciate the struggles of asking her father for five bucks to rent a microphone for rehearsal and scraping up the necessary cash in order to make a demo.

“It was a lot of fun back in those days. The Beacon St. House,” said Stefani. Those who grew up in Southern California around that time remember the legacy of No Doubt. They were that Orange County band with the “awesome, hot” lead singer that ska and punk-loving teenagers would drive hours to see rock out in some stranger’s backyard. Those were the days that No Doubt were calling into KROQ requesting their hit single “Just A Girl” and bringing in chocolate chip cookies for their first interview on the Kevin and Bean Show.

What might have seemed as a gesture of youthful enthusiasm and perhaps music industry naivete was actually a sincere representation of what No Doubt represents as a band. While they may have spent their early years “pushing” and “shoving” their way to recognition, No Doubt has stuck together through band drama, achieved commercial success, and are still baking cookies for their Kevin and Bean interview.

Except these days, as one of the band members joked, when someone says they are “dropping the kids off at the pool,” it means something completely different from what it used to be. The band, who is planning their upcoming tour around the school schedules of their “traveling circus” of nine children amongst them, actually means that they are “dropping their kids off at the pool so that they can go swimming.”

Stefani said the songwriting process for Push and Shove was a “fun process,” but could be torturous because of the band’s varied schedules and personal commitments. In Stefani’s case, she was pregnant with her second child, Zuma, right at the beginning of writing Push and Shove and it was frustrating when the band would go to the studio and “would just sit there and nothing would be happening.”

“It’s just really weird because you never know,” explained Stefani. “It’s such a magical thing when it happens and the whole thing is knowing when something’s good or not and when you don’t have that ability that’s when you feel like hopeless.”

But this hopelessness lead the band to schedule on a whim what Stefani described as her “favorite tour” she’s ever been on. No Doubt is most comfortable onstage because as Stefani says, “It’s exciting; it’s like you could totally mess up.” Through the “teary” excitement of sharing songs with their fans and their children, No Doubt was able to negotiate enough time to get Push and Shove done.

Instead of creating thirty-something songs and picking the best from the creative mass, No Doubt utilized their scarce time in the studio–after the chatting and eating and “getting into the vibe” of course—to put all their energy into songs just meant for the album, which they all agreed should be “addictive” and “catchy.”

“We were really focused. I was coming off of like being up all night with the kids and then doing my thing in the day and then getting in the studio around four and then doing what I just talked about, you know, wasting time,” explained Stefani. “You know, when we would have something that we liked, we would just focus on it. Let’s cut to the chase; there’s no time for anything but greatness, so… we all had the same ideas of what kind of record we want to make which was just like a really addictive record…We didn’t know it was going to be so upbeat; we didn’t know what it would end up sounding like.”

What No Doubt did know is that when they were collaborating with Major Lazer for the title track for Push and Shove it was “sick.” The melodic juxtaposition of the song was both something that they would have done when they were younger when they would play “ska or a faster verse and then cut into a really rock, open half-tempo chorus” and something child-approved. Adrian Young’s ten-year-old son apparently chastised his father with a “no, duh” moment when Young told his son that the song was going to be played on the radio.

“We thought was an incredible track and then we wrote a chorus to it and it was one of those songs where it was like, ‘This is going to be the place on the record where we’re not going to have any rules,” said Stefani. “We’re just going to do whatever feels good and not try to be commercial, not try to be anything.’ Just be wild.”

After wilding out with new music in the studio and having the Secret Service survey the safety of Stefani’s house for a party with First Lady Michelle Obama, No Doubt is happy to have their own secrets i.e. their new music out for their fans to hear.

“We also just want to enjoy this moment of sharing the music after kind of hoarding it all this time,” said Stefani. “No one’s heard the music. We had to be so secretive about it and to be able to finally have people hear it—it’s the greatest feeling.”

This bond with their fans might be one of the major mitigating factors as to why the band has been able to survive together for so long. Another, as Tony Kanal eloquently explains, is that No Doubt’s ups-and-downs, no matter how dramatic, are what has made them truly appreciate each other.

“There’s three other people in my life that’ve had the same experiences that I’ve had and we’ve gone from being a band that played in a garage together to being a band that traveled the world together to now being a band that’s raising our kids together and I think we’ve experienced everything in between and we’ve gone through a lot of crazy stuff together,” explains Kanal. “You know, break-ups and a very important band member leaving and struggles with the record company and so many things and I think that we’ve gone through that stuff and it’s only made us stronger and we really appreciate the moment that we’re in right now.”

“As Gwen said, we’re trying to appreciate the moment. Yes, we’re going to tour; yes, we’re going to do this-and-that but right now it’s all about, ‘OK. We finished this record. Let’s enjoy this moment.’ I think we’re really fortunate. We don’t take it for granted.”