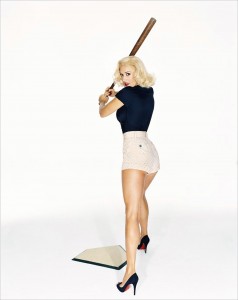 Gwen’s quote in the November issue of InStyle about bleaching her platinum blonde hair as often as Marilyn Monroe did hers is featured in a new Billboard article about Marilyn fever sweeping through music,movies and fashion this fall. Of course,Gwen has expressed her longtime love and admiration for Marilyn in the past,even paying tribute to some of Marilyn’s classic photoshoots with her own 2005 Allure shoot,including the photo above.

Marilyn Monroe is the hottest fall trend. With Lady Gaga’s “Marilyn moment” in front a former president to the film “My Week With Marilyn” staring Michelle Williams dropping next month, the Monroe craze continues to flood the fashion, movie and music industries.

Everyone seems to be channeling the world’s most visually iconic sex symbol, namely Wiliams as Marilyn in Vogue and Rihanna sporting the blond bombshell look in her British Vogue cover. Katy Perry recently even lost her pink locks and was spotted as a sexy blonde at the LAX airport.

The most highly visible homage came recently with Gaga’s serenading of ex-president Bill Clinton during a concert celebrating the 10th anniversary of his foundation on Saturday (Oct. 15), changing the words of her hit “Bad Romance” to “Bill Romance.”

“My first real Marilyn moment. I always wanted to have one, and I was hoping that it didn’t involve pills and a strand of pearls,” Gaga said after the gala.

Most recently Gwen Stefani sought inspiration from the blonde bombshell in her shoot for Instyle magazine. Wearing a Marchesa dress with Lorraine Schwartz bangles, the singer’s glamorous look is a nod to the platinum blonde beauty from the past. Gwen also revealed some similarities she shares with the “Some Like It Hot” icon inside the mag.

“My hair color is L’Oréal, but I won’t reveal the number. And I do my roots as often as Marilyn Monroe did hers. I’m serious. I found out,” she said in her interview. Not revealing the actual magic number, I assume it is safe to say that she touches up more then often.

Who will be next to have a Marilyn moment? How will you wear Marilyn this fall?