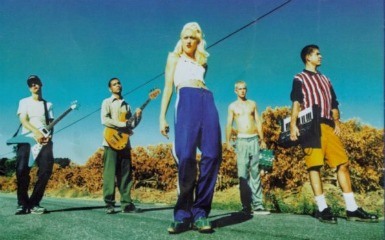 Thanks to Hannah for the heads up,KROQ.com has put together a cool feature in which KROQ staffers discuss their first favorite albums,and one staffer named Caitlyn recalls that for her,it was No Doubt’s Tragic Kingdom album. It’s awesome how she says that it remains one of her favorite albums to this day. What was the first No Doubt album you bought?

We all remember our first time. Who it was with, that nervous feeling of not knowing what to expect, as well as the excitement in taking a big step in your life with someone special. Oh yeah.. you know what I’m talking about… your first favorite album of course! Everyone’s got one.

I’ll never forget the day that a kid in my class had me listen to Tragic Kingdom by No Doubt. After school, I immediately went to the local record store and bought it. Then I went up to my room, put it in my boom box, took out the liner notes, and listened to it from beginning to end. From that moment, Gwen Stefani became one of my idols. I loved the band’s ska sound, and it remains one of my favorite albums today.