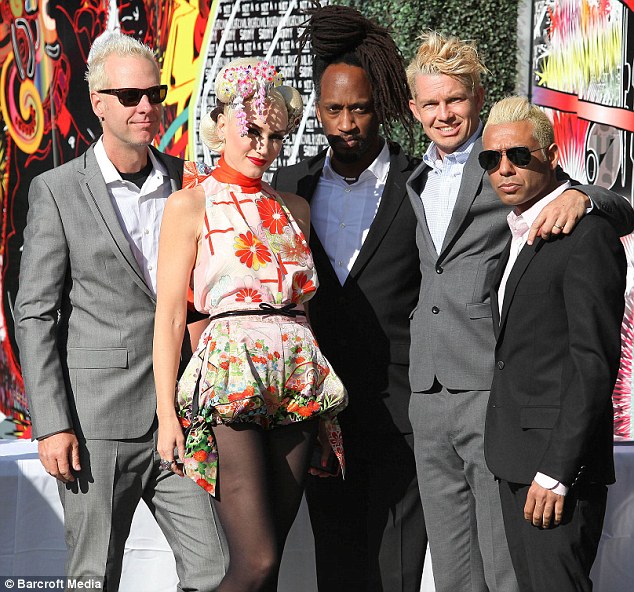 From The Daily Mail:

Gwen Stefani leant her star power to a charity auction today as she was joined by her No Doubt bandmates.
The 41-year-old star dressed in Japanese-style clothes in homage to those who lost their lives in the recent tsunami disaster.
Gwen was hosting a live auction where she was selling off items from her L.A.M.B and Harajuku lines at the Royal-T venue in Culver City, Los Angeles.

The auction featured vintage L.A.M.B. outfits from Gwen’s closet and limited edition Harajuku items signed by Gwen, with all the proceeds going to the Japan Relief.

Mother of two Gwen, who is married to Gavin Rossdale, was supported by her No Doubt bandmates Tony Kanal, Tom Dumont, Stephen Bradley, and Adrian Young.
In a recent interview Stefani said she has no plans to carry on with her solo music career and instead will focus on producing new material with No Doubt.
Referring to her solo career, which saw her release the album Sweet Escape, she told Entertainment Weekly: ‘That was a moment in time.’
She looked incredible in her floral pink Japanese playsuit with her hair styled in an ornate buns complete with flowers woven into her locks.

The singer-turned fashion designer recently had a ‘horrific’ night when their son Zuma was hospitalised after a fall.

The two-year-old reportedly broke his arm after taking a tumble from a countertop in their home on Thursday, and Rossdale said it was a heartbreaking night for everyone.

‘It was one of the worst nights of our lives,’ he said to People magazine.

‘It was one of those freak events – he fell. A freak accident.

‘He’s fine now. It’s almost worse for us [as parents] The kids are never alone and you turn your back – it takes a split second.’