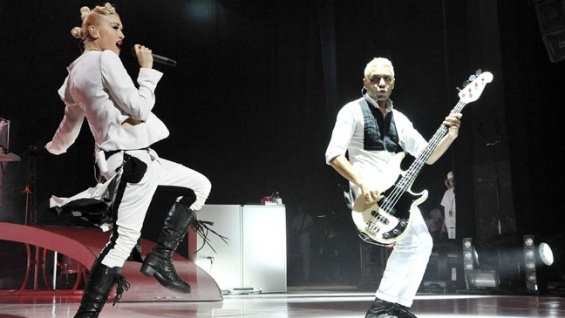 Wow,this is awesome news! The Hollywood Reporter is reporting that Gwen and Tony will be mentoring the Top 8 contestants on American Idol in the episode airing next Wednesday,April 4,on FOX at 8PM EST!! According to the article,Gwen and Tony spent five hours with the finalists today at Interscope’s Santa Monica recording studio in preparation for the show,whose theme next week will be 80s music. Gwen of course was a mentor to the contestants back in 2007 and was a fashion consultant for the female contestants last year;both No Doubt and Gwen have also performed on the show in the past. (Interscope chairman Jimmy Iovine is also a perma-mentor on the show.) Gwen and Tony are perfect mentors-the American Idol contestants are so lucky-we can’t wait to see them on the show next week!!!!

Half of No Doubt will appear on American Idol’s next week as singer Gwen Stefani and bassist Tony Kanal will mentor the remaining finalists, The theme: 80s night, which is a perfect fit for the Orange County-bred band, who were not only teenagers during the decade, but had a Top 10 single in 2003 with a cover of Talk Talk’s 1985 hit, “It’s My Life.”

No Doubt is also signed to Interscope, the label headed by Idol perma-mentor Jimmy Iovine. Stefani has appeared on Idol previously, perhaps most memorably styling the season 10 contestants last year in her own L.A.M.B. line.

The band members spent five hours with the season 11 finalists on Friday. As always, sessions took place at Interscope Records’ Santa Monica recording studio complex.
Tune in to Fox on Wednesday to see how the Top 8 fare.

UPDATE: American Idol producer Nigel Lythgoe tweeted this photo of himself and Gwen on the set yesterday-Gwen looks stunning,we can’t wait to see her and Tony on the show next Wednesday!

1 thought on “Gwen and Tony Will Be Mentors on American Idol Next Week!!”