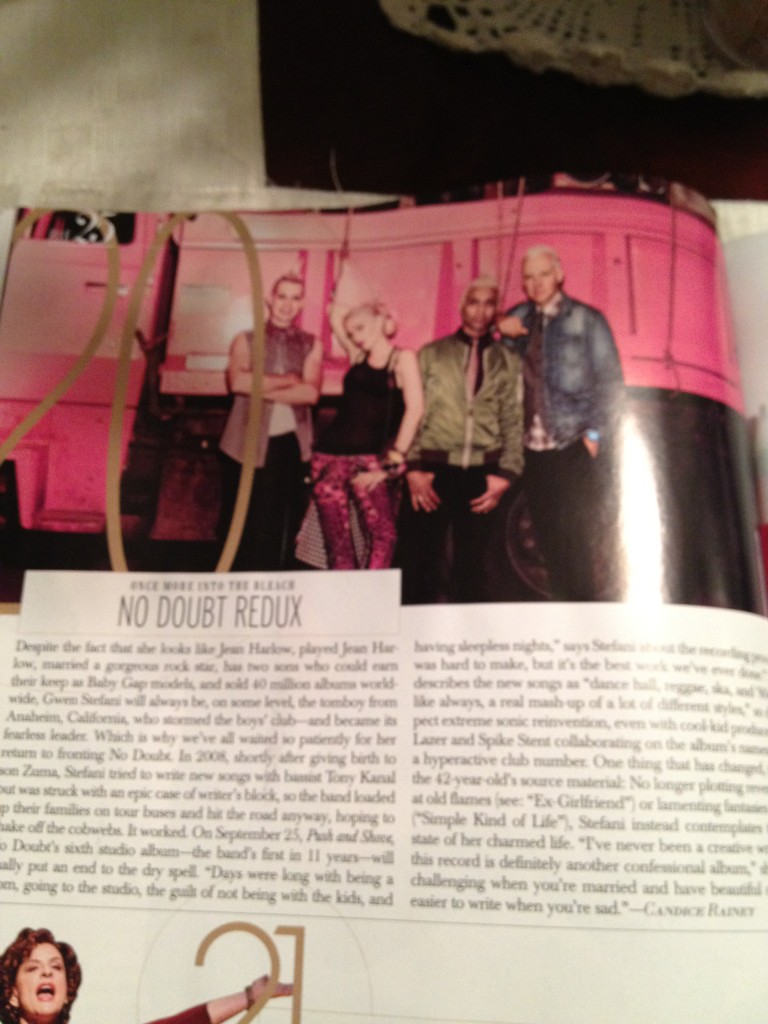 Thanks to Candice for sharing with us her scan of a small article with quotes from Gwen (and a previously-unseen group photo from the ”Settle Down” video set) featured in the September issue of Elle Magazine. Gwen talks again about the struggle of balancing family with the recording process and confirms that the new music is ”definitely another confessional album”. We transcribed the article below.

Once More Into The Bleach
No Doubt Redux

Despite the fact that she looks like Jean Harlow,played Jean Harlow,married a gorgeous rock star,has two sons who could earn their keep as Baby Gap models,and sold 40 million album worldwide,Gwen Stefani will always be,on some level,the tomboy from Anaheim,California, who stormed the boys’ club — and became its fearless leader. Which is why we’ve all waited so patiently for her return to fronting No Doubt. In 2008,shortly after giving birth to son Zuma,Stefani tried to write new songs with bassist Tony Kanal but was stuck with writer’s block, so the band loaded up their families on tour buses and hit the road anyway,hoping to shake off the cobwebs. It worked. On September 25,Push and Shove,No Doubt’s sixth studio album — the band’s first in 11 years — will finally put an end to the dry spell.

“Days were long with being a mom,going to the studio,the guilt of not being with the kids,and having sleepless nights,” says Stefani about the recording process. “It was hard to make,but it’s the best work we’ve done.” Stefani describes the new songs as “dancehall,reggae,ska and 80s-pop — like always,a real mash-up of a lot of different styles,” so don’t expect extreme sonic reinvention,even with cool-kid producers Major Lazer and Spike Stent collaborating on the album’s namesake tune,a hyperactive club number.

One thing that has changed,though,is the 42-year-old’s source material: No longer plotting revenge aimed at old flames (see: “Ex-Girlfriend”) or lamenting fantasies unfulfilled (“Simple Kind of Life”),Stefani instead contemplates the curent state of her charmed life. “I’ve never been a creative writer,so yes,this record is definitely another confessional album,” she says. “It’s challenging when you’re married and have beautiful children. It’s easier to write when you’re sad.” -Candice Rainey