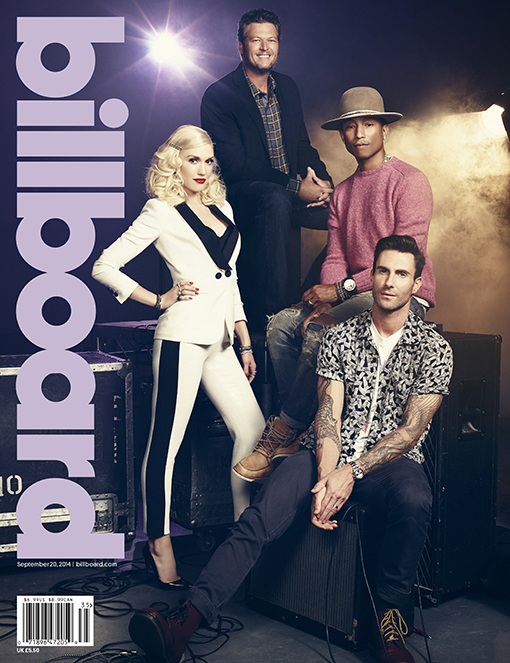 Gwen and fellow Voice coaches will be on the cover of the upcoming issue of the Billboard Magazine, out on September 12. She looks stunning as always! Billboard shared a preview of the interview with the coaches:

The four superstar coaches from The Voice will grace the cover of Billboard ahead the singing competition show’s upcoming season seven, which premieres Sept. 22 on NBC.

New coaches Gwen Stefani and Pharrell Williams will join the new season alongside Voice veterans Adam Levine and Blake Shelton. Here’s a sneak peak at what the coaches had to say about the popular series, among other things, in Billboard’s upcoming cover story.

Blake Shelton has a few words for TV competition show naysayers: “Miranda Lambert was a contestant on Nashville Star; that’s how she got her record deal. So anybody who calls out people for being on these shows can kiss the asses of some of the most important artists that we’ve seen in all of music, as far as I’m concerned.”

Adam Levine offers a look into his personal musical listening habits: “I live in the past as far as a lot of music that I love. I’m very rooted in the classics. There are 50 records I listen to over and over again, most of them coming before 1985.”

Gwen Stefani on why The Voice is a useful platform for artists: “If you’re Tom Petty, and you want to play your song for the people of America, you would come and you would perform it on The Voice. You don’t play it on MTV. Maybe on the Grammys. But this is music right now. This is where we’re at.”

Pharrell Williams says artists need a good background story: “Ultimately, someone who sings perfectly, with no story, ends up singing background. Someone that really tells their story ends up being the lead singer. You look at The Jackson 5: It’s not that none of the other guys [could] sing. It’s just that you wanted to know what that little boy was thinking. It’s like, ‘That kid is 6 years old, what does he know about that? You know he didn’t write that, but what’s his story?'”

For a larger peek inside the upcoming season of The Voice, read Billboard’s full cover story out Sept. 12.