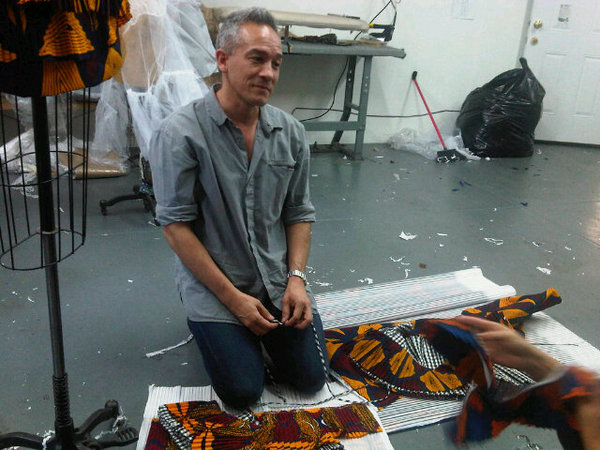 This is sweet: In a new interview with The Houston Chronicle, L.A.M.B. designer Cesar Galindo says that working with Gwen gave him the confidence and excitement to continue working on his own fashion line again following the tragic passing of his partner in 2008;he will be presenting his new collections at Fashion Houston next week.

Bringing it home: Cesar Galindo
Although he’s lived in New York for last 22 years, Cesar Galindo holds tightly to his Houston roots.
“I’m a good ol’ Houston boy,” the designer said from his New York studio. His childhood included the Saltgrass Trail Ride for the Houston Livestock Show and Rodeo. “I did six years in a row. That means something.”
Fashion Houston will be a homecoming for Galindo. On Tuesday, he debuts Czar by Cesar Galindo, a new moderately priced line. On Thursday, he’ll show his signature gowns and evening wear with a “Rojo” theme. All the dresses in that collection are red as a tribute to World AIDS Day. Galindo is co-chairing the event in Houston.
Galindo got his start at Milby High School by constructing gowns and party wear for his friends. He left school to pursue fashion in New York, where he landed a job as a show-room manager.
“My education was in that job,” he said. “I met everyone I needed to know in order to start my business. It prepared me for what I’m doing now.”
In 1994, he launched a signature line, and the same year his kimono dress appeared on the cover of Elle magazine. His evening wear has been sold in the nation’s noted retailers, including Saks Fifth Avenue and Henri Bendel.
For the past three seasons though, he’s been designing for Gwen Stefani’s L.A.M.B. collection, an opportunity that came after the death of his business and life partner, Seth Cowen, to colon cancer in 2008.
“I had to take a break from my own work because it was hard to go on without Seth,” he said. “Working with Gwen gave me the confidence and excitement to dive back into my own work. Part of the business as an artist is to re-invent and re-evaluate yourself. That’s what I did.”