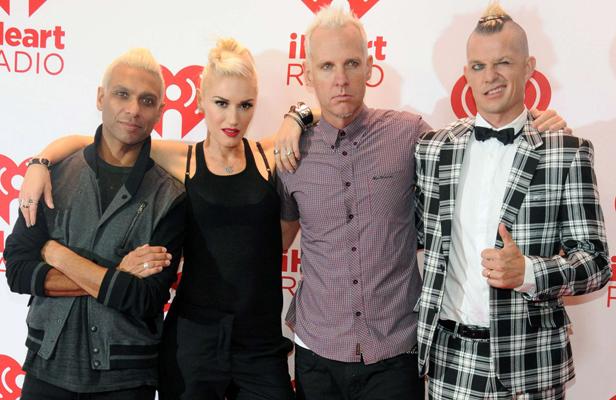 No Doubt recently gave an interview to France’s 20 Minutes-we translated it below.

The American group No Doubt is back in stores Monday after eleven years with the album “Push and Shove”. “20 Minutes” met interpreters “Do not Speak”, visiting Paris for the occasion …

The bar of a large Parisian hotel Monday night, Gwen Stefani laughed out loud when ordering “the best” pink champagne. It is time to celebrate for the pretty blonde who never leaves home without her lipstick flashy. After two solo albums and two babies, now back with his cronies Tony Kanal, Tom Dumont and Adrian Young for the release of “Push and Shove” (Polydor), accents ska, dancehall and electro-pop.

Your new album, “Push and Shove” finally released after more than ten years! How do you feel today?

Gwen Stefani: We do not stop to think that this is happening to believe it (laughs). Pinch me! I’m proud of us, and I’m really happy.

Tom Dumont: When we left our hotel this afternoon, there were fans waiting for us. And they had the new album! We did not expect that at all.

Why is group back now exactly?

Gwen Stefani: We thought back before! Everything is my fault. It is very difficult to be a mother and to write an album together. It was a real challenge. But we did it!

Adrian Young: We continued to work together during this time. We toured in 2004. After two solo albums Gwen Stefani, we started working on this album in 2008 for completion in 2011. It took a long time.

Why did you take so long to record “Push and Shove”?

Adrian Young: Mainly because we have children now.

Tom Dumont: Before No Doubt came first, but this is no longer the case since we are parents.

Gwen Stefani: There is still a lot, but in different ways. I have two little boys. I have to deal with it, be a good mother. It was impossible to spend more than three days a week working on the album. I culpabilisais when I was leaving to go to the studio and I put pressure to move because I did not feel like leaving them for nothing. And then my husband [Gavin Rossdale, lead singer of Bush] has been on tour for a year, it has not simplified things.

This stage of your life has influenced your way of writing as well?

Gwen Stefani: It was much more focused on this album, because we always had little time to write all these new songs. We also wanted to ask about our lives, precisely because we write it. There is no magic button, it was difficult to find inspiration.

Gwen Stefani, you released two solo albums in 2004 and 2006. Why have you removed from the group at the time?

Gwen Stefani: After several tours with No Doubt, I was very inspired to make a dance album. For fun. This was not really part of the identity of No Doubt. The idea to make a record for fun sticking well with my theatrical side. It was a very different artistic project. But during all this time, we continued to see each other. They have supported me and themselves had other musical projects.

Tom Dumont: We are still very close, it is for this reason that we are still able to make a new album together. We decided to take a break because we need to stop. Tours and studio recordings are very intensive. To keep our cool, we had to take a break. But it was always clear that the group does not separate.

Gwen Stefani, the Sun says that you will not ever solo album, confirmed?

Gwen Stefani: I never make plans on the comet. All these ideas had come like that, bim. It was a fantastic time. I prefer to live day to day. Everything goes so fast, we’ll see.

After these projects away from No Doubt, it will not be difficult for the group to reaffirm its identity?

Adrian Young: It will return when we will start to play on television and on stage. Listening to the album, fans gather the group, that’s for sure.

You will start a tour this winter. Are you ready to play again, “Do not speak” again and again?

Gwen Stefani: When doing concerts people think they come to us. In reality, it is just that we see. There are certain songs that I’m a little tired of interpretation, but when you have as it hits that connect the world, you are grateful for life and you play it. This song helped No Doubt exist.