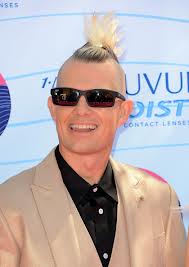 Australia’s Music Feeds has posted a new interview with Adrian,in which he discusses how exciting it is for the album to be out and the recording process. He also mentioned that No Doubt plans on touring the US next year before heading overseas.

Out of the countless reunions that we’ve seen coming out of the 90′s resurgence, few (perhaps even none) have as much credibility and have instilled as much excitement as No Doubt. After hanging up the mic, leads and sticks for more than a decade, the band announced their triumphant return to the music world and have since released their first studio offering since 2001′s Rock Steady. The super-anticipated Push and Shove dropped last week, and Music Feeds caught up with drummer Adrian Young to learn more.

Currently in London with the band for the first time in almost 10 years, Young is clearly loving being back on the horse. “Everything is just so exciting again,” he said, which got us talking about other re-kindled experiences such as studio time with the old bandmates, “Well, to be honest, it’s exciting not to be in the studio, because we were in the studio for a while making this record. But it feels good having the actual physical CD in hand, and playing some of these songs live on television; it’s great, and all that, getting ready for touring.”

Now that Push and Shove has had a couple of days to air and resonate amongst fans, Young explained how the release had been received by those who had been waiting with bated breath for the album: “This was the first time that we put out a record with instant feedback, you know, in this digital age. I was reading some reviews and most people seem to dig it, but the thing about being in a popular band is that people are just going to want to hate. It is all part of being in a popular band. But we just like making music together, you know.”

Throughout the recording process of the album, there were numerous reports from the band and sources close to them that getting back into the groove of this wasn’t so easy. Young explained why this time round may not have been as smooth as previous recording sessions: “We probably recorded many of the songs 2 or 3 times, and changed them up along the way, whereas previously we would kind of settle in on a style for a song and record it and move on. But this time I think that, especially with our producers, they were pushing us to dig deep and experiment and make sure that for the final result we really turned over every stone, if you know what I mean.”

We explored this a little further. With their subscribing to such a specific genre, the conversation took a turn towards where they drew inspiration and ideas for their music, and whether or not that inspiration is still there a decade later: “For most of our records we draw from 80s music. That’s music that we used to live on and that hasn’t gone away. We still draw from that, and it’ll probably always be that way. You always end up making music that you’ve been listing to.”

Young did continue to explain that the band’s priorities had shifted during the break: “There were previously no children in the band, now there are 9, you know? Scheduling and all that became so hard. So with that, having to grow up, your priorities do change. The rules are different.” This is something that surely influenced the process.

So did one of the biggest bands to emerge from the 90s feel the gaze of the world on their backs while they were writing and recording? Young explained that the pressure “is always there. There’s always some sort of pressure, with each record. I mean, I don’t think we felt massive amounts of pressure, but we really did feel it. In the past, when we’d be like ‘lets just get an album out soon’ and keep the momentum going. This time we’d taken such a long time between records, I’d say the rush had gone away, I’d say there was even less pressure.”

After months of reunion news and recording news, we got to the brass tax of things: No Doubt’s next Australian tour, and when it will be.”That’s a really good question. I’m not 100% sure. We’ve toured there before and we’ve really loved the shows we’ve played there. It’s a great place to party, from my memory”. I assured him that it still is a great place to come party. Young continued to say, “We’re planning on coming back… Now that the record is done, we’re going to tour through the US next, that will be summer for you guys, then we will be heading overseas.”

The general vibe on the current climate in the band seems to be more grown up, but by no means boring; if anything, it is more fun than ever. Now with a new release fresh from the print that, despite the gap, fits in perfectly next to its older brothers, the band is living up to their title in more ways than one as they climb back into their throne and are once again crowned kings (and queen) of punk rock, and of that there is No Doubt.