Check out a new No Doubt article in the November issue of ELLE UK featuring quotes from the band,some of which we had posted previously. We transcribed the full article below. 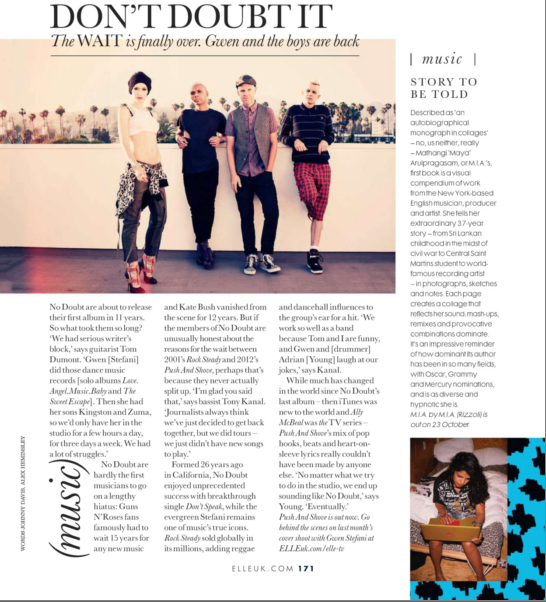 Don’t Doubt It
The wait is finally over. Gwen and the boys are back

No Doubt are about to release their first album in 11 years. So what took them so long? ‘’We had serious writer’s block’’,says guitarist Tom Dumont. ‘’Gwen did those dance music records. Then she had her sons Kingston and Zuma,so we’d only have her in the studio a few hours a day,for three days a week. We had a lot of struggles.’’

No Doubt are hardly the first musicians to go on a lengthy hiatus: Guns N’ Roses fans famously had to wait 15 years for any new music and Kate Bush vanished from the scene for 12 years. But if the members of No Doubt are unusually honest about the reasons for the wait between 2001’s Rock Steady and 2012’s Push And Shove,perhaps that’s because they never actually split up. ‘’I’m glad you said that’’,says bassist Tony Kanal. ‘’Journalists always think we’ve just decided to get back together,but we did tours-we just didn’t have new songs to play.’’

Formed 26 years ago in California,No Doubt enjoyed unprecedented success with breakthrough single ‘’Don’t Speak’’,while the evergreen Stefani remains one of music’s true icons. Rock Steady sold globally in its millions,adding reggae and dancehall influences to the group’s ear for a hit. ‘’We work so well as band because Tom and I are funny,and Gwen and Adrian laugh at our jokes’’,says Kanal.

While much has changed in the world since No Doubt’s last album-then iTunes was new to the world and Ally McBeal was the TV series-Push And Shove’s mix of pop hooks,beats and heart-on-the sleeve lyrics really couldn’t have been made by anyone else. ‘’No matter what we try to do in the studio,we end up sounding like No Doubt’’,says Young. ‘’Eventually.’’