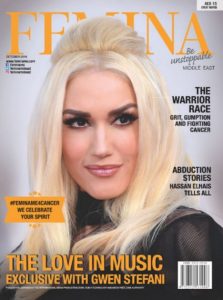 Gwen is the cover girl for Femina Middle East’s October issue. She gave an exclusive interview to Priya Kumar and discussed how after her divorce she dedicated herself into her projects and how that payed off. They covered her new album, Urban Decay partnership and her role in the upcoming movie “Trolls”. We don’t have more details and will try to get the interview to post here, since the magazine will not be released in the US or Europe.

Thrilled to see my exclusive interview with my fave pop star of all time out on UAE newsstands! CC: @FeminaMidEast @gwenstefani @nodoubt pic.twitter.com/ymV6RooaMy