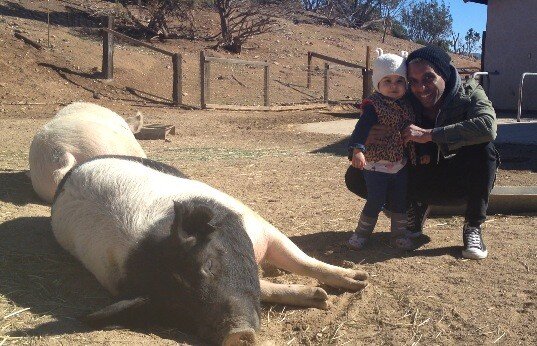 It’s being reported that Tony is lobbying against a bill moving through the Indiana General Assembly that would ban videotaping at Indiana farms and factories. People for the Ethical Treatment of Animals (PETA) apparantly already circulated Tony’s letter to Republican House Speaker Brian Bosma on Thursday. The articles mention that Tony lived in Indiana as a child;we’ve learned that he did indeed live there briefly after his family moved to the US from England and before they settled in Anaheim when Tony was eleven. Tony of course has been an outspoken advocate for animal rights and we applaud his continued efforts to protect animals everywhere.

Bassist Tony Kanal of the group No Doubt is lobbying against a bill moving through the Indiana General Assembly that would ban videotaping at Indiana farms and factories.

Kanal, who lived in Indiana as a child, wrote Republican House Speaker Brian Bosma to say that the bill would stop whistleblowers from exposing animal abusers.

Supporters of the measure say farmers and factory owners’ names are besmirched on sites like YouTube by activists who selectively edit videos.

The Senate approved the measure 30-20 this week. It’s now in the House.

The Senate modified the bill slightly to allow videographers a defense if they provide evidence of abuse to law enforcement within 48 hours of gathering footage.

UPDATE: Tony just tweeted a link to a link to a PETA article about the issue as well as his letter and asked fans to take action by writing their own letters against the bill:

if this peta.vg/sp upsets u as much as it does me PLZ write a letter! i did @peta bit.ly/ZjAtj5 bit.ly/YqrUDL

Indiana’s proposed “ag gag” bill made it through the Senate and has landed in the House. But multiplatinum musician Tony Kanal is calling on the state, where he spent time as a child, to do the right thing and squash this very wrong bill. Indiana Sen. Mark Stoops is joining Tony in speaking out against the bill, having likened it to his trip to Communist-era Romania, in which he was prohibited from taking photos. Says Sen. Stoops, “This is an attack on our 1st Amendment rights and another example of Big Government protecting industry at the expense of the public’s welfare.”

Like other “ag gag” bills, Indiana’s version, Senate Bill (S.B.) 373, would make it illegal for people to film on factory farms. S.B. 373 would allow whistleblowers some protection if they handed over their video to authorities within 48 hours of capturing it. But this is a thinly veiled attempt to garner more support for the bill.

As PETA has witnessed time and again in our undercover investigations, it is crucial that investigators be able to prove that the abuse they documented was pervasive and systematic, rather than an isolated incident, in order to get the abusers convicted. In both our West Virginia Aviagen turkeys and Iowa Hormel supplier pig factory farm cases, investigators reported abuse to their supervisors, who failed to stop the abuse and, in some cases, took part in it themselves. Only with extensive video evidence was PETA able to get the abusers charged and convicted (and the abuse stopped), a point that Tony made in his letter to Speaker of the House Brian Bosma.

If you live in Indiana, please urge your representative to vote “No” on S.B. 373.

Because if factory farms have nothing to hide, why are they pushing so hard to make videotaping illegal?