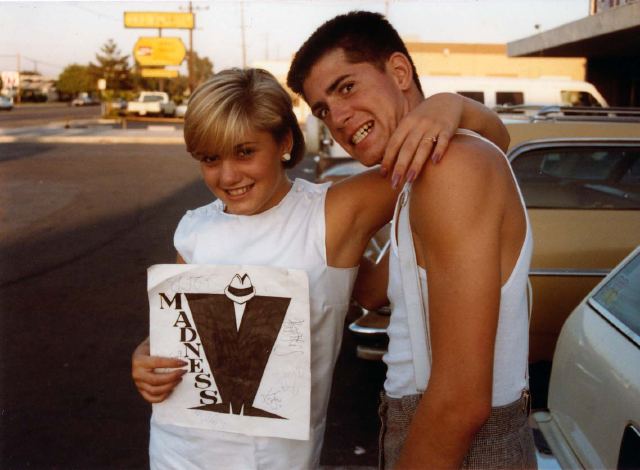 Thanks to Heather for sharing with us a video from tonight’s E! News where the hosts talked about the adorable photos that Gwen tweeted yesterday of herself and Eric as teenagers. The photos have been getting a lot of media attention-thanks again to Gwen for sharing them!

The 42-year-old singer and fashion designer tweeted a YouTube video with footage of her teenage self showing off some clothing she designed. ” i remember this girl – still the same voice a little deeper hair a little lighter! gx,” she tweeted.

Stefani then shared a photo of herself with her older brother and former No Doubt bandmate Eric, writing: “me & my super cool brother eric s- 8th grade- holding autographs of our favorite band madness – 5 years before nd gx,” and added that her mom made the dress she’s wearing in the picture.

She gave fans another blast from the past, posting one more photo of herself and Eric from 1983. “so cute me and eric 83′ wish i still had that dress gx,” she tweeted.

Of the almost 30 years since that photo was taken, Gwen has been married to Bush frontman Gavin Rossdale for nearly 10 years and together they have two sons, Kingston, 5, and Zuma, 3. After a lengthy hiatus from No Doubt to pursue a solo career, the band will be releasing their first album since 2001’s “Rock Steady” later this year.

First off, welcome to Twitter, Gwen Stefani! The No Doubt singer joined the social network yesterday, and we’ve already been graced with some amazing throwback gems straight from the source, aka Gwen is tweeting childhood photos of herself. Score! Unsurprisingly, Gwen has been cool ever since she was a little kid. Peep the photo above—it’s Gwen and her brother Eric circa 8th grade. Awww! She said her mom custom-made the edgy white sheath dress, and we’re kiiiinda jealous. We did not look this put together in middle school to say the least. (Crooked teeth and wispy bangs, anyone? Yikes.) She also rocked some soft blonde layers and a fresh-faced visage. But wait, there’s more!

Gwen also tweeted this photo of her and her brother around 1983. She said, “wish I still had that dress,” and we have to agree! A black and white floral frock never seems to go out of style, especially when it hits right below the knee. We could totally see Gwen sporting this retro dress today with some perfect pin curls, bright pink lips, and sky-high platforms. But what do you think—do you like Gwen’s 8th grade style?

Before she sold more than 30 million records, created the L.A.M.B. fashion line that rakes in more than $150 million annually, and became wife to Bush frontman Gavin Rossdale and mom to sons Kingston, 5, and Zuma, 3, Gwen Stefani really was “Just a Girl” from Orange County, California. The 42-year-old rocker reminded us of her roots in ’80s SoCal on Wednesday when she finally set up a Twitter account and promptly tweeted a video and pics of herself in her younger years.

The photos, which Gwen described as being from the eighth grade and 1983 (in other words, when she was 13 or 14), showed the teen with her older brother, Eric. In one, she’s clutching an autograph from what she described as her “favorite band,” the British ska and punk group Madness. As fans will remember, Eric, who’s now 44, was actually the founder of No Doubt, and left only after convincing his kid sister Gwen to join, and recording the successful Tragic Kingdom. Interestingly enough, he split with the group to work on a different kind of art — becoming an animator for “The Simpsons.”

Of course, the biggest news is that Gwen tweeted! The “Hollaback Girl” and her bandmates launched Twitter accounts to mark a very special occasion. “After a few raucous party performances in the months preceding, No Doubt played its first official club gig at Fender’s Ballroom in Long Beach, California on March 14, 1987,” the group posted on its website. “The show, headlined by The Untouchables, found No Doubt playing second among a lineup of fourteen bands that night. Twenty-five years later, No Doubt are still making music together.” In fact, the band behind hits like “Sunday Morning” and “Don’t Speak” is currently on its first album since 2001’s Rock Steady. No word yet on when it will be released. Will you be excited to hear the group’s new songs?