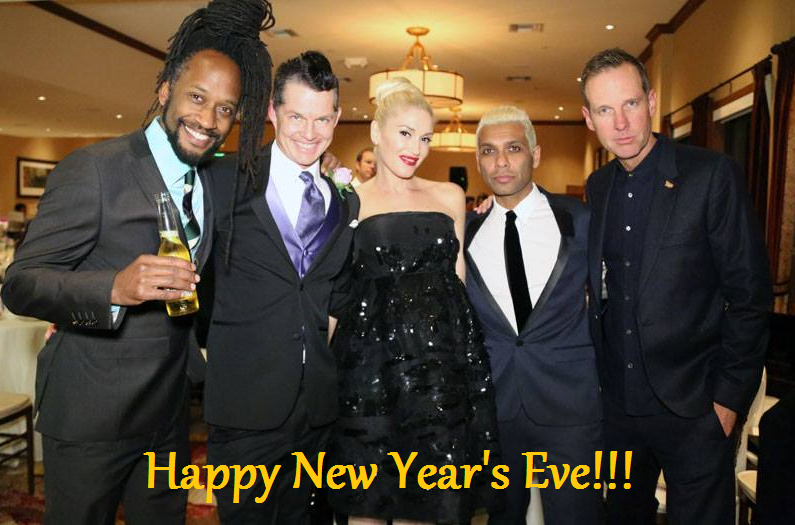 All of us at EIT wish a happy and safe New Year’s Eve to No Doubt,their families and to everyone!! As most fans know,No Doubt performed for the very first time at a New Year’s Eve party in 1986,so a very Happy 27th Anniversary to the best band in the world!

It was a memorable 2013,kicked off by No Doubt’s mini concert on Jimmy Kimmel Live and the announcement that the band was returning to the studio to work on new music. (They would later explain that they were postponing their tour plans for that very reason.) While in the studio the first half of the year with collaborators such as Shellback, Planet VI, Pharrell Williams and Greg Kurstin (they were also said to be working with others such as Skrillex, Rock Mafia and Ryan Tedder), the band shared lots of photos on Twitter,with Tom describing the new songs as ‘’all different- some epic, some beautiful, some fun, some ska some rock some reggae some wicked some loud.’’ In the meantime,Tom launched the Zora guitar line with GJ2 Guitars at the NAMM Show and the band celebrated their three big wins for Best Album,Best Music Video and Best Song at the OC Music Awards,as well as debuting their awesome clothing collaboration with Fred Perry.

2013 also brought the arrival of two new No Doubt babies,with both Gabe and Tony and their wives welcoming baby girls Isis and Saffron,respectively. Gwen had the honor of gracing the cover of Vogue for the second time and joining The Rolling Stones onstage for a surprise performance,as well as surpassing 1 million followers on Twitter. She also released more fabulous L.A.M.B. and Harajuku Mini collections (including a L.A.M.B. outerwear collaboration with Burton Snowboards and a Harajuku Hugs line with Build-A-Bear) and launched a Harajuku Lovers online pop up shop featuring new,limited edition shirts,all the while winning rave reviews for her stunning,glowing appearances at red carpet events such as the Met Gala and Wallis Gala. It was at the latter event that rumors of Gwen’s third pregnancy seemed to be proven true,though Gwen has yet to officially confirm the happy news herself.

In other exciting news, OPI announced its partnership with Gwen for a seven-shade nail lacquer collection inspired by Gwen’s iconic,glamorous style. We look forward to the collection’s official launch tomorrow,January 1! Gwen ended the year with photoshoots and meetings for a new,secret project, promising on Twitter to let everyone know about it as soon as she can. Tony embarked on side projects as well,as he was pictured in the studio with singer Breanna Kennedy, Jessie Malakouti of Jessie and the Boy Toys, Neon Trees frontman Tyler Glenn and his musician friends Moby,Toby Morse and Travis Barker. For his part, Adrian drummed on the Electric Valentine song ‘’Time Bomb’’ as well as for Jelly of the Month Club.

Although Tom said that No Doubt is currently on hiatus,we remain hopeful for more band news in the coming year. Happy 2014!!! As we anticipate ringing in the new year,let’s a take look back at No Doubt and Gwen’s past New Year’s Eve TV appearances: