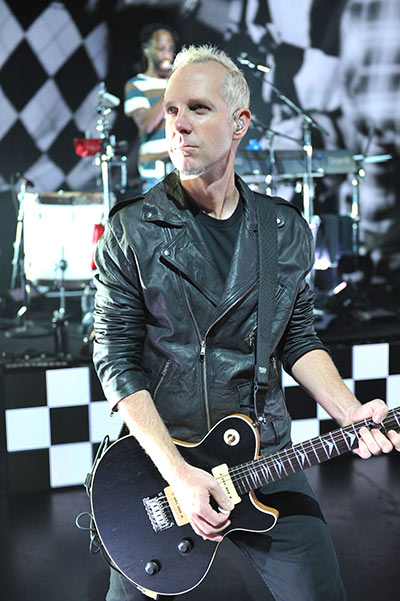 PremierGuitar has posted an article with Orange County manufacturer GJ2 Guitars’ announcement that its Zora model (whose design has had technical and aesthetic input from Tom and whose prototypes Tom has been rocking during No Doubt’s recent performances) will be unveiled at the Winter NAMM Show in Anaheim later this month. The article features a quote from Tom where he talks about the collaborative process of making the prototypes with the goal of having ”the perfect version of Zora”. As most fans know,Tom has been sharing updates and photos of the prototypes on his blog-they all look awesome and we wish him and GJ2 Guitars the very best in launching the line!

Grover Jackson’s GJ2 Guitars has announced two new models and a line of pickups in advance of the Winter NAMM Show: a bolt-on version of their Arete, a new single-cut in collaboration with No Doubt’s Tom Dumont, and Habanero pickups.

Zora
While No Doubt has been touring in support of its new studio album Push And Shove, the band’s guitarist, Tom Dumont, has been playing a newly designed guitar called Zora. The instrument is not yet available in music stores, but that’s about to change beginning in January.

During No Doubt’s recent television appearances and live performances, notably their seven-night residency at the Gibson Amphitheatre in Los Angeles, Tom has been seen and heard using three different prototypes of the new Zora guitar built by Orange County, California manufacturer GJ2 Guitars. The Zora model is designed by GJ2 co-founder Grover Jackson with technical and aesthetic input from Tom. Zora prototypes have been made using mahogany and Sapele (African mahogany) wood and are built to maximize stability, sustain and tone. The company’s own Habanero pickups as well as the volume and tone knobs and other hardware are all made in-house. Mother of Pearl chevron-shaped fretboard inlays are inspired by Art Deco architecture. Zora protoype 3 features a natural hand-oiled finish and Super-Vee “BladeRunner” tremolo. Tom Dumont commented, “Grover is amazing. He’s made me three guitars so far and they all play beautifully. By making prototypes we’re able to try out different ideas, find out what works, discover and correct any flaws. It’s a process. By the end of it we will have the perfect version of Zora.”GJ2 Guitars is preparing to launch a full line of Zora guitars in 2013, to be unveiled at the January Winter NAMM Show in Anaheim.