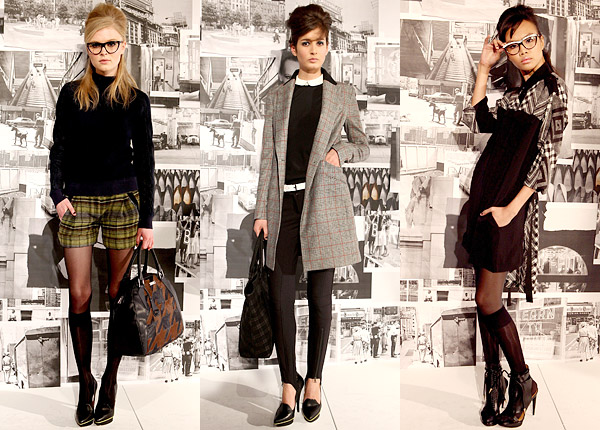 In a new interview with Billboard, DJ Jeremy Healy,who worked with Gwen on putting together the playlist for the Fall 2012 L.A.M.B. presentation(and has worked with her for past L.A.M.B. fashion show music) shared the full playlist. He also mentioned that she was in LA working on finishing the No Doubt album when they collaborated this time and that Gwen wanted music from ”the soul scene in England and late ’50s, early ’60s soul and rock’n’roll in America” to set the mood for the showing-it certainly is a diverse and amazing soundtrack!

s Nancy Sinatra fused with Sly Stone and rap jams, Gwen Stefani’s cheeky Fall/Winter L.A.M.B. Collection took to the stage on Saturday (Feb. 11) at Lincoln Center. Blending ’60s style with modern punk touches, the singer’s new L.A.M.B. line channeled another pop star: the late Amy Winehouse. While not as direct as John Paul Gaultier’s recent couture collection that was directly inspired by Winehouse, Gwen created more of an Amy attitude throughout the line but kept the “Back to Black” singer’s signature beehive hair on the models.

The effortlessly cool and tough collection was modeled against a backdrop of black and white snapshots of New York City and close-ups of models having their makeup applied. Mostly black, white and grey, pieces ranged from pleated skirts to cropped jackets to cat-eye secretary glasses with touches of red, blue and yellow throughout. While unfortunately a no-show once again, Gwen was still felt in the form of sheer knee-highs, houndstooth print, and of course, a killer soundtrack, which came together thanks to DJ Jeremy Healy. We caught up with Healy, who has worked with Gwen in the past, on the mashup for her “Wind It Up” single and previous fashion shows, to chat about the musical selections.

Billboard: How was it working with Gwen?

Healy: She was in L.A. finishing the No Doubt album and we were in London. It’s a lot more fun when we are all in New York putting it together — together!

What was Gwen looking for in terms of music?

This time it was all about badass girls with attitude — the soul scene in England and late ’50s, early ’60s soul and rock’n’roll in America.

I see a bit of Amy Winehouse influence in this collection. Do you think she was an inpiration for the collection?

I usually give a show a nickname and this one I dubbed “Oh Beehive!” You get the picture?

“I Heard It Through The Grapevine” – The Slits

“Dance To The Music” – Sly and The Family Stone

“Feel It” – The Tamperer

“Sunshine of Your Love” – Spanky Wilson

“He Was Really Sayin Somethin'” – The Velvelettes

“These Boots Are Made For Walkin'” – Nancy Sinatra