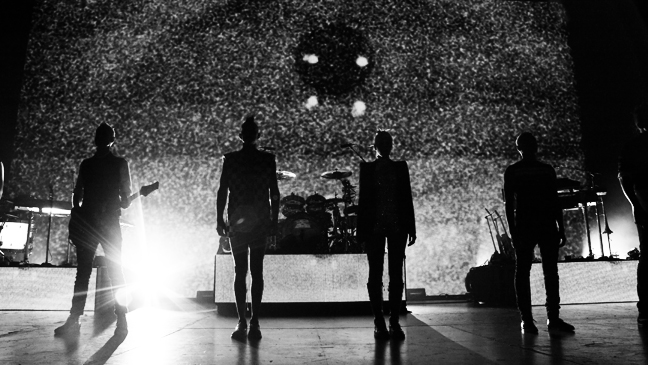 The Hollywood Reporter has posted a glowing review of No Doubt’s November 30 Gibson show,along with an awesome photo slideshow that we posted earlier on facebook.

Yes, No Doubt has been a band since 1986, but even the most hardened of road warriors would be putting their performing chops and stage stamina to the test with a seven-night run at L.A.’s Gibson Amphitheatre. The fact that the band hasn’t had a new album in over a decade? A disadvantage to most, but not this four-piece fronted by Gwen Stefani.

In fact, she was more worried about the Friday night crowd’s resilience, and midway through their scheduled performances, having previously played shows on Sunday, Monday and Wednesday, Stefani acknowledged the turnout with a thank you: “You’ve been working all week, you’re exhausted, and you still f—ing came to see us,” she said to rapturous applause from the 6,000-plus audience members.

While the back of the house happily sang along with beers in hand, engaging mostly in the band’s biggest hits “Just a Girl,” “Don’t Speak,” “Hella Good,” “Ex-Girlfriend” and “Settle Down,” it was the pit that was filled with superfans. Among them: a man with Stefani’s face tattooed on his arms, a woman desperately hoping for a Stefani-designed wedding gown, devotees sporting hand-made signs, and a 20-something who was invited on stage to display her sign that read, “I’ve been listening to No Doubt for 17 years.”

By our count, that puts her right around the Tragic Kingdom and Beacon Street era, but not quite at the ultimate fan status of their 1992 self-titled debut. Nonetheless, Stefani was impressed with the fan’s commitment and invited her up on stage to “make out or something” during the encore. Alas, they did not lock lips, but there were several hugs and bassist Tony Kanal stepped in to snap an iPhone photo of the duo in front of the audience. Talk about a show memento.

Opening about 20 minutes behind schedule, Stefani hit the stage with the energy of a pop star have her age, jumping around in a sparkly silver romper and a long black jacket, paired, of course, with black lace-up boots and fishnet stockings. The 43-year-old mother of two hardly looked the part of parent, exhibiting her royal rock highness status on “Push and Shove,” “It’s My Life” and “Hella Good.” As Kanal strived to keep up with Stefani’s energy (decades after ending their relationship, the two still clearly have chemistry — frequently dancing together and getting lost in the music), Stefani shows no signs of slowing down and miraculously manages to hold on to her breath control in the process. Unlike many live shows, however, the stage went completely dark between songs with an audible pause. The mini-breaks did not result in any set changes, so one can only assume they were there to allow Stefani a quick recovery before whirling back on stage.

“I’m getting such a good vibe tonight,” Stefani mused after “Ex-Girlfriend,” one of the night’s most well-received hits, in which the entire auditorium — loud and without hesitation — finished the track with a rousing “But I shoulda thought of that before we kissed.”

Things did slow down for the regga-rific “Underneath It All,” featuring a trumpet solo from Stephen Bradley, the acoustic “Hey You” and the ballad “Simple Kind of Life,” clearly penned prior to Stefani’s marriage to Bush frontman Gavin Rossdale and the subsequent birth of their two children. As she crooned “I always thought I’d be a mom,” a smile crept to Stefani’s lips and the crowd went wild. Watching her on stage, it’s puzzling to connect Gwen Stefani the superstar with Gwen Stefani the mom — a sensation probably not unfamiliar to her two sons.

Those who were new to the No Doubt concert experience may have been surprised at the presence of trumpeter Bradley and trombonist Gabrial McNair, who also aided Stefani on vocals. The duo are rarely included in the band’s promotional materials, but have been touring with the band since the mid-1990s.

Among the most visually performances: “One More Summer” and “Sunday Morning.” While tonally different, each song included a backdrop of what looked like personal home footage. On “Summer,” it was video of a family at the beach circa the 1970s and on “Sunday,” there was staged footage from inside Kanal, Tom Dumont, Adrian Young and Stefani’s respective homes. Each donning white robes, the video chronicles their routines on — you guessed it — Sunday mornings, in which they read the paper, drink coffee and play with their kids.

The group reached a crescendo with the song that made No Doubt famous: “Just a Girl.” It came just before the encore and Stefani held nothing back. Indeed, when she needed more, the power singer challenged the audience to chant along until her ears bled. Naturally, she then instructed all the men in the audience to sing along with the chorus and then later teased that the women would put them to shame. They did.

By the time the encore came around, it seemed there was little left to be played. Their current single, “Looking Hot,” of course, but what else? Changing from her romper into something straight out of her ’90s closet (a sparkly red crop top and billowy red pants with sneakers), Stefani put her rock-hard abs on display and looked, well, hot.

They next launched into “Total Hate,” which was selected as a fan request online. “I thought this song was retired, but apparently not,” Stefani said as she introduced it. And before taking their final bow, No Doubt kicked things back up a notch with “Spiderwebs.” At the end of it all, they made a less-than-dramatic exit from the stage, instead opting to stay and sign autographs for fans lucky enough to nab front row seats. After a few minutes of hand-shaking and high-fiving, they waved goodbye and calmly made their way backstage as the audience, equally well-behaved, exited the Gibson.

If No Doubt has mellowed, it seems unavoidable that their fanbase has, too. But for one night (or seven), all were transported back to the glory of the ’90s. If nothing else, the performance proved that while the Push and Shove-era will still please loyal fans, it’s the old classics that just might be impossible to top.