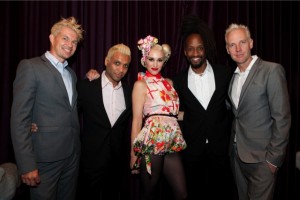 The band’s management Rebel Waltz has graciously shared photos and a press release featuring heartfelt quotes from Gwen and Tony about the Royal/T Cafe tea party-much congratulations again to Gwen and everyone involved on helping to raise so much for Save the Children’s Japan Fund!!

On June 7, Gwen Stefani hosted a private Harajuku-themed tea party at Royal/T to benefit Save the Children’s Japan Earthquake-Tsunami Children in Emergency Fund. Guests were treated to a surprise performance by No Doubt.

Stefani said, “Meeting the fans who donated their money for Save the Children’s relief effort in Japan was so inspiring. It was an incredible day filled with lots of emotion. I can’t believe I had the opportunity to host an event that could actually help people. I never thought that in my life I could make a difference but through the power of music and fashion we were all brought together to help the kids in Japan. It feels amazing to give a little back to a culture that has given me so much.”

“Gwen’s Save the Children event was a beautiful evening. Not only could we do our small part in the effort to raise funds for those affected by the Japanese earthquake and tsunami, we got to play an extremely fun and intimate surprise live set for the very generous fans that donated a lot of money for a great cause,” said No Doubt’s Tony Kanal.

Following the devastation caused by the recent earthquake and tsunami in Japan, Gwen personally donated $1 million to Save the Children. To raise additional funds she hosted the Harajuku-themed tea party at Royal/T for 200 loyal fans and helped to raise nearly $120,000 more for the charity and their relief effort. Generous vendors who donated services for the event included UK-based Momiji, Eric Buterbaugh Flower Design, Lauren Hillary Photography, Rony’s Photo Booth, Valet of the Dolls, and Classic Party Rentals. All funds will go to Save the Children’s Japan Earthquake-Tsunami Children in Emergency Fund. A high tea was provided by Royal/T.

EDIT-The press release and photos have now been posted at NoDoubt.com.

No Doubt tweeted to say that the photos were added to NoDoubt.com and to thank Momiji and Royal/T Cafe:

Posted photos of the tea party and surprise performance. bit.ly/kgJkWz Thank you @royalTcafe and @momijiHQ!!