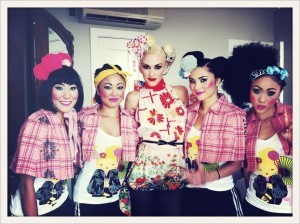 The media is buzzing over how Gwen’s Harajuku-themed tea party at Royal/T Cafe raised over $120,000 for Japan relief.We cannot thank or praise Gwen enough for all she has done to help Japan following the devastating earthquake and tsunami-her charitableness continues to inspire the fans.Thanks to AJ for uploading,watch a video of Gwen’s speech at the tea party HERE-she mentions how the event raised more than $125,000 and says how proud and thankful she is to be helping Save the Children’s Japan Fund.

Gwen Stefani has raised more than $120,000 for aid efforts in Japan by hosting a Harajuku-themed tea party in California.
The singer is a longtime fan of Japanese culture and even traveled with a group of Japanese dancers called the Harajuku Girls during her stint as a solo artist.
She was shocked to see the damage caused by the earthquake/tsunami disaster in the country earlier this year and set about making plans to raise money to help.
Stefani hosted a private tea party at the Royal/T Cafe in Culver City, California to make money for Save the Children’s Japan Earthquake Emergency Fund. She auctioned off tickets to the event back in April and gave attendees a special treat by performing with her band during the evening.
Stefani and her guests were joined by her husband and two sons, as well as her parents.