In the time spent preparing for baby, choosing a name is a critical step, with some parents opting to meet their little one first in order to ensure the moniker is a perfect fit. According to Gwen Stefani, as her two boys grow older and develop their own personalities, she is becoming more convinced there was name mishap along the way! Joking during an interview with 104.7 KISS FM that her sons — 2 ½-year-old Kingston James McGregor and 6-month-old Zuma Nesta Rock — had “the wrong names given to them,” she explains that a swap may be appropriate. 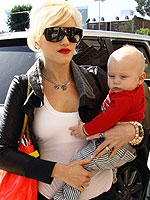 “[Kingston] is in that terrible twos. [My husband] Gavin [Rossdale] calls him Sid Vicious. He’s like, ‘You gave birth to Sid Vicious.’ I’m like, ‘Oops!’ He’s definitely got an attitude and Zuma is the opposite. He’s like this cool, laid back, easy-going guy — is that always how it is?”

While Zuma — or ‘Baby Zooms’ as his big brother calls him — is perfectly content to sit back and relax, Kingston seems to be taking after his musician parents, turning into quite the rock star himself! Along with his passion for “[Top 40] hits like his mom,” Kingston enjoys keeping up to speed with the tunes. Beware, don’t touch that dial, says Gwen! “Any song that comes on, he’ll get pissed if you turn the station. He’ll be like, ‘That’s my song! That’s my song!’” A true lover of music, the toddler already has his eye on one famous singer: Britney Spears. With the pop singer living right down the street from the family, Kingston has been known to stop over at her house for a quick hello.

Clearly smitten with their two boys, Gwen shares that she and Gavin are often left in amazement by their beautiful family. “It’s really mind-blowing to be together all these years and then all of a sudden these little creatures come. You’re like, ‘Who are these guys? Where did they come from? And they’re around the whole time,” she laughs. However, despite being “really tired,” the proud mama reveals the couple are about to embark on a new adventure: a No Doubt tour. Scheduled to bring her family out on the road, the group is in for a wild time! “All the No Doubt guys [except Tony] all have kids as well,” she explains. “We basically have to have a playroom on tour! It’s going to be really really fun having them all with us.”

More on Gwen’s pregnancy, how Zuma keeps his mama in top shape, and Gwen’s thoughts on the paparazzi below!

Ready to head out on the road and see all of her fans, Gwen is thrilled to be past her days as an expectant mom. “I actually don’t really enjoy being pregnant,” she shares. The 39-year-old — who faced morning sickness until she was five-and-a-half months along — admits that the whole “uncomfortable and odd” process is one she has learned to endure. “The first pregnancy, I was on tour until I was four-and-a-half months pregnant. I would cry before I’d go on stage,” she recalls. Once a true believer that the long nine months were to be completely enjoyed, she says her opinions have certainly changed since having two children!

“I thought that I was going to be like this earth mother. When people would complain about being pregnant, I was like, ‘What are you talking about? It’s incredible! Just enjoy it.’”

In order to prepare her body for the rigorous tour, Gwen has been hitting the road in the mornings, going for jogs and lifting weights. While the exercise routines are paying off, she laughs that her one true secret to staying in shape is toting her “squishy” baby boy Zuma! “I have this little chunky baby. Zuma is like the biggest, chunkiest boy,” she says. “He’s gigantic. He actually gets my arms strong because he weighs so much carrying him around!”

Apparently the proud parents aren’t the only ones who think their boys are adorable, whether they be at the park blowing up balloons or out and about running errands around town. At a recent Vanity Fair party, Gwen admits she found it a bit “bizarre” after being told by guests all evening that they enjoyed seeing her family. “Everyone was coming up to me and they’re like, ‘Oh my gosh! Kingston…’ Like they know him!” While the paparazzi shots of her sons are without a doubt cute, the protective mama is still unsure whether she likes their pictures floating around the media.

“I’m not quite sure if that’s okay. I think they need to get, like, a permission slip from me.”