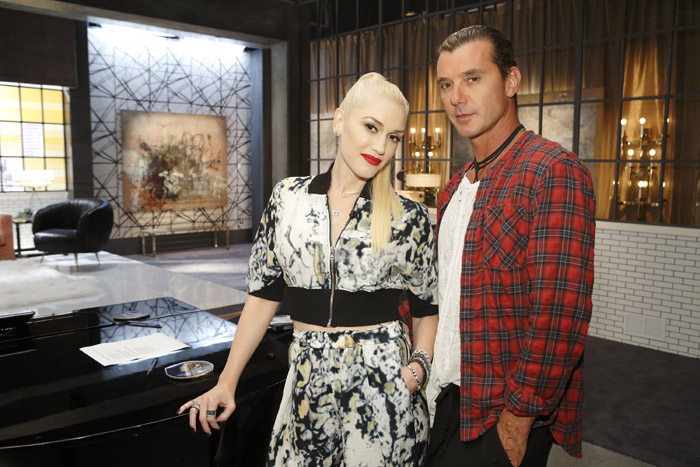 Yahoo and Access Hollywood sat down with both Gwen and Gavin and revealed that Gavin will be Gwen’s advisor on the next season of The Voice, set to premiere on September 22 on NBC! Yahoo also revealed that Pharell is working with Gwen, once again, on material for her “next solo album”, which has been rumored to be released later this year.

Yahoo: Gwen Stefani will be joining The Voice this fall as a new coach, and when it comes time to mentor her dozen contestants, she’ll have a very trusted comrade on her side. Yahoo Music’s Reality Rocks can exclusively reveal that her husband of 12 years, Bush’s Gavin Rossdale, will be the adviser to Team Gwen.

This isn’t the first time there’s been a husband/wife mentoring duo on The Voice: Blake Shelton’s other half, Miranda Lambert, was a Team Blake adviser in Season 2. (Miranda also was a mentor last season, although in that instance, she defected and helped out Team Shakira.) However, Gwen and Gavin’s pairing is a special one, as the two rarely perform together and usually prefer to keep their personal relationship out of the media spotlight.

It’s been almost two years since Gwen made a rare guest appearance during Bush’s set at KROQ’s Almost Acoustic Christmas to duet on “Glycerine.” Will there be another Gwen/Gavin duet on The Voice in Season 7? Watch this space.

Gwen is reportedly working with fellow new Voice coach and “Hollaback Girl” collaborator Pharrell Williams on her first solo material since 2006, and Bush is currently in Dave Grohl’s famous Studio 606 recording the follow-up to the 2011 reunion album The Sea of Memories; Bush’s yet-untitled album is due out in October.

Access Hollywood: “I don’t know how it came about, but it was just one of those things [where] the idea was mentioned – I wasn’t even sure who was mentioning it – and then it came around to, ‘So, next week you ready? You are gonna come and do this?” Gavin told Access’ Liz Hernandez in a new interview.

“It’s a lot of pressure!” he continued. “These people like, I press my button because I thought they sounded good, and then I fight for them. You are in the moment and then they choose you, and it’s like wow, that’s their whole life right this moment! So I felt really responsible.”

This is the first time the Bush frontman has worked with Gwen on a project outside of the studio, and he shared his strategy for being a good mentor for his wife’s team.

“The main thing, from my perspective, is just to make sure that Gwen is so good and excellent like all the other judges on the show,” he said. “It’s just sort of to not interrupt and to normally let her speak, let her do her thing and I’m just like a side thing.”

Gwen said Gavin is doing a great job so far.

“He is super articulate and he has a really good opinion and he is smart and he’s been doing a really good job,” she said. “We both have, I think, a lot of experience in the sense that when you look back at all the shows and all the things we’ve done – and I mean, we all met like touring together and doing hundreds of shows – and it’s so fun to be in the position to meet [all of the contestants].”

NBC also shared a small video clip on Instagram of Gavin revealing his participation on the show!