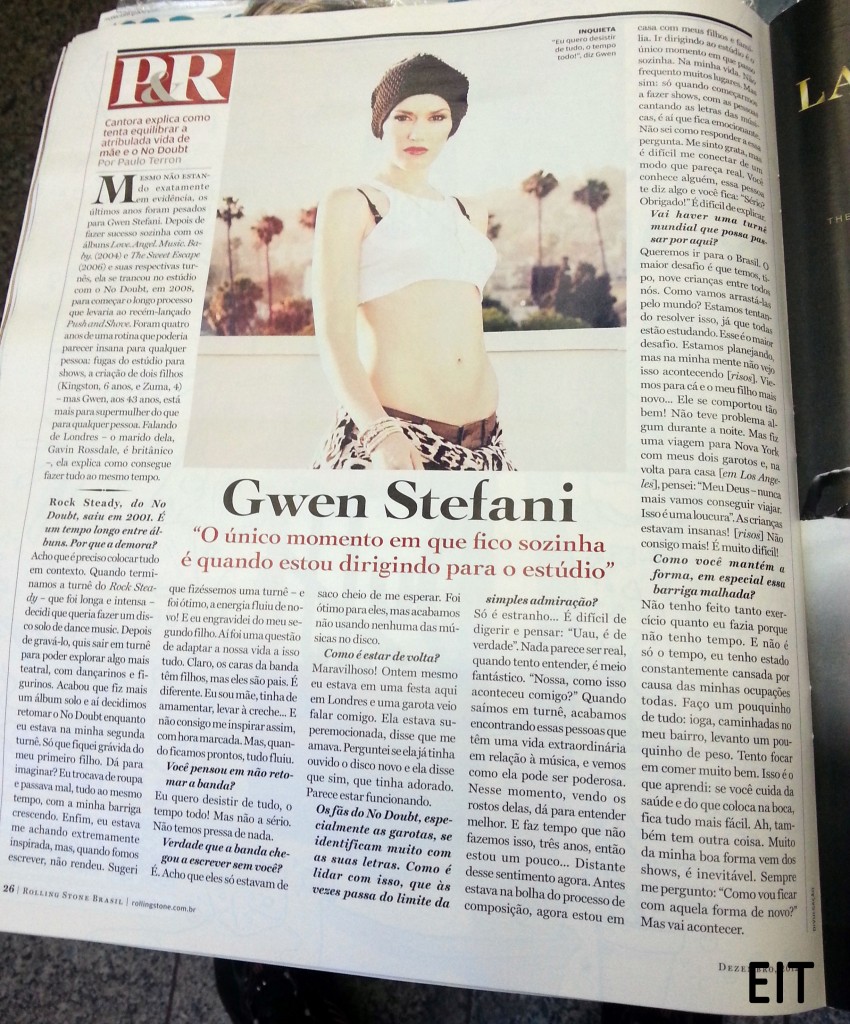 We translated Gwen’s interview from the December issue of the brazilian Rolling Stone. Here it is!

Even not being totally in evidence, the last few years were quite heavy for Gwen Stefani. After making a huge success by her own with Love.Angel.Music.Baby (2004) and The Sweet Escape (2006) and their respective tours, she locked herself in the studio with No Doubt, in 2008, to start the long process that would take to the recently-released “Push and Shove”. It was 4 years of a routine that could take anyone to insanity: escapes from the studio to concerts, raising two kids (Kingston, 6 and Zuma, 4) – but Gwen, at 43, seems like a Super Woman. Talking from London – her husband, Gavin Rossdale, is british -, she explains how she manages to o do it all at the same time.

No Doubt’s Rock Steady was released in 2001. It’s a long time between albums. Why it took so long?

I think we need to put it all into the context. When we finished the Rock Steady tour – which was long and intense – I decided that I wanted to make a solo dance album. After recording it, I wanted to tour it, so I could explore something more theatrical, with dancers and outfits. I ended up making another solo album and then we decided to go back with No Doubt while I was on my second solo tour. It happens that I got pregnant again. Can you imagine? I changed the outfits and felt sick, all in the same time, with my belly growing. Anyways, I was feeling very inspired, but, when we started writing, it didn’t work out. I suggested to go on tour with the guys – and it was great, the energy flowed again! Of course we had to adjust our lives to this all. Of course, the guys also have kids, but they are fathers. It’s different. I’m a mom and had to breastfeed, take to the kindergarten…. And I can’t get inspired from a moment to another. But when we were ready, it all flowed.

Did you ever considered in not returning to the band?

I want to give up from everything, all the time! But not seriously. We do not rush anything.

Is it true that the band started writing without you?

Yes. I think they were just bored of waiting me. It was great for them, but we ended up not using any of those songs on the album.

How is it to be back?

Wonderful! Yesterday I was in a party here in London and a girl came to talk to me. She was super excited and said she loved me. I asked her if she already had listened to the new album and she said yes, that she loved it. It seems to be working.

No Doubt fans, specially girls, identify so much with your lyrics. How to deal with that, that sometimes it goes beyond admiration?

It’s just weird… It’s hard to digest it and think: “Wow, it’s for real.” Nothing seems real, when I try to understand it, it’s kinda fantastic. “Wow, how did this happen to me?” When we go on tour, we end up meeting these people that have an extraordinary life, when talking about music, and we see how powerful it can be. At that moment, seeing their faces, we understand it better. It’s been a long time since we did that for the last time, three years, so I’m kind of… Distant from that feeling now. Before I was inside the writing process bubble, now I’m home with my kids and family. The only moment I spend alone is when I’m driving to the studio. In my life. I don’t go to many places. But yes: only when the tour starts, with people singing along to the songs, that’s when it gets exciting. I don’t know how to answer that question. I feel grateful, but it’s hard to connect in a way that looks real. You know someone, that person tells you something and you are like: “Serious? Thanks!” It’s hard to explain.

Are you going to make a world tour so you can come here?

We want to go to Brazil. The biggest challenge is to have 9 kids among us. How will we take them around the world? We’re trying to figure this out, since they are all in school. This is the biggest challenge. We are planning but in my mind I don’t see this happening [laughs]. We came here and my youngest kind… he behaved so well! We didn’t have any problems at night. But I made a trip to New York with my two boys and on the way back home [in Los Angeles], I thought: “My God – we won’t ever travel again. It’s madness.” The kids were insane! [laughs] I can’t anymore! It’s so hard!

How do you stay in shape, specially the incredible abs?

I’m not working out how I did before cause I don’t have time. And It’s not only time, I’ve been constantly tired with so many things to do. I do a little bit of everything: yoga, strolling on the neighborhood, I lift some weight. I try to focus on easting correctly. This is what I’ve learned: if you take care of your health and what you put in your mouth, it gets so much easier. Ah, there’s something else. Much from my good shape comes from the concerts, it’s inevitable. I always ask myself: “How will I get in shape like that again?” But it will happen.