Thanks to Jay from the official No Doubt forum for finding and sharing a couple of cool Tragic Kingdom-era No Doubt articles that appeared in a French magazine,and further thanks to “S” for translating them for us! 🙂 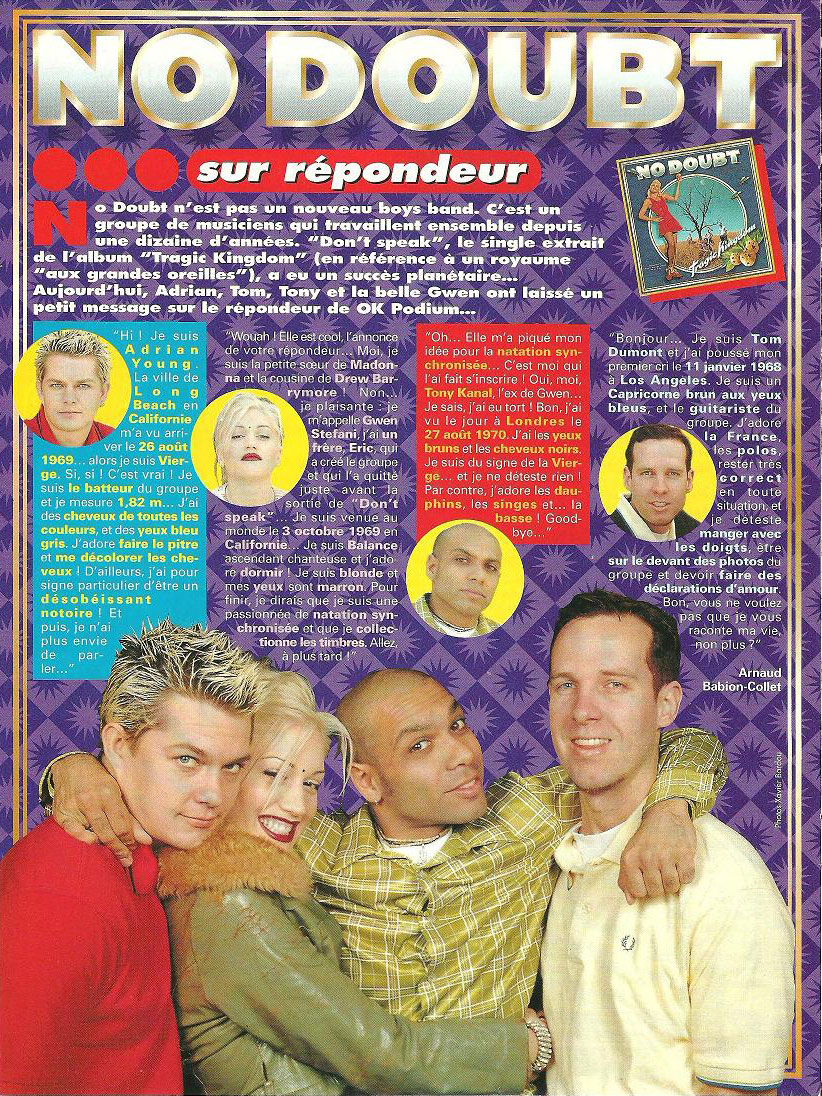 No Doubt on answering machine.

No Doubt is not a new boys band. It’s a band of musicians who work together for over 10 years. “Don’t speak”, the single extract from their album “Tragic Kindgom” (is referring to a kingdom “with big ears”) had a huge sucess worldwide…
Today, Adrian, Tom, Tony and the beautiful Gwen have left a message on OK Podium’s answering machine…

Adrian : “Hi! I’m Adrian Young. Long Beach city in California has seen me arrive on earth, in 1969 on August 26th…So I’m a Virgo. Yes yes! It’s true! I’m the band’s drummer and I’m 6 feet tall…My hair is all different colors and I have blue/grey eyes. I love acting like a fool and bleaching my hair! In fact, I have a special sign of disobedience notorious! And, I don’t wanna talk anymore…”

Gwen : “Wow! Your answering machine’s announcement is so cool..I’m Madonna’s little sister and Drew Barymore’s cousin! No, just kidding : My name is Gwen Stefani, I have a brother named Eric who created the band and left it before “Don’t Speak” came out. I came to birth on October 3rd 1969 in California. I’m a Libra, a singer and I love sleeping! I have blonde hair and my eyes are brown. To finish, I would say that I love synchronized swimming and I collect stamps. See ya!”

Tony ; “Oh..She stole my idea about the synchronized swimming thing..It was me who told her to take classes! Yes, myself, Tony Kanal, Gwen’s ex boyfriend.. I know, I was wrong! Anyway, I was born in London, on August 27th in 1970. I have brown hair and black eyes. I’m a Virgo and I hate nothing! Otherwise, I love dolphins, monkeys and..Bass! Good bye..”

Tom : “Good morning..I’m Tom Dumont and I screamed for the first time on January 11th in 1968, L.A. I’m a Capricorn with brown hair and blue eyes and also, the guitar player of the band. I love France, polos, always being right in any situation and I hate eating with fingers, being in front of the pictures of the band and making love declarations. Well, you don’t want me to tell you all my life, right?” 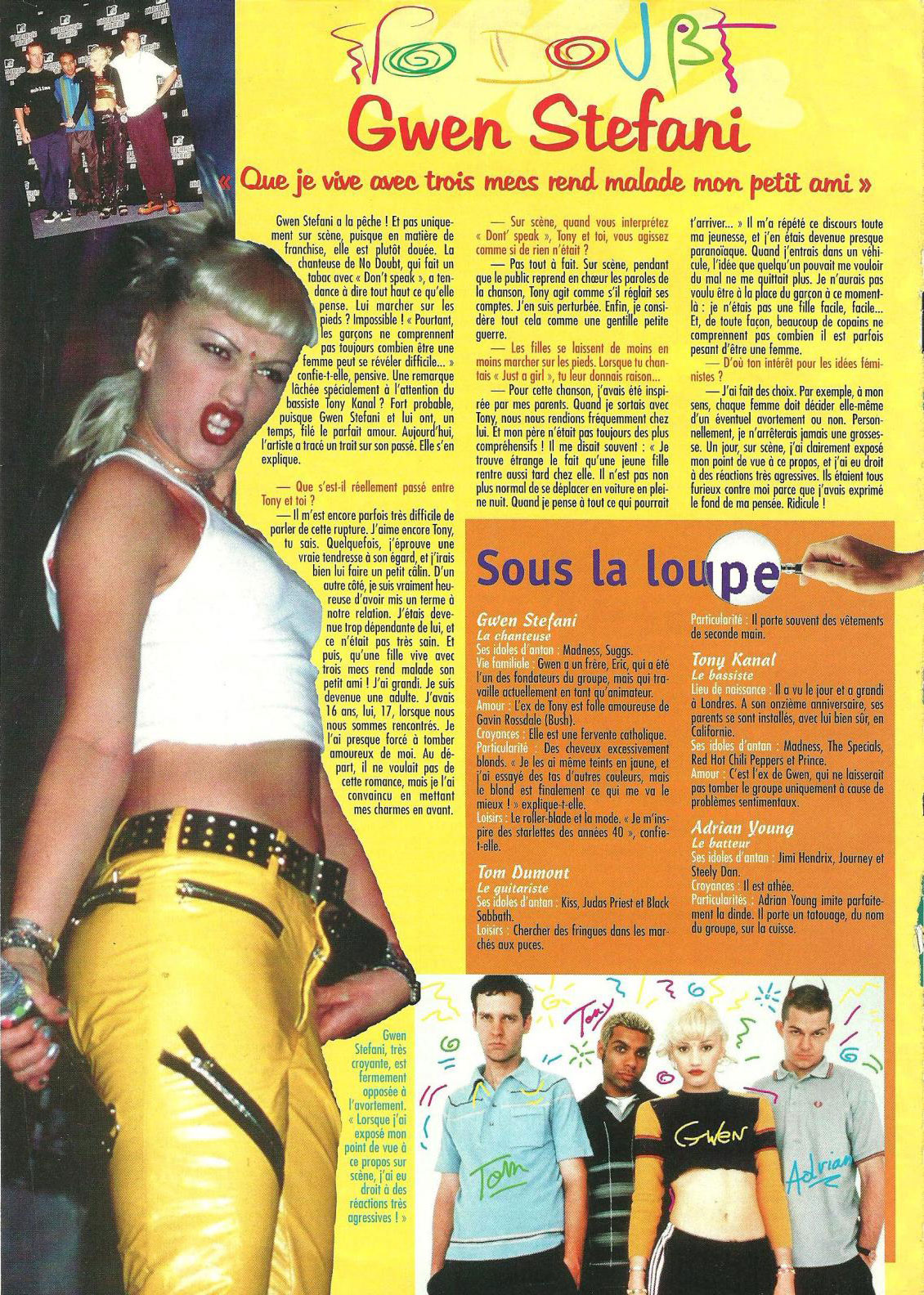 No Doubt, Gwen Stefani : “The fact that I live with 3 dudes makes my boyfriend mad”

Gwen Stefani is full of energy! And not only on stage, because she’s pretty gifted in frankness. No Doubt’s singer who is succesful after “Don’t Speak” tends to say aloud what she thinks. Walk over her feet? Impossible! “Boys don’t always understand how hard it can be to be a girl..” says Gwen, thoughtful. A comment who was said specifically for the bassist, Tony Kanal? Probably because Gwen Stefani and him used to have a perfect relationship. Today, the singer gave up on her past. She explains herself about it.

– What really happened between Tony and you?

Gwen : It’s still difficult sometimes to talk about our split. I still love Tony, you know. I have a real tenderness for him, and sometimes I just want to go and see him just for a little hug. But on the other hand, I’m honestly happy that our relationship is over. I became too dependent on him, and it wasn’t very sane. And, when a girl lives with three guys, it makes her boyfriend sick! I grew up. I’ve become an adult. I was 16 and he was 17, when we met. I almost forced him to fall in love with me. At first, he didn’t wanted this, but I convinced him by putting my charms forward.

– On stage, when you sing “Don’t Speak”, do you and Tony act like nothing happened?

Gwen : Not exactly. On stage, when the audience is singing the lyrics of the song, Tony acts like he settles his business with me. I’m disturbed. Finally, I consider it all like a little friendly war.

– Girls are getting less and less walked all over. When you sings “Just A Girl”, you tell them right…

Gwen : For that song, I was inspired by my parents. When I was going out with Tony, we often went to his house. And my father wasn’t the most understanding one! He often said to me: ‘I think it’s strange that a girl comes home so late at night. It’s also not normal to be in your car late at night. When I think of all the things that could happen to you…’. He said it all throughout my childhood, and I almost became paranoid. When I was into a car, I couldn’t get rid of the idea that someone could want to hurt me. I wouldn’t want to be this guy in question at that time: I wasn’t an easy girl… And, anyway, loads of my friends (boys) don’t understand how hard it can be sometimes to be a girl.

– Where did your feminist ideas come from?

Gwen : I made choices. For example, in my opinion, every woman has to decide for herself whether to abort or not. Personally, I would never stop a pregnancy. One day, on stage, I expressed my point of view, and I received very aggressive reactions. They were furious with me because I had expressed what was on my mind. Ridiculous!

Gwen Stefani
(Singer)
Her idols : Mandess, Suggs.
Family life : Gwen has a brother, Eric, who was one of the founders of the band, but now works as an animator.
Love life : Tony’s ex girlfriend is madly in love with Gavin Rossdale (Bush)
Beliefs : She is a devout catholic.
Characteristic : Excessively blonde hair. “I’ve dyed it blonde and I’ve tried other colours, but blond is what looks best on me!” she explains.
Leisure : roller-blading and fashion. “The singers of the 40s inspire me” she explains.

Tom Dumont
(The guitarist)
His idols : Kiss, Judas Priest and Black Sabbath
Leisure : looking for clothes in flea markets.
Characteristic : He buys most of his clothes second hand.

Tony Kanal
(Bassist)
Birth place : He was born in London. On his 11th birthday, his parents and himself have moved to California.
His idols : Madness, The Specials, Red Hot Chilli Peppers, and Prince.
Love life : He is Gwen’s ex, and he would never leave the band just because of his love problems.

Adrian Young
(Drummer)
Idols : Jimi Hendrix, Journey, and Steely Dan
Beliefs : Atheist.
Characteristic : Adrian Young knows how to imitate a turkey perfectly. He has a tattoo, the name of the band, on his thigh.

Gwen Stefani, who believes in God, is against abortion. “One day, on stage, I expressed my point of view, and I received very aggressive reactions!”