Thanks so much to Platinum Gwen France for sharing scans of a new Gwen article in the French magazine,”BE”.

UPDATE: Thanks again to Platinum Gwen France for sharing HQ scans-she will also translate the article for everyone soon. 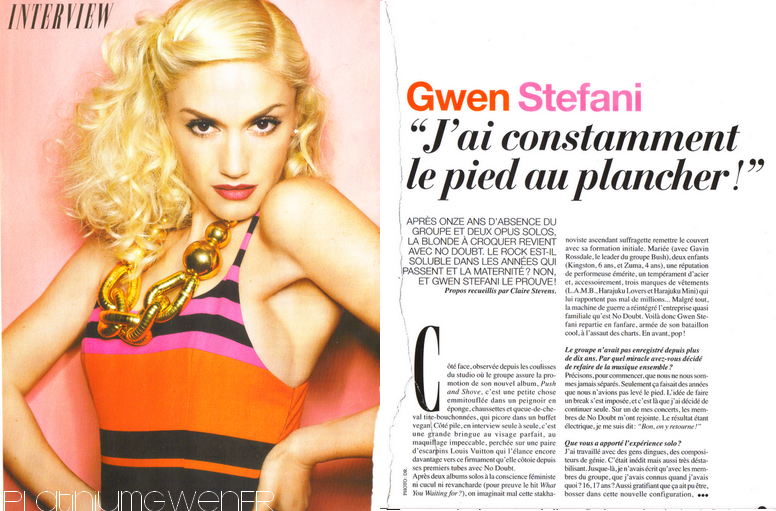 After eleven years of absence from the group and two solo album, the pretty blonde is back with No Doubt. The rock is it soluble in the years pass and motherhood? No, Gwen Stefani proves it!

Front side, seen from behind the scenes of the studio where the band is promoting his new album, “Push And Shove” is a small thing wrapped in a bathrobe, socks and ponytail pull-corked, in a pecking vegan buffet, Tails, in one interview alone, it is a great binge perfect face, flawless make-up, perched on a pair of Louis Vuitton shoes who leaps even further towards the sky she sees since his first hits with No Doubt.

After two solo albums feminist consciousness or corny or revenge (for the hit show what you waiting for?), It was hard to imagine this Stakhanovite ascending suffragette back cover with his training initiale.Married (with Gavin Rossdale, frontman Bush ), two children (Kingston, Zuma and 6 years, 4 years), a reputation for distinguished performer, a temperament of steel and, incidentally, three brands of clothing (LAMB, Harajuku Harajuku Girls & Mini) which relate a lot of million.

Nevertheless, the war machine has now returned almost familly what No Doubt. So Gwen Stefani distributed fanfare, cool army of his battalion, the assault on the charts. Forward, Pop!

The group did not record for more than ten years. Miracle by what you have decided to redo the music together?

Specify, to begin with, we didn’t separate. But it had been years since we had not eased off. The idea of a break is imposed, and that’s when I decided to continue alone. On one of my concerts, the members of No Doubt joined me. and the result being electric, I said, “Well we go back!”

What you bring the solo experience?

I worked with people crazy composers of genius. It was new but also very unsettling. Previously, I did write with members of No Doubt, I had known when I was what … 16, 17 Years? As rewarding as it has been, work in this new generation, it was also a lot of pressure. So back to No Doubt was a real pleasure .

Curiously, between the time you announced plans to work together again in 2008 and when the album will come out it will be later than four years…

I know But even with the best intentions I was unable to dial: if you saw my schedule at the time you would understand why! After my first album I went on tour while I was pregnant with Kingston. I went to four concerts and a half months of pregnancy, I gave birth and right out of my second album I left on the road . In all I gave 106 concerts a good part while I was breastfeeding. My life at that time it was crazy the way home from tour I learned – at the same time we decided to get back to the spot with No Doubt – I was pregnant with my second son … I was leached After giving birth to Zuma I suggested that we can Play concerts before 16,000 or 17,000 people, I was back on track and this is where we could start writing.

How Associating a life of mother and a rock star Agenda ?

This is an ongoing dilemma. at the moment I’m talking , my eldest son is during a summer vacation which doesn’t pose a problem to me. my little one is on the beach with a nanny that raises me much. I do not want my children to suffer from my work, I am constantly on the wire … besides my husband is on tour! I take my children to school I will seek I run daily in addition to the rest, that my various clothing lines that must nevertheless I’m interested. After that I arrive at the studio about 16 hours and I piles up again with the band [laughs] By the time I made the effect of a single mother who is trying to secure on all fronts I feel I n ”ll never, it will necessarily be the case but for the moment it goes … knock on wood!

You can not live otherwise than hundred miles an hour?

Yes, I’d like: I sincerely hate to be fully … even though I constantly work so hard!

Many girls, famous or not, you will be forever indebted to have shattered some stereotypes about womens. This is great but I do not really think. I do realize that when I am in direct contact with our audience, actually. And even then I find surreal that all these people can know our titles – and therefore my life, I sing – by heart. Against by older I get, the more I realize the impact that I have which is not always going girls very famous … younger, I hung around who acted no matter how you know in the end, I’m just trying to do my job as best I can! [Laughs]

You will encourage your children to choose a career in art? and what advice would you give them?

I do not plan that far, but firstly, I will push a primarily passion. The writing, composing give me an unsuspected force. Early No Doubt, my father was one of my écoyter securities coworkers who remained sawn. When he saw their reaction, he said: “Do not change anything persevere because you’re on the right track,” though at the time I did conaissais no talent. What matters to me is that my son had something that takes them to heart as it was and still is my case. That’s how I found my happiness. And this is my reason to live.