No Doubt is on the cover of the October issue of Live Orange County Magazine featuring a candid new interview with Tony in which he discusses the band’s early years,the new album,and touring. We transcribed the full interview below,along with full scans of the article. 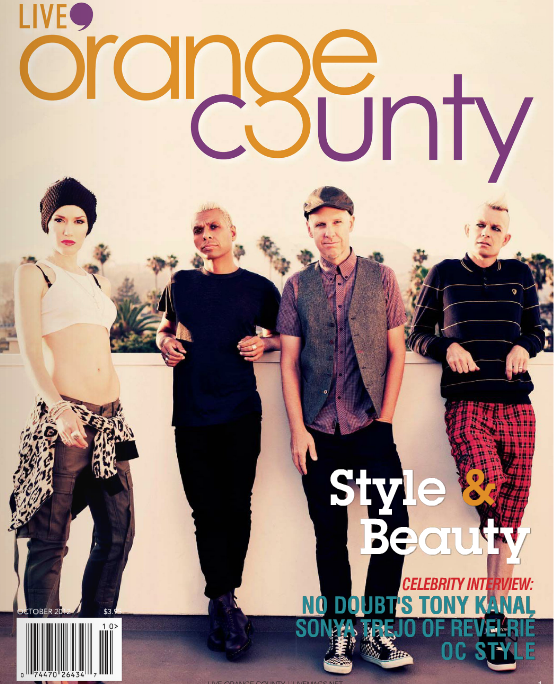 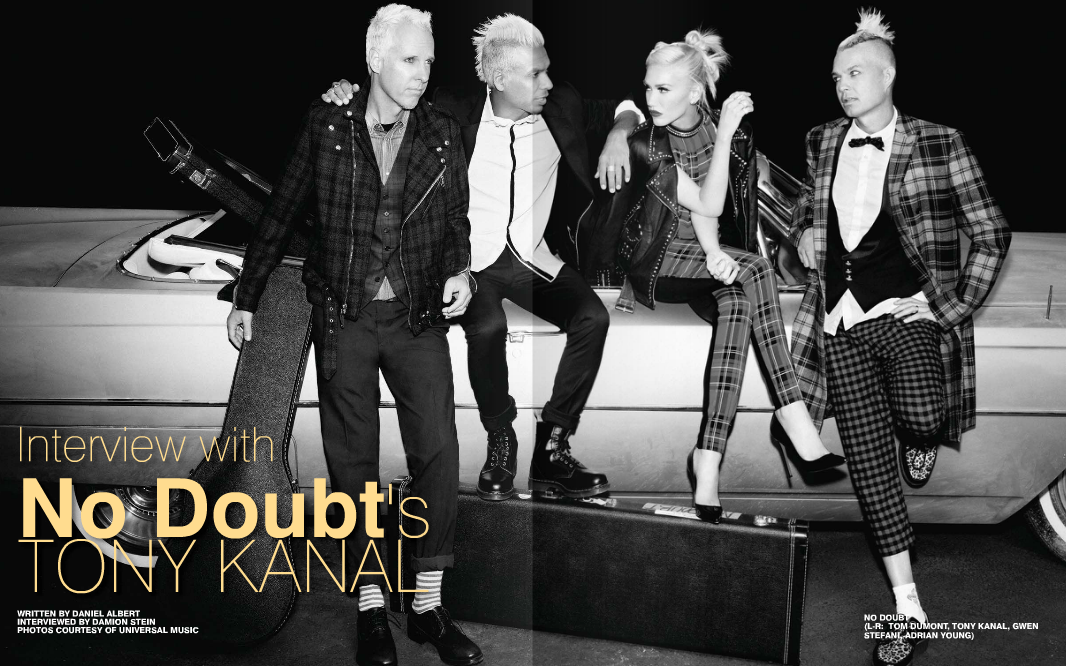 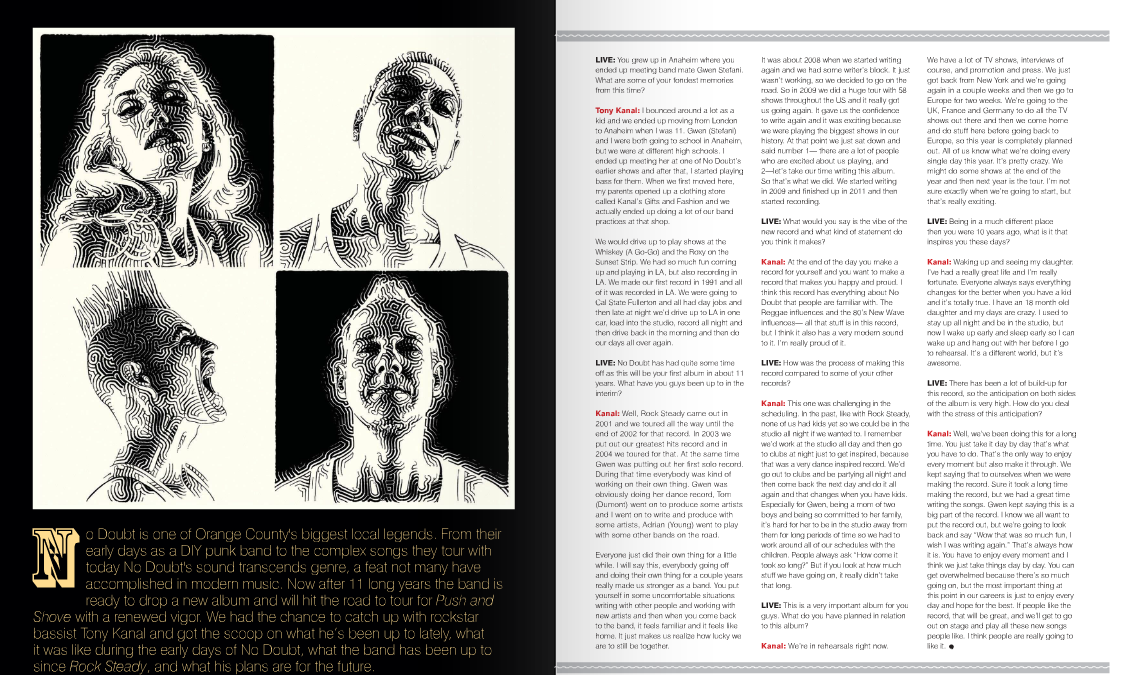 No Doubt is one of Orange County’s biggest local legends. From their early days as a DIY punk band to the complex songs they tour with today No Doubt’s sound transcends genre,a feat not many have accomplished in modern music. Now after 11 long years the band is ready to drop a new album and will hit the road to tour for Push And Shove with a renewed vigor. We had the chance to catch up with rockstar bassist Tony Kanal and got the scoop on what he’s been up to lately,what it was like during the early days of No Doubt,what the band has been up to since Rock Steady,and what his plans are for the future.

LIVE: You grew up in Anaheim where you ended up meeting bandmate Gwen Stefani. What are some of your fondest memories from this time?

Tony: I bounced around a lot as a kid and we ended up moving from London to Anaheim when I was 11. Gwen and I were both going to school in Anaheim,but we were at different high schools. I ended up meeting her at one of No Doubt’s earlier shows and after that I started playing bass for them. When we first moved here,my parents opened up a clothing store called Kanal’s Gifts and Fashion and we actually ended up doing a lot of our band practices at that shop.
We would drive up to play shows at the Whiskey and the Roxy on the Sunset Strip. We had so much fun coming up and playing in LA,but also recording in LA. We made our first record in 1991 and all of it was recorded in LA. We were going to Cal State Fullerton and all had day jobs and then late at night we’d drive up to LA in one car,load into the studio,record all night and then drive back in the morning and then do our days all over again.

LIVE: No doubt has had quite some time off as this is your first album in about 11 years. What have you guys been up to in the interim?

Tony: Well,Rock Steady came out in 2001 and we toured all the way until the end of 2002 for that record. In 2003 we put out a greatest hits record and in 2004 we toured for that. At the same time Gwen was putting out her first solo record. Tom went on to produce some artists and I went on to write and produce with some artists. Adrian went to play with some other bands on the road.

Everyone just did their own thing for a little while. I will say this,everybody going off and doing their own thing for a couple of years really made us stronger as a band. You put yourself in some uncomfortable situations writing with other people and working with new artists and then when you come back to the band,it looks familiar and it feels like home. It just makes us realize how lucky we are to still be together.
It was about 2008 when we started writing again and we had some writer’s block. It just wasn’t working,so we decided to go on the road. So in 2009 we did a huge tour with 58 shows throughout the US and it really got us going again. It gave us the confidence to write again and it was exciting because we were playing the biggest shows in our history. At one point we just sat down and said number 1-there area lot of people who are excited about us playing,and number 2-let’s take our time writing this album. So that’s what we did. We started writing in 2009 and finished up in 2011 and then started recording.

LIVE: What would you say is the vibe of the new record and what kind of statement do you think it makes?

Tony: At the end of the day you make a record for yourself and you want to make a record that makes you happy and proud. I think this record has everything about No Doubt that people are familiar with. The reggae influences and the 80s’ New Wave influences-all that stuff is in this record,but I think it also has a very modern sound to it. I’m really proud of it.

LIVE: How was the process of making this record compared to some of your other records?

Tony: This one was challenging in the scheduling. In the past,like with Rock Steady,none of us had kids yet so we could be in the studio all night if we wanted to. I remember we’d word at the studio all day and then go to clubs at night just to get inspired,because that was a very dance-inspired record. We’d go out to clubs and be partying all night and then come back the next day and do it all again and that changes when you have kids. Especially for Gwen,being a mom of two boys and being so committed to her family. It’s hard for her to be in the studio away from them for long periods of time so we had to work around all of our schedules with the children. People always ask,’’How come it took so long?’’ But if you look at how much stuff we have going on,it really didn’t take that long.

LIVE: This is a very important album for you guys. What do you have planned in relation to this album?

Tony: We’re in rehearsals right now. We have a lot of TV shows,interviews of course,and promotion ad press. We just got back from New York and we’re going again in a couple of weeks and then we go to Europe for two weeks. We’re going to the UK,France and Germany to do all the TV shows out there and the we come home and do stuff here before going back to Europe,so this year is completely planned out. All of us know what we’re doing every single day of this year. It’s pretty crazy. We might so some shows at the end of the year and then next year is the tour. I’m not sure exactly when we’re going to start,but that’s really exciting.

LIVE: Being in a much different place tan you were 10 years ago,what is it that inspires you these days?

Tony: Waking up and seeing my daughter. I’ve had a really great life and I’m really fortunate. Everyone always says that everything changes for the better when you have a kid and it’s totally true. I have an 18 month old daughter and my days are crazy. I used to stay up all night and be in the studio,but now I wake up early and sleep early so I can wake up and hang out with her before I go to rehearsal. It’s a different world,but it’s awesome.

Tony: Well,we’ve been doing this for a long time. You just take it day by day,that’s what you have to do. That’s the only way to enjoy every moment,but also make it through. We kept saying that to ourselves when we were making the record. Sure it took a long time making the record,but we had a great time writing the songs. Gwen kept saying this is a big part of the record. I know we all want to put the record out,but we’re going to look back and say,’’Wow,that was so much fun,I wish I was writing again.’’ That’s always how it is. We have to enjoy every moment,and I think we just take things day by day. You can get overwhelmed because there’s so much going on, but the most important thing at this in our careers is just to enjoy every day and hope for the best. If people like the record,that will be great,and we’ll get to go out onstage and play all these new songs that people like. I think people are really going to like it.