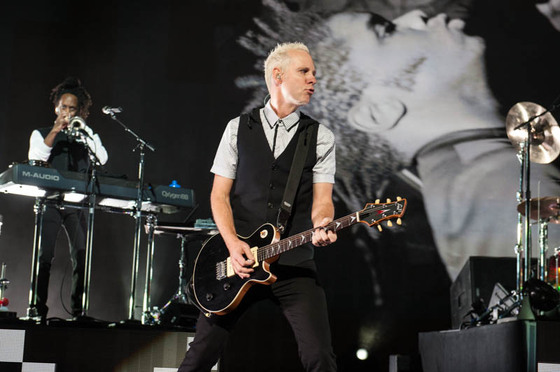 Check out a new Tom interview with G1 Música-we translated it below;it’s a long but great read.

To the listener, the main change between now No Doubt released the album “Push and shove” and No Doubt did successfully for nearly two decades is in the sound: melodic ska of “Tragic kingdom” (1995), which sold more 16 million copies, now share space with influences from contemporary electronic music.

But there is another fundamental change, this personal, between the “two” versions of the group. Who is explains guitarist Tom Dumont, told the G1 phone. “The biggest difference in our lives is probably the fact that we have become parents,” he says with a laugh. “Having children is not very rock’n’roll, but the kids really come first now. Today, the children come before the rock. ”

By the reckoning of the musician, the four members of No Doubt have added up eight children. Two are of Gwen Stefani, the lead singer, married to Gavin Rossdale, leader of Bush. According to Dumont, current life on the road is harder to Gwen than for their partners. He says although the group’s lyrics are still written by the singer, and dealing with her personal life. In “Push and shove,” however, Tony Kanal (bass) started to help in the composition of verses.

“Although the story of the two, they really have a great working relationship, with great respect,” says Dumont. He says this because Gwen and Kanal dated for seven years before the international fame of No Doubt. The ending theme is the relationship, including the band’s main hit, “Do not speak,” single “Tragic kingdom.” Before, they had been released the albums “No Doubt” (1992) and “The Beacon Street Collection” (1995). Then came “Return of Saturn” (2000) and “Rock Steady” (2001).

The guitarist says that the reception of “Do not speak” the label did propose that the quartet to record versions in other languages, such as Spanish and Portuguese. Fearing sound pretty authentic, No Doubt refused, Dumont recalls. Read, then, the main parts of the conversation.

G1 – Gwen has said that “push and shove” is the record of your life. Do you agree?
Tom Dumont – Well, I think that whenever we make a record, we think it is the job of our lives (laughs). Funny thing, this disc is that, when finished recording, mixing and mastering, I was so bored, I could not hear him anymore. I was not listening for about a month. But after that, I had to make a trip an hour drive to Los Angeles, and I thought to myself: “This is my chance, I’ll hear it again, open-minded and like the first time.” Then I heard, from beginning to end, and I felt really good, proud. I think we did a great job.

G1 – In your opinion, what is the main difference between that of No Doubt “Tragic kingdom” and No Doubt for “Push and shove”?
Tom Dumont – Wow! It is this: we are the same people, there is a lifetime in those 15 years. The biggest difference in our lives is probably the fact that we have become parents. Having children is not very rock’n’roll (laughs), but the kids really come first now. Today the children come before the rock. Music and No Doubt have been really an escape. We have two lives, you know?

G1 – How many children do you have in total?
Tom Dumont – I think eight. It’s a gang (laughs). The kids are awesome, everyone is always playing together, are friends. But the hardest part is with Gwen because she is the mother. She has two little boys, who go with her to every corner on tour, because they need the mother – and she must be a mother first. This is the most complicated thing for her.
G1 – Many fans of No Doubt walked praising the fact the band have changed little over the years and good way to Gwen, who does not seem stale. What do you think?
Tom Dumont – This is something funny about us. Looking back at our history, I see that this has always been true. We have this terrible fear of repeating ourselves. At the time of the “Tragic kingdom”, he had incredible success – with “Do not speak”, “Just a girl” and other singles. And when we do the next job, we really did not want to rewrite those songs again.

In that sense, I think we always changed much. The hardest thing about this is that some fans want the band still sounds the way it sounded 15 years ago – and are disappointed when it does not. Moreover, we feel we must move forward, we do not want to stay stagnant.
G1 – The way you work together changed in this new album? Gwen continues to write lyrics?
Tom Dumont – Yes This disc was a little different. In the past, most stayed with Gwen, and she worked hard in the lyrics with Tony. It was a novelty. The truth is that Gwen is still writing songs about her life, about their emotions, feelings, observations. And Tony, instead of bringing ideas to the songs, helped with … more [After short pause] With the grammar, with descriptions. But it’s still the life of Gwen – she’s not singing about the life of Tony, you know? (Laughs) Although the story of the two, they really have a great working relationship, with much respect. It’s great to see them so.

G1 – The lyrics of “Do not speak” is very personal, but it became a hit in places where people do not speak English. Imagine why?
Tom Dumont – (Laughs) The way this works has always intrigued me. This is a question you can answer better than me. You, who speaks Portuguese, while listening to a song in English, translated the letter or just understand the emotion of the tunes?

G1 – I think, first, people pay attention to what you call “emotion of the melodies.” Then try to translate the lyrics. But “do not speak” is not a difficult construction, I think many people could understand at least that part. The rest might be more difficult.
Tom Dumont – The funny thing is, as “Do not speak” became a huge hit around the world, our label even proposed: “If you could rewrite the song in different languages ​​- like Spanish, Portuguese – who you know not sell more records … “.

We just think that, as much as we love people around the world would not be authentic pretend to sing in different languages. There was not respected because other countries, it was not because we wanted to strive to be something we were not. At the beginning of the band, especially during the “Tragic kingdom” and in late 1990, curtíamos really travel to many place as we could. We were excited by the fact that people can sing our lyrics.

G1 – No new record, you tried to give a modernized sound of No Doubt?
Tom Dumont – Yes We inspire the music of the past and what is happening in music today. “Push and shove” [the title track] is really a crazy music at the verses there is a dance floor beat, somehow has a medium tempo house. But at the same time, it sounds like a very old ska 1960s. And then comes the chorus crazy.

We started hearing some music to inspire us and realized we had something close to dubstep there. Just a little. But is not that we wanted to make dubstep or something. I think it’s fun to take elements of things we found there. I do not know how people will react to this, but we love.

G1 – The No Doubt played recently at an event for fans too young, the Teen Choice Awards. In your opinion, what is the difference between today’s teens and the 1990s? At that time, buying up CDs
Tom Dumont – The culture has changed – and completely changed the way people listen to music. It’s true. When we were young, it was expensive to buy CDs [When buying] I listened to each track a hundred times, read all the letters of the booklet. Nowadays, it seems that nobody buys. People hear on YouTube, the Internet.

The fact is that we do not want to go back to what we were before, technology is always progressing. But is today, in the 1990s or earlier times, the music has to be good by itself, to make someone want to hear it. The key part is still the same. If music is not good, no one will bother to listen to it – on CD or YouTube.

G1 – In an interview to a website, you said that once practiced guitar for long hours, and who now only picks up only when the instrument is inspiration. The song would become a pleasure, and not an obligation. When you realize that?
Tom Dumont – When I was younger, I grew up listening to hard rock – heavy metal and guitar music …

G1 – Which artists?
Tom Dumont – Bands like Iron Maiden, Judas Priest, Rush, hard rock, anyway. Kiss, of course. Then, as a teenager, I was very interested in the technical skills demanded that the guitar, or how it could play as fast as Yngwie Malmsteen. I tried very hard to play that way, read magazines on guitar, practicing eight hours a day.

But at the time I entered the No Doubt when I was about 20 years old, I realized – first – that would never be like Yngwie Malmsteen, or as good at that level. And my musical horizons expanded, and realized that music involves much more than that. It involves emotions, feelings, stories that are told. I focused on the construction of melodies and songs – I was good enough as a player to do what he wanted.

It was a change of focus. The No Doubt helped me get to this point. I still love playing music and I take it seriously, but do not do like homework – do for fun.

G1 – Do you intend to come to Brazil? A single visit was 15 years ago.
Tom Dumont – I actually have a good friend who is Brazilian. He now lives in Sao Paulo, because of work, but lived in Long Beach for 15 years. We were talking about me visit him at the Olympics [in 2016], but I hope to come back and play with the band before that (laughs).

G1 – His fans also believe. Your friend showed you something about Brazilian music?
Tom Dumont – He likes the same things I do, hard rock, AC / DC, Iron Maiden, you know?

G1 – What are your memories of that trip to Brazil in 1990?
Tom Dumont – We really enjoyed ourselves very much. I have a very specific memory. In Rio we were near the beach, remember to swim in the sea at midnight, and had those bars near the beach, where you could buy beer and go back to the sea, then buy another beer – and so on.