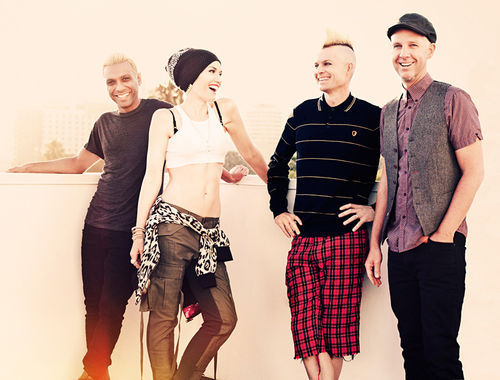 Check out a new No Doubt interview with AOL Music:

NEW YORK (AP) – When the members of No Doubt got together again to make new music, something unexpected came with them: a bit of doubt.

It had been 11 years since they’d put out Rock Steady and their priorities had changed. Each of the four had gotten married and had kids, producing eight babies between them. Music was no longer the most important thing in their lives.

Could they still make it work?

“That’s pretty complicated stuff when you start to really look at it,” 42-year-old lead singer and lyricist Gwen Stefani says. “You’re playing this role your whole life – the singer of No Doubt – totally committed to this in the greatest kind of way, and then all of a sudden, you’re saying, ‘Actually, you guys cannot be No. 1 anymore or else this is not going to work.'”

The band has somehow made it work. They return this month with their first studio CD in over a decade – Push and Shove, which blends their signature mix of ska and British New Wave with lyrics that reveal some anguish at their new lives.

“Here we go again/Are you insane?” Stefani sings in first single “Settle Down.” ”Don’t get me started/I’m trying to get a hold on this/Get in line and settle down.”

“I think a lot of the record I’m writing about being overwhelmed by trying to do all these things at one time,” Stefani says. “You just never know when you become a mom what it’s really going to be like. It’s so different than you think.”

In an interview at a downtown recording studio, the bandmates reveal few outward signs that it’s been 26 years since No Doubt formed. They all still wear eyeliner, have their hair bleached or in a mohawk – or both – and are stick-figure thin. Stefani herself seems to have defied time and can rock a midriff-baring top better than ever. Only their lunch leftovers – salmon, sliced fruit and healthy veggies – hint that they’re all in their 40s.

“Sometimes in my mind I still think I’m 16 onstage and my body tells me that I’m not 16 anymore,” says Tony Kanal, the 42-year-old bassist, laughing. “In our minds maybe we think we’re younger than we actually are.”

Just finding the time to record the album with all the different schedules was a challenge for a band whose past hits include “Just a Girl” and “Don’t Speak.” Add to that their notoriously exhausting recording process, and the months rushed past. The title of the album is no accident.

The first song for the new album, the radio-friendly “Undercover,” was written in 2009 following the last No Doubt tour and the rest was written the following year. Most of the album was recorded in 2011.

“It’s been a long time coming,” says Kanal, who for the first time became a co-lyricist with Stefani. “For me, the goal was just to get the record finished. To get us all in the same room at the same time with the amount of kids we all have between us was a struggle.”

Eleven years without new material is a lifetime in pop and the band returns to a changed musical landscape. Digital singles have replaced full-length CDs and the dance-pop-punk post-grunge banner has been hoisted by the likes of Pink, The Gossip and Avril Lavigne, to name just a few.

But the band insists they just make the music they like, without an eye to the marketplace. “It’s more about pleasing ourselves,” Stefani says. “It’s very selfish.”

So far, No Doubt has booked some high-profile appearances, such as the kickoff game for the 2012 NFL season, ABC’s “Good Morning America” and “The Ellen DeGeneres Show.” They plan a warm-up six-show stand at the Gibson Amphitheatre in Los Angeles after Thanksgiving and a European tour next year.

The album turned out to be much more upbeat than the bandmates expected, veering from the light summer fare of “Looking Hot” to the dreamy electronica of “One More Summer,” the almost folky “Undone” and the mainstream pop of “Sparkle” and “Heaven.”

“Those who sit and listen to the entire record, will get that – that we’re not after a specific thing. None of our records have been that way. They’re very broad in genre,” 43-year-old drummer Adrian Young says. “It used to work against us, before we got on the radio. We used to be told, ‘You guys need to focus, narrow your style.'”

During the band’s hiatus, each explored their own art. Stefani, who is married to former Bush lead singer Gavin Rossdale, put out two solo CDs, toured and designed clothes under her label L.A.M.B.

Kanal collaborated on two songs – “Sober” and “Funhouse” – with Pink and helped write songs with an array of artists, including Weezer, Shontelle and former Pussycat Doll Kimberly Wyatt.

They insist their chemistry is better than ever and that the time away recharged their batteries. Now this onetime garage band that endured rifts, long tours, writing block and mega-fame are now happy that their music is no longer their first love.

“The band was No. 1 in our lives for a long time and that’s changed, but we’ve been able to survive that,” says Dumont, 44. “It’s No. 2 now, but we all share this work together. We built this whole thing together and we’re still trying to protect it and make it the best thing we can.”