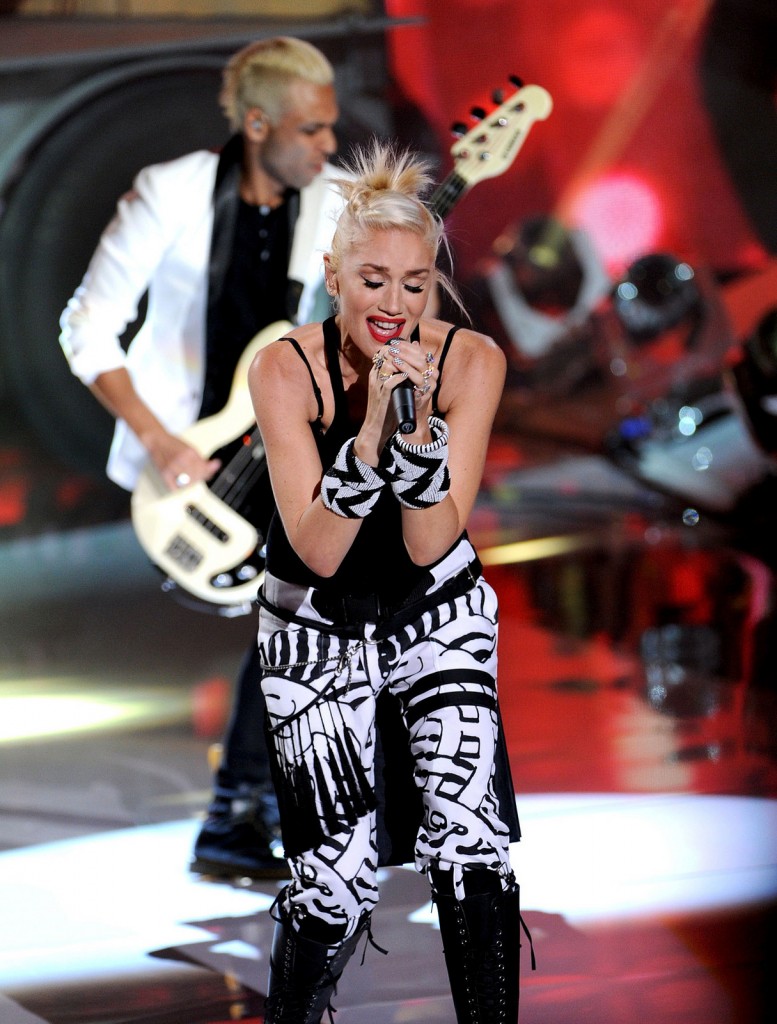 Check out a cool new interview with Gwen and Tony that’s featured in New York Magazine’s Fall Preview issue;they discuss recording the new album,making the ”Settle Down” video and balancing career with family.

Brace yourselves, children of the nineties: Next month, No Doubt will release its first new album in eleven years. It’s called Push and Shove, and judging from its lead-off single, “Settle Down,” you may be in for some vintage No Doubt sounds (think: bouncy dance-hall rhythms and strutting guitar riffs). We spoke with lead singer Gwen Stefani — who, between albums, married Gavin Rossdale and gave birth to two boys, three fashion lines, and two solo records — and bassist Tony Kanal for New York Magazine’s Fall Preview issue. Herewith, a more complete look at our conversation.

Where were you guys at as a band after your last album, Rock Steady, in 2001?
Stefani: We were just burned out; we had toured so, so much, and it takes so much of yourself. I think we decided we really just wanted to take a break. I got married and decided I wanted to do a dance record, and I didn’t ever expect for it to be what it was or for the No Doubt thing to be such a long break, but it was one of those things where you just had to sort of follow your inspiration. And then as soon as I was done with that last [solo] tour, I was done. I was like, Okay, I’m ready; I’m so ready for the No Doubt record. And then I got pregnant with Zuma [her youngest son], and it was really challenging to be pregnant and come off all the stuff I had done, and try to write. And that’s why things got really delayed; it was like, impossible. I just couldn’t do it; I had nothing left to give. And when I finally had [Zuma], we said, “Let’s just go on tour and try to get inspired.” And when we came off tour we wrote our first song.
Kanal: When we got onstage together, just reconnecting and playing music together, it was such a big deal for us. It kind of brought us back to what we started the band for in the first place, which was just to get onstage and play music. I think reminding ourselves about that and doing it in front of tons of people really helped us get inspired and gain our confidence back to get back in the writing studio

In the time in between, did you guys meet at all to play around and feel things out?
Stefani: Well, we don’t jam. Come on, Tony!
Kanal: We don’t jam, we haven’t jammed for a while. [Laughs.] But in the years we weren’t making music, we were seeing each other all the time, at kids birthday parties or social events. There was always stuff going on. As much as there was a break, it never felt like, Oh my God, I haven’t talked to that person in forever.
Stefani: Tony worked so much on my records; we were together a lot.
Kanal: I think I even went to see you play on tour, too …
Stefani: Yeah, you did.

Gwen, when you mention feeling like you were definitely ready to get back to No Doubt. What was it specifically that you felt was missing?
Stefani: There’s nothing that compares to being in a band with your best friends you’ve known all these years. Playing live is so automatic and so electric. That whole period when I got to do [solo] records, to me it was indulging my theatrical side, and getting to be really creative that way; like, do costumes, and costume changes; do music that was electronic and not have to worry about a drummer or anything else — songs that were never really meant to be taken seriously, just for fun. It was just a project I did that was very inspired, and it kind of got a little out of control, really. [Laughs.] But there’s no place like home; we’re so comfortable together, we understand each other. It feels, like, normal. Whereas that [solo] period felt like I was trying to be something, and play a role, and pretend.
Kanal: The one thing I know about Gwen is when she’s inspired, you kind of have to get out of her way. To see her manifest this whole new kind of world on the dance records or on her clothing lines, this empire she’s built, is so amazing. Yesterday, I watched her introduce the First Lady of the United States — she hosted Michelle Obama at her house. It really brought things full circle for me; it was like, That’s my friend who I’ve known since I was 16 years old, hosting the First Lady at her house. I was just incredibly proud of her.
Stefani: Oh, Tony! That’s so sweet!

Tell me about the idea behind the video for “Settle Down.” It’s so warm and fuzzy and nostalgia-y, down to Gwen’s outfit.
Kanal: I had this idea of all of us kind of driving from separate places and coming back together, literally: meeting in this undisclosed barren desert location and playing music and dancing, just getting back to what we do. So we called Sophie Muller, who we’ve collaborated with on tons of videos, and she got more excited about it than even we were. I kind of joked around: “Wouldn’t it be cool to have people doing, like, a Jamaican country line dance?” ‘Cause it has this weird country-esque melody in it. So Sophie and our choreographer, Fatima, went to a Jamaican nightclub and picked out the best dancers and asked if they wanted to be a in a No Doubt video. And now there’s this cool, surreal line dance in the video. But I know what you’re talking about, that one moment when we all kind of see each other and give each other big hugs. It’s a very cool, emotional moment.

Even though it was staged, did you guys really feel that moment?
Kanal: [Laughing.] It wasn’t staged!
Stefani: We were totally acting! It was the middle of the night, are you kidding me?
Kanal: No, it was seriously, like, four in the morning. We all have kids, so we’re usually waking up at four in the morning, not filming videos.

Since we haven’t heard the full album yet, are there any specific songs you can call out that have a particularly good backstory?
Kanal: On this record, we spent a lot of time fine-tuning songs. Sometimes we’d spend a week working on a verse, and then say, “Okay, the verse is great.” And then write the chorus and say, “That chorus is amazing, the verse isn’t good.” And we’d go back and spend two weeks on the verse. We didn’t have the luxury like in the past of writing 30 songs and pick the best 10. This was, like, every song had to count. And the eleven songs we have are the eleven songs we wrote.
Stefani: To write an album takes so much focus and selfish time, to just write and think about your life. For me. Maybe not for other people. My husband, for instance, can write a whole album in two weeks and record it and be done. But for me, it takes such a long time.

Much has been made of the fact that you’re all parents now. Has that mellowed the group out at all?
Stefani: I don’t think it’s mellowed us out, but priorities have to change. Before, it was unspoken that the band was the No. 1 thing; there was not a girlfriend or someone else that could be before the band. It wasn’t even something we discussed, it just was what it was. But we’re at a stage where we don’t have to be like that anymore; we can kind of do this when we want to do it. Like today, for instance, I told them, “I cannot do twelve-hour days anymore, stop it!” [Laughs.] I just missed Kingston and Zuma going to sleep. But I get to talk to you, and it’s actually a nice break — my kids are so much work. [Laughs.] No Spider-Man for me tonight, but that’s okay. I’ll take a break.