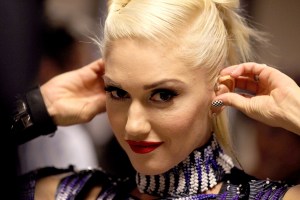 Gwen called into Carson Daly’s show on LA’s AMP Radio 97.1 this morning to talk about the new album-she also mentioned that No Doubt will be shooting the music video for ”Looking Hot” when they return from Europe! Listen to the full interview here.

After an 11-year hiatus, the wait is finally over.

No Doubt’s highly-anticipated Push and Shove hit shelves Tuesday morning and while hustling around the globe to promote the album, lead singer Gwen Stefani called into the morning show for a catch up session with Carson.

Stefani says she is excited that the record is finally done, but it was a labor of love unlike any other album she’s made before.

“This is definitely the hardest record out of every record I’ve made just because, you know, I would get up with the kids and do that whole thing all day long, which is exhausting,” Gwen explained. “That’s harder than anything else, and then go to the studio at like four in the afternoon and feel bad for leaving them and then like force myself to try and write songs and if nothing happened that night, [I’d] feel like a complete failure, like I just let everyone down.”

The whole landscape of music has changed since No Doubt released their last album, Rock Steady, in 2001. YouTube and the iTunes Store didn’t exist and even the iPod had only been around for about a month. Nevertheless, No Doubt didn’t feel pressured to sound like what they hear on the radio these days.

“We didn’t listen to anything modern, but the one thing that was modern about it was our producer Spike, who brought in a lot of different programmers that would do almost like remixes of the songs and then we would take bits of that and then rewrite or even rerecord songs. So there was a lot of rewriting and rerecording and overdoing and redoing. I think that’s what gave the modern sound to the record.”

Instead, they drew inspiration from some of their own favorite artists, including Depeche Mode and one hit wonders from the 1970s.

“We would sit and listen to like two hours of music before we even got started just to get a point of reference, like, ‘Oh, I wish I wrote ‘Time After Time’ by Cyndi Lauper.’ And then that would be like the song we tried to write that night and it never sounds like that.”

Tuesday not only marks the release of Push and Shove, but also the debut of the music video for the title track.

But there’s no rest for the weary. When No Doubt returns home from Europe, they’ll start shooting the music video for their next single, “Looking Hot” and starting in late November, the band will play several dates at Gibson Amphitheatre.

Carson couldn’t let Gwen go without asking if she had heard about Flavor Flav’s hilarious mix-up over the weekend. He mistook Miley Cyrus for Gwen Stefani at a music festival and the whole incident was caught on tape.

Stefani actually ran into the rapper afterwards and laughed it off.

“He was like, ‘Oh my god, I’m so embarrassed! I came up to Miley Cyrus and I thought it was you!’ And he was like, ‘But it’s okay because like, I just, you know, like whatever!’”

Listen to Carson’s full interview with Gwen Stefani below!