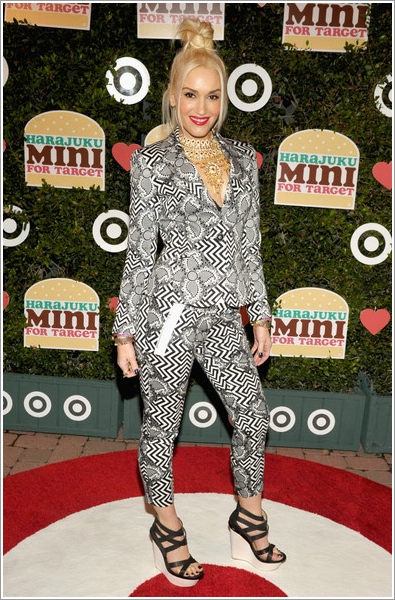 The Huffington Post has posted an article with quotes from Gwen about balancing motherhood with her career,including wrapping up the new No Doubt album and her fashion lines. Gwen also talks about learning to sew from her creative mom,and about designing the Harajuku Mini line;the article mentions that a new installment of Harajuku Mini will be hitting Target stores and Target.com next Monday,May 7. We had posted a few photos of the summer-ready installment here;of course another new collection of Harajuku Mini will be debuting on July 8.

NEW YORK — Gwen Stefani is no stranger to multitasking, juggling her music career – she’s wrapping up a new album with No Doubt – and her fashion projects, which include the debut of the newest Harajuku Mini collection at Target next week.

But, Stefani says, it’s her sons that mostly keep her on her toes. Some days, running Kingston, 6, and Zuma, 4, back and forth to school, doing homework and tucking them into bed seems to take up the biggest part of her day.

“I like to be with them whenever I can, of course,” the 42-year-old singer-designer says.

Her mother was very hands-on, and Stefani says that’s what she’s striving to do. Some of her favorite memories include wearing Holly Hobbie bonnets and velvet dresses with lace collars that her mother made for her.

“Growing up, I had a really amazing mom who was really creative. She made stuff for every holiday, and I learned how to sew. … She has really good style – and I feel like my parents let me be creative – but they’d always check my skirt length,” Stefani says. “They were strict.”

Stefani has been designing her LAMB line for women for nine years, so, she says, this collaboration on a children’s line came pretty easily because she knows the design and manufacturing process, has more ideas than she knows what to do with, and has learned to edit herself for a clear, consumer-friendly message.

Plus, how much fun is it to dress up grade-school girls?

“When I first started this line, I thought it was going to be for under 5, but Target wanted me to do the bigger girls, which is a really strange age,” she says. “They’re so inspired by things they see, trying to find themselves, expressing themselves, they’re influenced by friends, what they see on TV and the Internet. I thought it sounded like a big job but I’ve gotten into it.”

The clothes, available in stores Monday, are a mix of the girlie frills and masculine silhouettes that Stefani says are staples of her own wardrobe.

And she’s conscious of being age-appropriate.

“That part is challenging,” she says, “but I think we’ve done a good job.”

Yet, while tween girls are willingly to take style advice from Stefani, her boys have no problem saying “no,” especially Kingston, who likes to pick his own outfits any chance he gets because he wears a uniform during school, she says.

“I do like to do a matching outfit at holiday time,” she says.