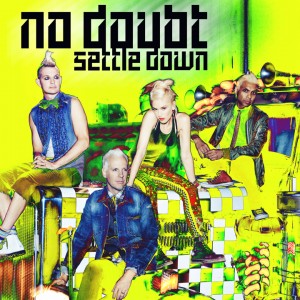 How exciting! Our good friend Kristen Kurtis,who is music director at radio station KGSR in Austin,Texas,met with her local Interscope rep tonight and actually got to hear ‘’Settle Down’’!! Kristen was gracious enough to share with us a brief review of of the song-she wasn’t able to reveal too much because she was told that Interscope is understandably being VERY cautious in preventing the single and album from leaking. Kristen did however confirm that the song does contain the lyrics posted on the official No Doubt forum by a fan who had claimed to hear it,and said that it is No Doubt’s take on pop music right now,exclaiming that it is ”smart and FUN and catchy as hell!” She was also told that other radio stations in her region think it will be an absolute smash hit! We think so,too! Thanks SO much to Kristen for sharing-July 16 seriously cannot come fast enough!

They are SERIOUS about making sure this song/album doesn’t leak. They’ve embedded names of Interscope employees in the track so if it does get out, they’ll know who’s to blame! That being said, obviously I can’t reveal too much …but I can confirm everything the guy reported to @NDCforum re: lyrical content. It’s @gwenstefani solo meets @nodoubt. Doesn’t remind me of any era in particular but was exactly what I was hoping for. Catchy as hell; @nodoubt’s take on pop music right now. So smart and FUN and catchy! I’m told most stations that have heard it in this region think it will be a SMASH and I agree. It’s SO good, you guys. “Get in liiine and settle down!”