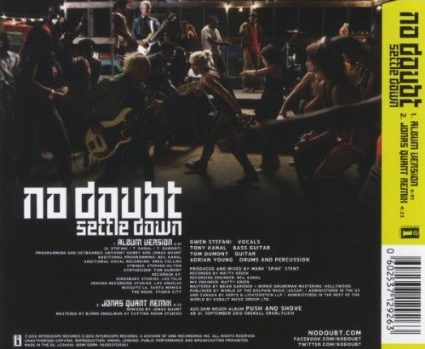 Thanks so much to nodoubt.me and yeahyeahyeah from the official No Doubt forum,check out a photo of the back of the 2-track ”Settle Down” single CD that’s available now in Germany;the CD lists a few more interesting details about the song’s recording.

i got it at the store today, they’ve placed it on a special spot saying “NEW!” and i guess a lot of people already bought it, because they didn’t have that many.

feels so good to hold a new ND single in my hands. i remember running to the store whenever a new RS single was released…aaaah memories

too bad it only has this one remix and no “real” b-side… but we kinda new it was coming down to this, didn’t we?