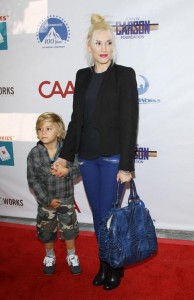 UPDATE: X17,the original source of the story,is now reporting that Gwen DID NOT collapse and was NOT treated by EMTs at the carnival-the ambulance was called for another guest at the event. We are relieved that Gwen is OK and apologize for any confusion and undue concern for Gwen’s health-it’s just another reason not to trust sites like X17,even when the story does seem credible.

UPDATE – MORE sources from the school are now telling us Gwen was NOT treated by the EMT … the ambulance was called for another guest at the event.

News spread through the carnival that Stefani had collapsed but we’ve confirmed now that our original source was wrong — Gwen’s just fine! In fact, we spotted her grocery shopping just and hour and a half after the ambulance arrived at the school!

Several sites such as X17 and Celebuzz are reporting that Gwen apparently fainted this afternoon while attending an outside carnival at Kingston’s school;an ambulance was called and medics gave Gwen a checkup at the scene. While we generally do not trust news items posted on gossip sites such as these,this item does seem credible since a security guard at the event confirmed that Gwen was advised to go home and rest-she was driven home by her assistant and didn’t require any further medical treatment. We know Gwen has been extremely busy wrapping up work on the No Doubt album,in addition to working on her three fashion lines and caring for her sons-if this report is true,we hope she can get some rest and is feeling much better soon! Sending her all our love and best wishes!

Gwen Stefani gave her children quite a scare when ambulances were called after she had passed out at his school function on Sunday. According to X17 Online, Stefani was attending an outdoor carnival at her son Kingston Rossdale’s school when she had fainted. An ambulance was called and medics checked up on the 42-year-old “Hollaback Girl” singer.

A security guard at the event reported that Stefani was advised to go home and rest. Gwen was driven home by her assistant and did not appear to seek further medical treatment.