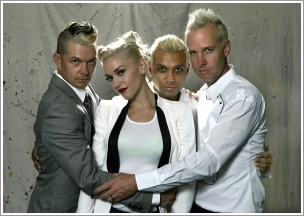 No Doubt is featured on yet another Most Anticipated Albums of 2012 list-this time from Android Market! The site has ”Just A Girl” on their playlist of ”Stars Set To Shine In 2012”.

Most Anticipated Albums of 2012
By Nick Dedina

2012’s shaping up to be an exciting year in music. In pop, Madonna returns to do battle with young colts like the stylish Nicki Minaj or the more emotive Leona Lewis, who has nothing on Latin lover Juanes in the feelings department. Bruce Springsteen headlines a returning rock class that includes a reformed No Doubt fronted by Gwen Stefani, while Queens of the Stone Age will try to finally strike it rich the way metal stalwarts Lamb of God have. Indie rapper Kid Cudi sets out to prove he’s still smoky fresh, while Asher Roth maintains his college fan allegiances and Rick Ross aims to show that tougher hip-hop will never go out of style. Dierks Bentley and Martina McBride keep it country-strong, while Esperanza Spalding sees if she can hold on to her jazz audience as she brings Stevie Wonder/Joni Mitchell-style sophistication back to R&B. Finally, since just about everyone now sounds like Air, the trendsetting retro-groovy synthpop band returns to show us how it’s really done.

UPDATE: And anotherone! No Doubt has also made The Hollywood Reporter’s list of the Most Anticipated Albums of 2012!

No Doubt
Title: TBA
Due Out: This century

Fans have waited more than a decade for new No Doubt music. After all, Rock Steady, which featured a few of the band’s biggest hits (among them: “Hey Baby” and the Grammy-winning “Underneath it All”) came out in December 2001. Since then, Gwen Stefani has seen massive success as a solo artist and fashion designer, while the band that made her a household name has taken an extended hiatus.

The four original members, Stefani, Tom Dumont, Tony Kanal and Adrian Young returned to the recording studio in 2008 but a new album has been pushed back several times prompting many to wonder: will it finally see the light of day in 2012? No release date has been announced, but the band is keeping fans in the know by updating their official website, revealing that they would be collaborating with production duo Major Lazer and reassuring all that the new album is “well underway.” The band also took to twitter to document the process thus far. “The No Doubt studio sesh is thumping today,” guitarist Dumont tweeted Nov. 30. “Smiles all around!” (James Hermon)