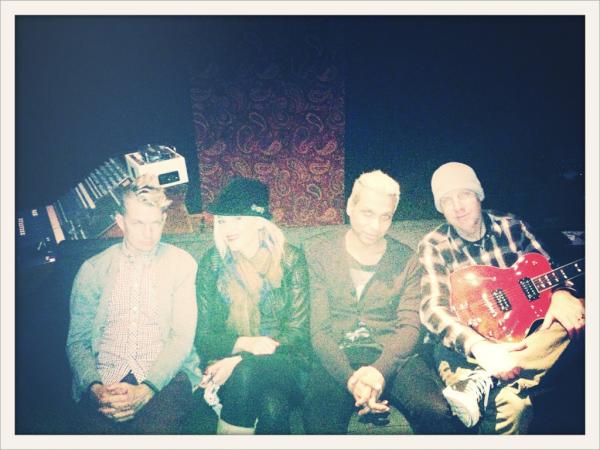 The media has been buzzing over No Doubt’s recent tweets about being back in the studio all together to continue work on the album. It’s nice to know the media is as excited by their updates-and for the new album-as we are!!

Gwen Stefani has returned to studio with her No Doubt bandmates to make new music for an upcoming project. A picture featuring the foursome hanging out in the studio has been shared on Twitter along with updates from Tony Kanal and Tom Dumont.

Tony wrote, “Gwen back in the studio with us. Nothing like having the four of us in the same room making music. Let’s do this!” Tom then added, “Sometimes making music is easy and fun and everything just works. Gotta celebrate the good days!”

It’s been over 10 years since No Doubt released their critically acclaimed album “Rock Steady”. They hinted a reunion in November 2008, and later followed it up with a tour featuring Paramore in 2009. Talks and rumors about their new album intensified in the months leading to 2011.

Last summer, they hit the studio with Major Lazer. “We’re working on 3 different songs tonight [sic] in 3 different rooms in the same studio complex, all at once. Like magic, somehow it works. @majorlazer in one of those rooms. Cutting drums with Adrian [Young] at the moment,” Tom informed his Twitter followers back then.

After taking a short break, Gwen Stefani is back in the studio with No Doubt recording their upcoming record.

According to Just Jared, Stefani arrived at the LAX airport in Los Angeles on Tuesday (Jan 24) in order to rejoin her bandmates. This will be the band’s first studio album in over 10 years.

In 2009, No Doubt, consisting of Stefani, Tony Kanal, Adrian Young, and Tom Dumont, decided to embark on a US national tour rather than put out an album first. The band wanted to get back on the road and become inspired once again by their fans.

From their personal Twitter , the band has been constantly tweeting updates on the new album as well as posting pictures of their time in the studio.

“Gwen back in the studio with us. Nothing like having the four of us in the same room making music. Let’s do this!” Kanal tweeted, reported by Thecelebritynews.biz.

Dumont then followed with a tweet of his own, “Sometimes making music is easy and fun and everything just works. Gotta celebrate the good days!”

No Doubt formed in 1986 and have since won 2 Grammys and sold 35 million records worldwide.

The band recorded their last studio album Rock Steady in 2001. Afterwards, they released a compilation album of the band’s singles, including a cover of the song “It’s My Life,” originally recorded by Talk Talk. This performance earned them a Grammy nomination. Another compilation album of B-sides, remixes and rare songs entitled Everything in Time was released in 2003.

No Doubt went on hiatus from 2004-2008 and Stefani embarked on a solo career and also gave birth to her two sons, Kingston and Zuma.

Fans have long anticipated a new album from the band. A release date however, has yet to be set.