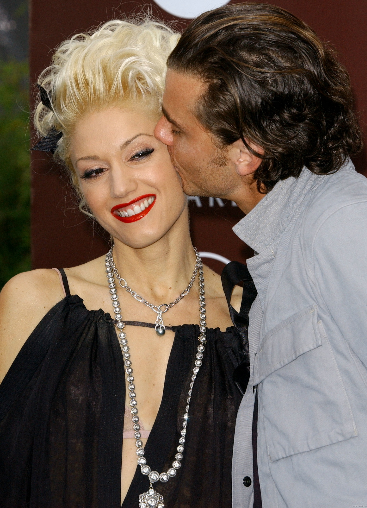 Just in time for Valentine’s Day,Gwen and Gavin are included in EntertainmentWise’s True Hollywood Love: The Ultimate Celebrity Couples gallery.

With all the celebrity divorces – Heidi, Katy, Demi and how can you forget Kim Kardashian!? – you would be forgiven for thinking that love doesn’t last in Hollywood. But don’t lose faith just yet there are lots of couples who prove that you can find true love in celebville.

Let’s face it we all love a good romance. Even though we want all the juicy details when they split it’s still devastating to know the fairy tale didn’t come true – Reese and Ryan, Brad and Jen, where did it all go wrong?

With Hollywood marriages struggling to get past the one year mark these celebs deserve a medal! Tom Hanks, Denzel Washington and Ozzy Osbourne have been with their partners over 20 years, that’s about 100 years for us mere mortals.

Maybe not getting married is the key? Goldie Hawn and Kurt Russell have been together over twenty years but never got married and despite rumours Brad Pitt and Angelina Jolie have denied they are getting hitched and are more in love than ever after seven years together.

Or is double dating the answer? Best friends Ben Affleck and Matt Damon both manage to have successful marriages that they keep out of the limelight. Ben is expecting his third child with wife Jennifer Garner and with daughters Violet and Seraphina are one of the cutest families in Hollywood.

But who is your favourite? Super cool Jay-Z and Beyonce or rock royalty Gwen Stefani and Gavin Rossdale? Prince William and Kate Middleton surely take the crown for the ultimate fairy-tale romance.

Gwen Stefani and Gavin Rossdale first met when their bands ‘No Doubt’ and ‘Bush’ were on tour together in the US. That was in 1995 and two sons later the gorgeous pair are still going strong.